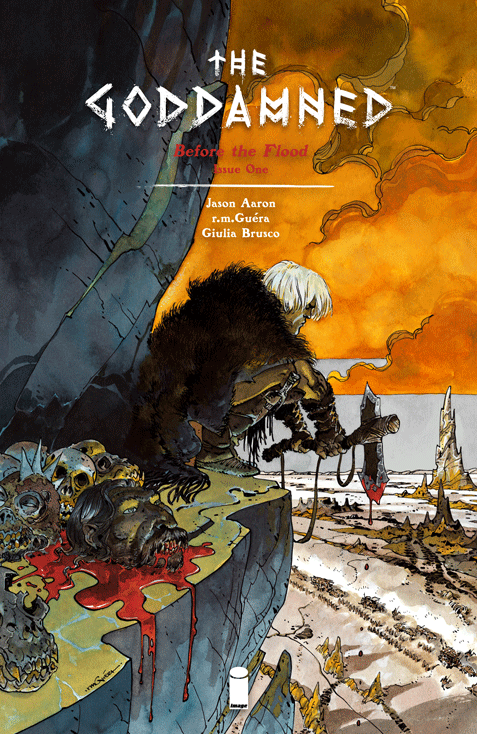 (Victor Valley)– When ordering The Goddamned, I did so by glancing at the art and checking to see who the creators were. With Jason Aaron writing and R.M. Guera providing the visuals, I felt confident that I could order it without knowing much of the premise and be in for a treat. This is the team that brought the world Scalped after all. Well, they did not disappoint, as The Goddamned #1 pulled me into a world so gritty, so frightening, that I had to keep reading.

Set before the biblical flood, we see a world that is likened more to hell than to the Earth we know. Death and decay is everywhere, the inhabitants of this world are vulgar and filthy, as is our protagonist. I will keep his name out of it, that way if you approach the book like I did, you will be surprised to see who he is and what exactly is going on here. Our “hero” appears to have a bit of immortality with him, as he cannot die. We see this loner awaken in a pile of excrement and death at the beginning of the book, as he goes to dispatch those that left him for dead in a brutal, non-civilized fashion.

Aaron takes a setting of the pre-flood, a setting many stories have taken in the past, and infuses a stark grittiness to it that I have never seen. This is a world so ugly, so barbaric, that I think we would all want the flood to come down and wash away the worst of humanity. Guera’s artwork is an absolute perfect fit, as his eye for detail and design makes this world so entrancing, so in-your-face, that it pulls you in immediately.

This is a mature readers title, if you couldn’t tell yet. There is language, brutal violence and some nudity; none which feels forced or out of place, which really shows that these storytellers know exactly what they are doing with this book. By the end of the first issue, we have a better idea of who is who, and we get a shocking looking at the book’s take on a large biblical figure. This is an excellent start to this breath of fresh air series- I can’t wait to see what’s in store for the future.

Rating: 5 out of 5. If you can stomach the brutality and swear words, then you are in for one hell of a book.