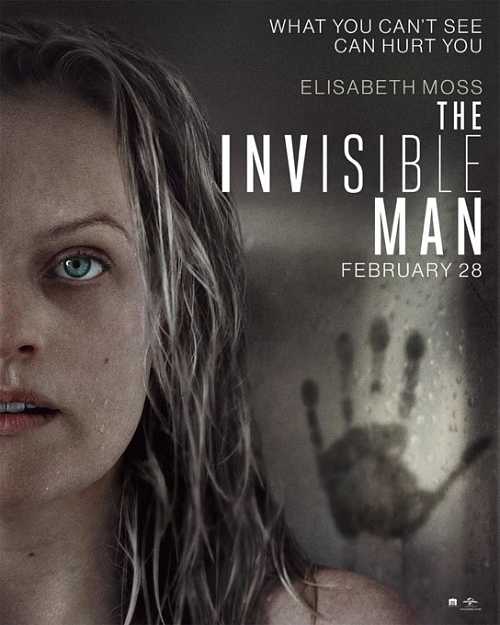 Director Leigh Wanell’s updated version of Universal’s “The Invisible Man” is a pulse-pounding experiment in tension and horror. It exceeds expectations while also subverting modern horror tropes. It’s not an easy movie to watch, especially if you have been a victim of domestic violence or any abuse, but it’s a great movie that will make you second guess your gut feeling that somebody is watching you.

While the original novel by H.G. Wells, the 1933 Universal film and other adaptations made the Invisible Man the central character, this version changes that. The main character this time is Cecilia Kass, portrayed to perfection by Elizabeth Moss. The film opens after Cecilia has finally planned her escape from her abusive and controlling boyfriend Adrian (played maliciously by Oliver Jackson-Cohen), and she finally makes her move. In one of the most stressful and tense opening sequences seen in a film, she gets out of the house and finally has her freedom, or so she thinks.

A couple of months go by, and she is working on becoming one with herself again. She is staying with her friend James (Aldis Hodge), who is a cop, and his teen daughter Sydney (Storm Reid). James has been helping her get over her fear of Adrien by making her do little things like check the mail and just walking outside to prove that he isn’t around anymore. One day, her sister Emily (Harriet Dyer) drops by to give her some news; Adrian was found dead from an apparent suicide. Relieved that it’s all finally over, Cecilia starts to move on with her life, until weird and brutal things begin to happen to her and everyone she loves. Soon, she starts to realize the uncomfortable truth that Adrien might still be alive, and he’s found a way to become invisible and torture her. The worst part is that nobody believes her and she must face him on her own.

The Invisible Man is one of the first movies in a long time that truly surprised me and had me at the edge of my seat. There is a scene at around the midpoint of the film that made my jaw drop, and there was an audible gasp from the audience I was watching it with. I’m a massive proponent of watching movies, especially horror movies, in a theater full of people. When the film is done right, it’s the best feeling sharing that scare, or even that laugh, with others. This is one of those films. Not only is it incredibly well made, but it’s also one that you should watch with a group of people, it’s that kind of movie.

By putting the focus on Cecilia instead of Adrian, you get to experience the terror along with her. While the novel and the other films are scary in their own right (following the scientist as he descends into madness), this one puts you in the shoes of the victim. We are with her the whole time, and no frame is wasted in telling the story. There are seconds of screen time where nothing is happening, it appears to be an empty frame, but you don’t know. Even after seeing the movie, I couldn’t tell you if the titular character was there or not half of the time. You are always expecting something to happen, and sometimes it does, but often it doesn’t. The movie does have a lot of jump scares, but it doesn’t rely on them. The whole film is really about building the tension, and it does it incredibly well.

That tension and terror would be nothing if it didn’t have the performances to make it believable, and Elizabeth Moss ultimately carries this film. Throughout a considerable chunk of the movie, she is acting against nothing, and that is not an easy task. She is terrific in this, and if the Academy paid any attention to the horror genre, she would be an early contender for Best Actress. The way she reacts to what is going on around her is astounding, she is completely raw, and the emotion feels real. Everyone else in the film does great too, but she is easily the best thing about the film. I’m completely comfortable in saying that she is a real movie star, and I can’t wait to see what she does next.

Universal Pictures played it smart when they allowed Blumhouse to reboot this property, which was supposed to be a part of their Dark Universe series of films. After the disaster that was the Tom Cruise starring “The Mummy” years ago, they decided it was best to go a different route. And it’s a good thing they did. They took a known property with The Invisible Man and did something unique and different with it, and I can’t wait to see what they do next with the recently announced Dracula film. If it’s anything like this film, it’s going to be great.