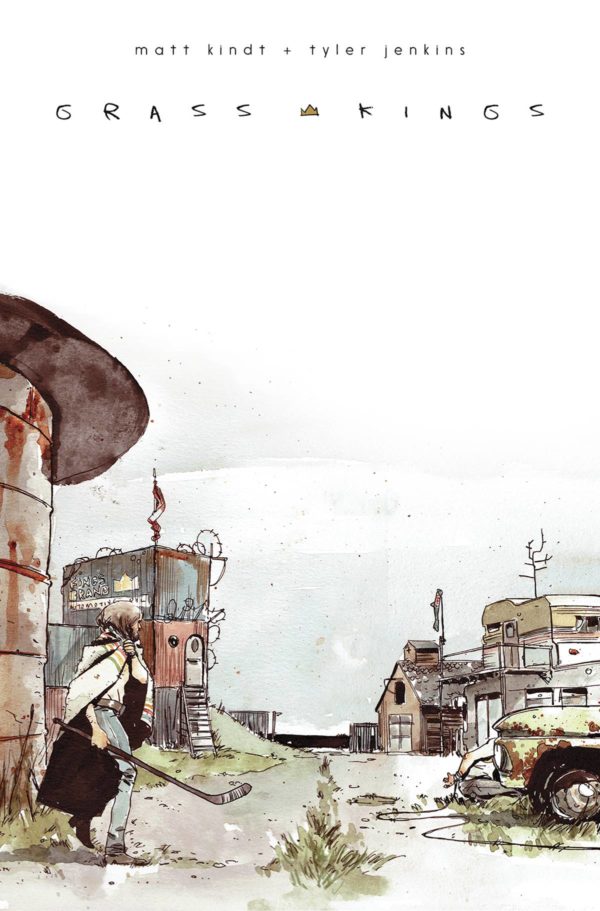 Boom! Studios Grass Kings lives off the grid, but should be on your radar

Boom! Studios has released the first issue for what is sure to be a game changer for their publishing line up. From the minds of Matt Kindt (Dept H, Divinity) and Tyler Jenkins (Peter Panzerfaust), Grass Kings starts off spanning through the centuries, showing the betrayal of man, and then to the here and now, which brings us to a squatter community known as the Grass Kingdom, ruled by a broken down man, Robert, and his brothers.

We see a “spy” from the neighboring town of Cargill get caught by Bruce, Robert’s brother and the kingdom’s self imposed Sheriff. It is through Bruce we get a ride along introduction to the people of the Grass Kingdom, which seems to have a lot of easy going, hard working folks. But with Robert, we have a man broken down from the loss of his little girl Rose, whom is inferred to have been washed away in the river. At the end of the issue, we see a young woman emerge from the water, who Robert hopes is his long lost daughter.

Kindt and Jenkins create another thought provoking book, one that looks absolutely fantastic thanks to the watercolor stylings of Jenkins. We see that there is something brewing with the Sheriff from Cargill, and a longtime operation against the Grass Kingdom. What is the kingdom really all about? Why do they live the way they do, off the grid and away from the rest of the world?

Kindt and Jenkins have created a very unique debut issue with Grass Kings. From the artistic style to the smart script, this is a really great start to what seems to be another hit series from Boom! Studios. Check out Grass Kings #1 and see what the kingdom is all about.