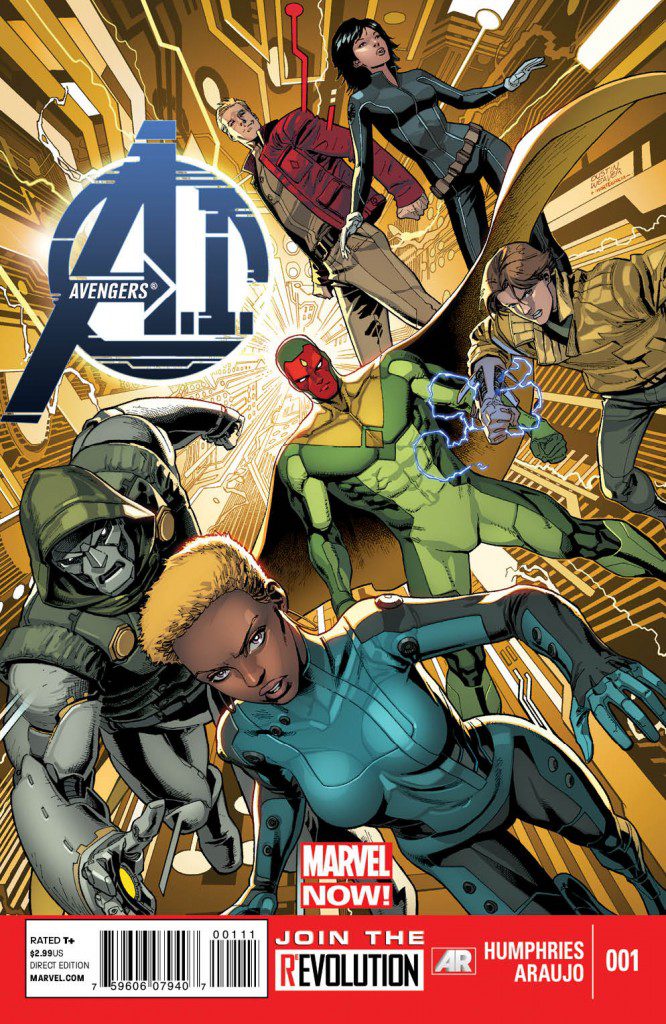 A brave new world is unleashed and only one team of Earth’s Mightiest Heroes can save us from the future. Gathered together by Hank Pym, The Vision leads Victor Mancha, Doombot, and the mysterious Alexis in a race to contain an unfathomable Pandora’s Box of destruction! And which side will Monica Chang, Agent of S.H.I.E.L.D., find herself on?

“Springing out of the increasingly razor-thin crawlspace between the organic and synthetic worlds comes ‘Avengers A.I.’,” said Axel Alonso, Editor In Chief, Marvel Entertainment.  “When one of the Marvel Universe’s preeminent brainiacs, Hank Pym, embarks on a long road to redemption, he must assemble a team unlike any other, a team composed of heroes that will challenge the very definition of ‘Artificial Intelligence’ and the way you look at super heroes.”

Following the harrowing events of Age Of Ultron, can Hank Pym & The Vision lead a team into the digital unknown?

“I could not be more psyched to be ushering the Avengers and the Marvel Universe into the Age of A.I.” explained Humphries. “This book is futureshock crashing into the world outside your window. Once the A.I.s are unleashed, there is no turning back. Even the phone in your pocket could be a threat against humanity. It’s an exciting and dangerous new era for Earth’s Mightiest Heroes.”

Each issue of Avengers A.I. features special augmented reality content available exclusive through the Marvel AR app – including cover recaps, behind the scenes features and more that add value to your reading experience at no additional cost.

This July, Sam Humphries and Andre Araujo redefine what it means to be Earth’s Mightiest in Avengers A.I. #1!

For more on Marvel NOW!, please visit now.marvel.com and join the conversation on Twitter using #MarvelNOW.