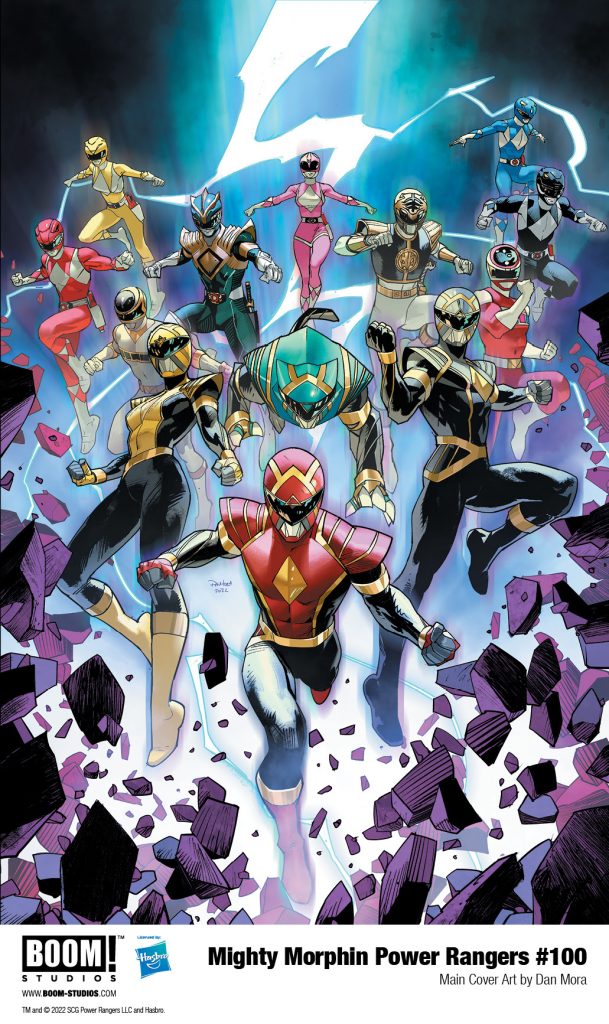 BOOM! Studios, under license by Hasbro, Inc. (NASDAQ: HAS), announced that artist Daniele Di Nicuolo (Seven Secrets) will return as a guest artist on the special oversized issue MIGHTY MORPHIN POWER RANGERS #100 to celebrate the historic milestone issue of the bestselling comic book series based on the global pop culture phenomenon. The CHARGE TO 100 builds to a celebratory and shocking 100th issue from acclaimed writer Ryan Parrott (Mighty Morphin Power Rangers/TMNT), series artists Marco Renna and Moisés Hidalgo, as well as the return of several all-star fan favorites as guest artists on this epic culmination of a story years in the making, available in September 2022.

Each copy of MIGHTY MORPHIN POWER RANGERS #100 will also contain 1 of 10 random collectible trading cards featuring your favorite Rangers and villains, as well as an exclusive art print by a superstar artist!

A legacy that began in Mighty Morphin Power Rangers and Go Go Power Rangers finally converges here as CHARGE TO 100 reaches its milestone issue—and kicks off brand new beginnings! Rangers fans will not want to miss Ryan Parrott’s FINAL issue on the main series, joined by a superstar lineup of returning artists.

Print copies of MIGHTY MORPHIN POWER RANGERS #100 will be available for sale in September 2022 at local comic book shops (use comicshoplocator.com to find the one nearest you), or at the BOOM! Studios webstore. Digital copies can be purchased from content providers like comiXology, iBooks, Google Play, and Kindle.

For continuing news on MIGHTY MORPHIN series and more from BOOM! Studios, stay tuned to boom-studios.com and follow @boomstudios on Twitter.