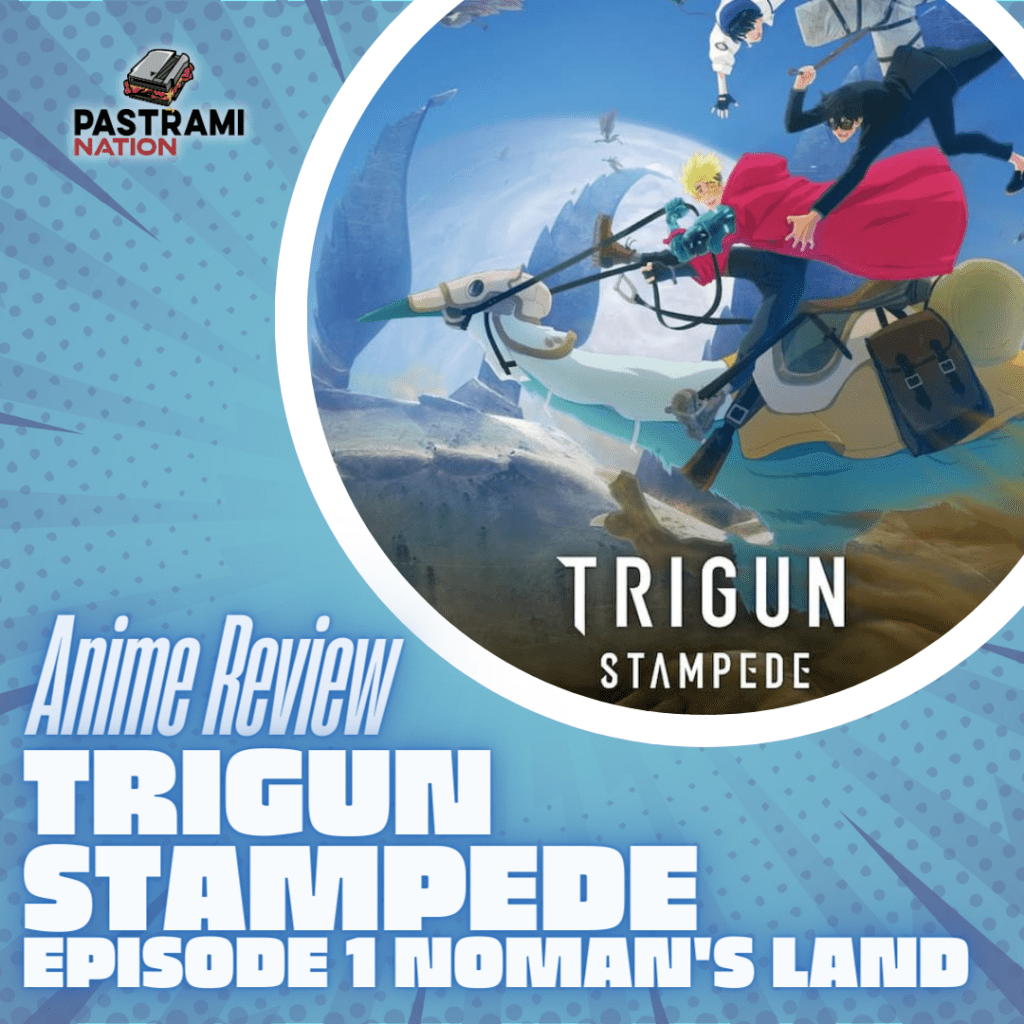 The original Trigun anime series is one of my absolute favorite anime series. The bumbling yet dangerous Vash the Stampede, who has a $$60 Billion bounty on his head with rumors that he blew a hole through the moon, being constantly tracked by the insurance agents Meryl and Millie, and the mysterious traveling priest: you want to talk about an eclectic group, that was it. For some reason, the time has come to remake the classic- enter Trigun Stampede.

So let’s look at the first episode: Noman’s Land gives us a lot, and maybe too much for a first episode. The episode has fluid, amazing animation with CGI elements. Also, the series is only subtitled at the moment, so there is no rating for voice acting as I just read my way through the episode. It starts with a look at Vash and his brother as kids on a space station of sorts with Rem when calamity strikes. The brothers are whisked away in an escape pod. Fast forward to adulthood, and Vash is a red jacket-clad vigilante on the run with a $$6 million dollar bounty (way lower than the original series, sadly). Meryl appears as a beginner journalist with a more seasoned vet, who reminds her constantly that she’s still a rookie. They cross paths with Vash as they find him left for dead but are then confronted by a group of bounty hunters ready to cash in on Vash.

So, if this were a brand-new anime with no ties to the legacy of Trigun, it would be just fine. But when stepping into the shoes of the original, it falls short in many ways. First off- the mystery. We see glimpses of Vash and Knives as kids, and the new design of Vash shows he clearly has a metal arm, which is a blown opportunity. Plus, with the introduction of Knives so early, it feels like the big mysteries of the original are already thrown to the wayside. Next- the music. I loved the soundtrack to the original series- I still have the CDs for it. The western-tinged melodies were the perfect fit for the series. With Trigun Stampede, we get more of a generic soundscape that doesn’t do the story justice.

The story is OK, they drive home the point that Vash is a pacifist, and the action sequences are done exceptionally well. I’m not too fond of the change of Meryl’s profession, and Vash doesn’t quite have the charm and likeability of the original. It will still be interesting to see where the story goes and what familiar faces show up, it just doesn’t quite have the essence of Trigun.

As I said, this first episode would be fine if this were a brand-new series. But as a successor to Trigun, it doesn’t quite reach the charm and vibe we know from the original series. I still enjoyed it and will be watching the second episode, but the bar has been lowered, in my opinion. Check it out today on Hulu!

Rating. 3.5 Pastrami Nations out of FIVE.