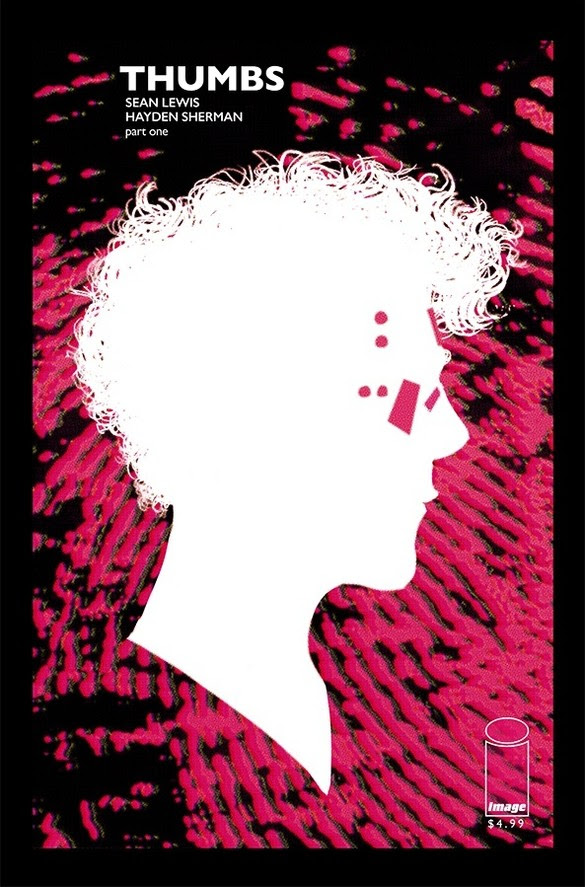 Award winning playwright and comics writer Sean Lewis (Coyotes, Saints, The Few) teams up with award winning artist Hayden Sherman (The Few) for a new technology thriller series in Thumbs. The rapid-paced, science-fiction maxi-series will be five issues—each issue a total of 40 pages—and will launch from Image Comics this June.

Imagine someone like, say, Mark Zuckerberg created his own army of tech-obsessed teens and directed them to take on the government. What would the fall-out be? Thumbs explores a high-stakes world where that—and much worse—can unfold. Charley “Thumbs” Fellows is a member of just such an army. Poor and raised by the influential MOM™ app, he finds himself in the center of a war.

“I was watching a kid play with his phone and how anxious he was waiting for a message back from a friend and it made me think about how anxious all the people I know are,” said Lewis. “I started thinking about the internet and our obsession and reliance on it and the realities of who controls the flow and embedding of information. Was our anxiety planted? Has tech become such an obsession for us that we’d go to war to keep it? Just watching that kid and all the emotions that three dots on a screen were creating made me wonder—do we actually control the tech, even at its smallest levels?”

Best described as The Social Network meets Black Mirror, Thumbs is a must-read book from the team behind the hit series The Few and is perfect for readers of Christopher Sebela, Ro Stein, and Ted Brandt’s Crowded.

Sherman added: “Thumbs is as much a story about technology as it is about loss, time, and learning your place in the world. With the great range of themes and locales that play into these five issues, I’ve taken the chance to expand and really push myself with how a story can be told. The hope is for it to be between storybook and comic book, where it could be either at any given moment.”

Thumbs #1 (Diamond Code APR190011) will be available on Wednesday, June 5. The final order cutoff deadline for comics retailers is Monday, May 13.

Thumbs #1 will also be available for purchase across many digital platforms, including the official Image Comics iOS app, Amazon Kindle, Apple Books, comiXology, and Google Play.