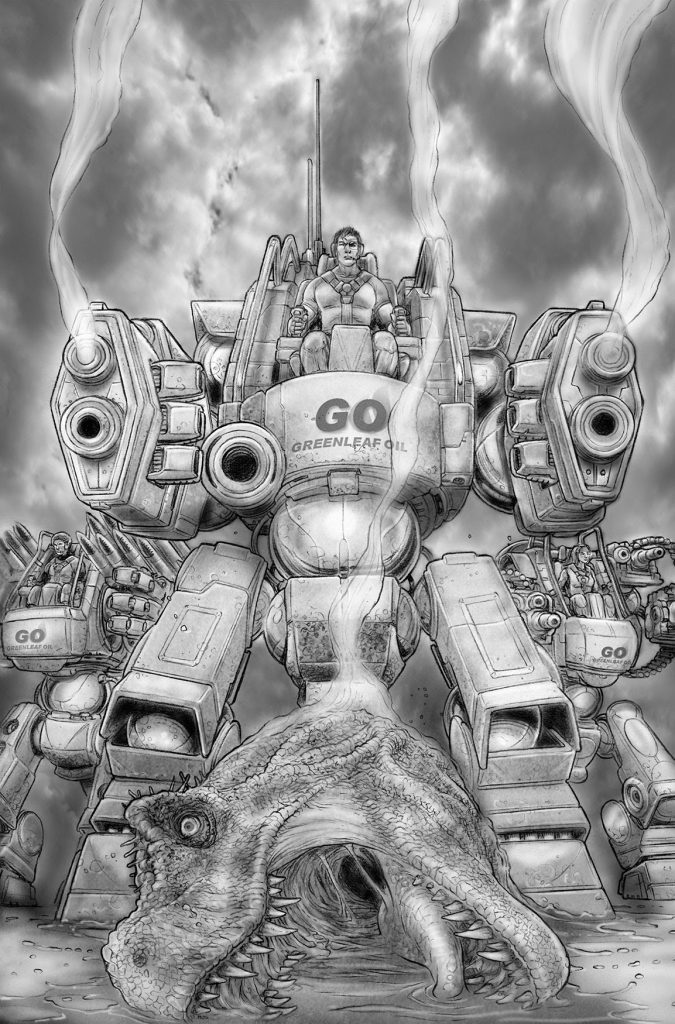 After a billion clicks, a bombshell secret comic that’s turned the internet on its ear, a lot of laughs, and, hey, even a few tears, Bad Idea – the dangerously unruly and equally experimental new comic book publisher – is ready to do the impossible: Actually publish comics. We always knew it would come to this.

But before we tell you more about what those books are, here’s a quick refresher on what Bad Idea does best: Comic books, sold exclusively in participating comic book stores. No digital releases. No trade paperbacks or hardcovers. And no variant covers, either. Just super-high quality comics that will always leave you wanting more – because we’ll never publish more than two in a given month.

When it comes to our books, Bad Idea has one pretty straightforward goal: Every single issue we produce has to look and feel special and earn its place on the shelf. Not only will every Bad Idea release feature audaciously entertaining comics storytelling in a crisply designed, prestige-format package with deluxe matte laminate covers and heavy-duty interior paper stock, but we’ll also be splurging on some enormously extra-long page counts, guest appearances by some of your favorite artists, and even standalone bonus stories in EVERY issue we publish for no extra-added cost. That’s where the next chapter of THE HERO TRADE – our insane series of shorts by creators Matt Kindt and David Lapham – will appear, as well as the birth of Bad Idea’s own subversive twist on what a shared universe can be and do. (Shh, we’ve said too much already.)

Here’s the kicker: If you want to pick up one or all of them (and we know you do), you’ll have to visit a Bad Idea “destination store” – one of the 100 and counting comic shops around the world that have signed on to join our independent network of direct-distribution retail partners – and buy them on a Wednesday (or simply pre-order them in advance by phone or email and pick them up whenever you’re damn well ready). We’ll be revealing more stores in the weeks and months to come and progressively adding even more on a rolling basis too, so if you’re a retailer and would like to get some of what Bad Idea’s got, just email us at [email protected].

Now that we’re up to speed, here’s what you came for: the comics. We’re calling this little publishing soiree our stable of BAD IDEA BEGINS titles, but let’s see if that sticks:

ENIAC #1 (of 4)
** MATT KINDT (writer) **
** DOUG BRAITHWAITE (art) **
** DIEGO RODRIGUEZ (colors) **
** LEWIS LAROSA with LAURA MARTIN (covers) **
Seventy-seven years ago, the United States unlocked the key to defeating the Axis powers, but, in their desperation to end the war, created a far more powerful threat: ENIAC (Electronic Numerator Integrator and Computer), the world’s first supercomputer. ENIAC’s calculations proved vital to turning the tide against Germany and Japan – until it ordered the second atomic bomb to be dropped on Nagasaki without any human order or approval. America had inadvertently created the first artificial intelligence without ever realizing the full extent of its abilities…or its ambitions. For the more than 50 years that followed, ENIAC manipulated global affairs from the shadows, waging a cold war that pitted spy against spy, nation against nation…until it went dark and disappeared from view. Now, years later, an encrypted countdown has just been detected in Earth’s satellite network and mankind only has three days left before ENIAC executes its endgame. With few options and even less time, the Secretary of Defense has just given two covert operatives the most important mission in human history: kill ENIAC…before it kills us.

TANKERS #1 (of 3)
** ROBERT VENDITTI (writer) **
**JUAN JOSE RYP (art/covers) **
**JORDIE BELLAIRE (colors) **
The CEO of global energy conglomerate Greenleaf Oil has just discovered a terrifying secret: the planet only has a decade or less of petroleum left before it’s gone forever. But he has a plan to make sure his great-great-grandchildren can continue to generate maximum shareholder value – and secure his own legacy in the process. Rather than develop a game-changing renewable energy source through the power of corporate innovation, Greenleaf has perfected the next best thing – time travel (duh) – so that a team of six field-rat contractors armed to the teeth in individually customized mech suits can go back to the Cretaceous Period, tweak the trajectory of the meteor that killed the dinosaurs, and give mankind another 500 millennia worth of oil reserves. What could go wrong? Only all of human history, of course – because when Greenleaf’s team of Tankers come home, they’ll discover that not only did the dinosaurs never die out, they’ve kept evolving for another 60 million years…and they’re more pissed off than ever.

When young Wawae – the seaborn son of a whaling captain – is thrown overboard and swallowed whole by a whale, he knows his father will relentlessly pursue revenge against the creature that stole away his boy. What he didn’t expect, however, is what he’s about to find inside: the town of “Whalesville” – a colorful, cobbled-together village inhabited by an astounding collection of talking sea creatures, including a crab named Caleb, an angler fish called Angela, and a seadragon that prefers to go by Lilly. But, to Wawae’s new friends, Whalesville isn’t just their home, it’s the whole world – and they don’t understand the danger that now pursues them from above the waves or that they are even inside a whale at all. To rescue his new best buddies, Wawae will have to convince them of the truth…and save Whalesville before his own father sends them sinking into the inky depths forever.
** WHALE-SIZED ONE-SHOT // ON SALE MAY 2021 **

THE LOT #1 (of 4)
**MARGUERITE BENNETT (writer) **
** RENATO GUEDES (artist/cover) **
In 1970, legendary filmmaker Oliver Larsen began production on his latest horror masterpiece on the lot of Los Angeles’ famed Cloverleaf Studios. Obsessed with bringing authenticity to the genre, the director insisted on casting real-life occultists to perform a genuine Satanic ritual live on camera – until something went horribly wrong. In the bloody aftermath, the production was shut down, the footage was confiscated, and the soundstage was forever shuttered.

On the heels of a promotion that’s just made her the youngest studio chief in decades, Aviva Copeland is planning to overhaul Cloverleaf’s fading image for the 21st century – starting with the prime piece of California real estate that’s gone unused for 50 years: the very same lost soundstage where Larsen filmed his doomed masterpiece. But, as Aviva will soon discover, this corner of the lot may have been closed for a half-century, but it’s far from empty…and the evil that lives within its haunted walls will soon seize its chance to kill again.