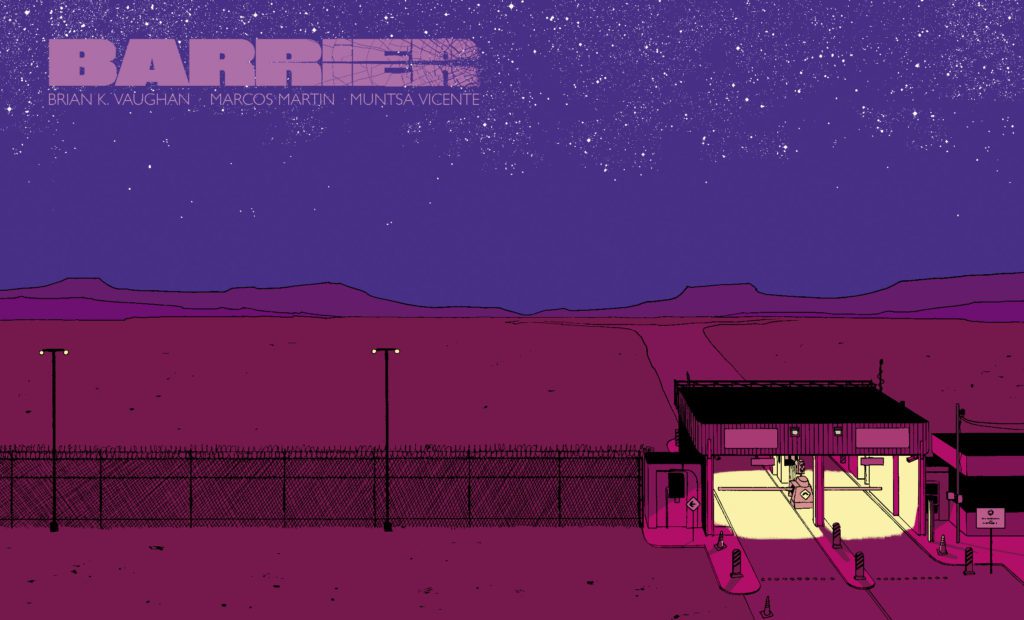 It is through a beheaded horse’s trachea that Barrier #1 begins, a book by Brian K. Vaughn, Marcos Martin, and Munsta Vicente. Originally offered as a digital-only book via Panel Syndicate, the first issue is now available through Image Comics.

Given the serious climate of recent days (that kind of “World War” serious), this is fitting. It is during times like these that symbols of freedom do not ring honestly, they sound with a suspicion as stability may be pulled from beneath the foot of the comfortable American. This Western side of the world, the one that used to lure the universe to its frontiers of opportunity and endless possibilities, has finally filled up.

It is through a beheaded horse’s trachea that Barrier #1 begins.

Beginning in the discomfort of the early hour twilight that bad mornings brew overnight in, we find ourselves in the Mexico-bordering city of Pharr, Texas. This is where we are introduced to Liddy, a hardened cowgirl that from the looks of her eyes, she’s going through something. This horse head is her horse’s head and belongs to her ranch (which we hear while she is talking to her border patrol pal, is the last thing she has of her late husband). This issue of Barriers for Liddy follows her investigative process, how she tries to find help to protect her ranch and hints at her past.

On the other side of the border, we find ourselves witnessing a coyote operation as its cartel gives its soon-to-be smuggled group the rundown of how they will be seen by border patrol — as dogs. It is here, in an old auto shop garage in San Pedro Sula, Honduras, that we meet Oscar. He is about to board a truck with an agriculture-front (looks like it’s shipping bananas, not people) with some other sweet souls trying to find a better way to live. As first impressions go, he seems kind-hearted and protective of how he thinks things should be. His first words are “Leave her alone,” as one of the cartel’s men pulls a gun on a transgender after she knees him in the groin for choking her. For Oscar, this issue chronicles his tough, northbound journey as he is being hunted like a dog.

Ultimately, the theme of this issue is the fight for a better future. Not quite completely sure about it yet, but Liddy seems to be angled on redemption and trying to rise above her current low. Oscar is fighting to live an ambitious life, and I think that book he almost died nearly missing his train for may be his golden ticket. Whatever it may be for Oscar, his motivation brings him to the point where his mission is either life or death.

A stream of duality flowed through the storyline, which I believe was to create a contrast between Liddy and Oscar. “Liddy is an American cowgirl, Oscar is an immigrant from Honduras, Liddy has people to ask help from (though not too helpful), Oscar has no one…” Even though they have different obstacles, they are evenly weighted in the way that we all have our different paths and battles. I think this was even illustrated wonderfully beginning on page after Liddy leaves Kates gross, confederate flag-displaying acquaintance, Greer. There is a visual poetry as the pages show the symmetry of Liddy and Oscar’s paths juxtaposed with a center panel of the sky, changing with sunrise and sunset. While reading this issue, I could not stop enjoying the scenery as well as the pace of the story that the sky provided. As their paths came closer, the panel of sky between Liddy and Oscar narrowed, quickening the pace until they finally are in proximity to each other, removing the barrier of distance between them. Much praise to the team of Barrier for illustrating how arbitrary yet connected we all really are.

The horse’s head is the catalyst that narrows the paths of our story’s characters together.

There is a mystery at the end of this issue, and I look forward to the next book.