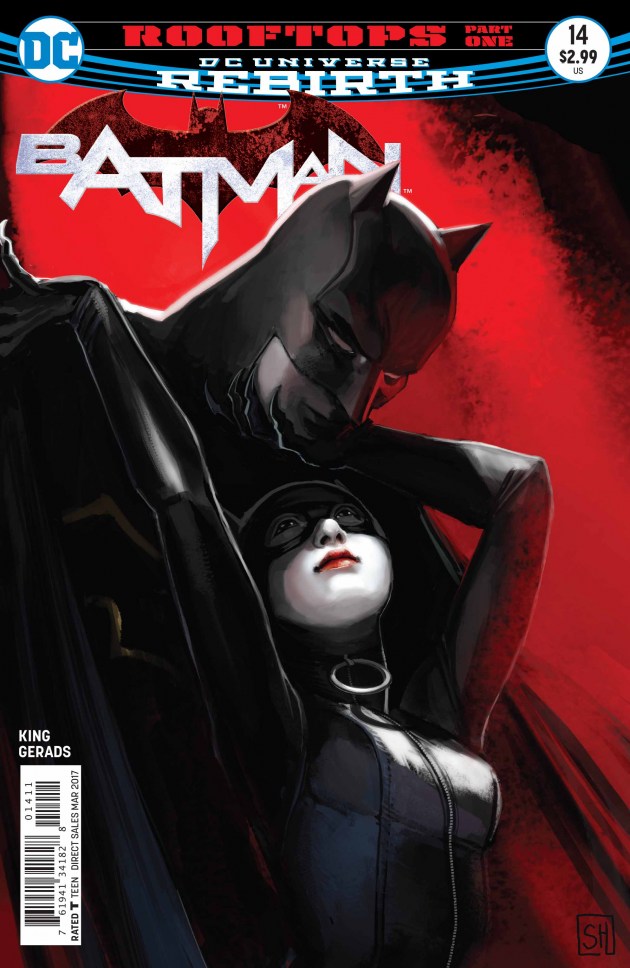 A New Side to the Catwoman/Batman Relationship

The entangled relationship between Batman and Catwoman has been going on for years and years. The love/hate relationship has been something fans have loved seeing, as one stands for the ultimate good in the world, and one doesn’t just walk the fine line, she dances on it. With Batman #14, the start of the new storyline “Rooftops”, we get another chapter in their story, with two pretty big twists.

Written by Tom King with art by Mitch Gerads, this issue takes place pretty much completely on rooftops. It looks like Catwoman’s crimes have finally caught up with her, and she is going to be locked away for the rest of her life. When Batman confronts her, Catwoman doesn’t try to fight the charges (we don’t even know if they are legit or not), but instead asks for one night, then she will give the rest of her life. That night is composed of beating down C and D level villains with Batman, pulling a heist for something in her own home, and with breaking character and seemingly doing something great for the future, something bound to hit Bruce hard. But, we also see what fans have been wondering about as Batman and Catwoman spend the night on the rooftop.

This issue adds a new dimension to the Catwoman mythos, and does such a great job humanizing the popular villain, showing that she does indeed have a heart for more than just herself. A very well planned out, well plotted issue that pretty much guarantees anyone that reads this issue has to come back for the next. I mean, how could you not? To see what happens to Catwoman, to see what happens between the two next? This issue is a must read for anyone who has had a vested interest in the Bats/Cat chemistry.