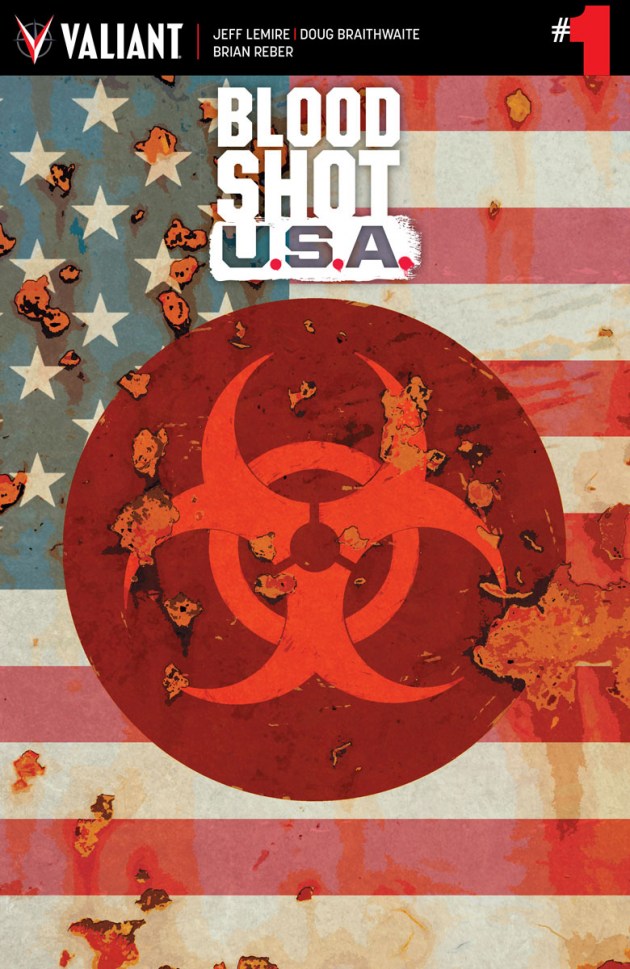 Bloodshot is easily one of the most popular characters in the Valiant Universe. The nanite infused former assassin turned anti-hero, the pale skinned warrior has been through a lot in his life, and it doesn’t look like life is going to get any easier with Bloodshot U.S.A. From writer extraordinaire Jeff Lemire and artwork by the always impressive Doug Braithwaite, this first issue shows us why the killing machine might not be as different from you or I as we imagined.

Project Rising Sun, the organization behind not only the creation of Bloodshot, but the seemingly other Bloodshots prior to our current “hero”, has gone too far. With the release of a pathogen, a Bloodshot virus, the organization looks to create an epidemic that sends the world into panic, only to allow Project Rising Sun to be the “heroes” at the end of the day, stopping the disaster they created and control. Meanwhile, the group of Bloodshots, who were marooned on an island, have been rescued by another popular anti-hero: Ninjak. But when it is revealed that anyone who has visited New York in the last few months is already infected, we see two major players turn into blood thirsty soldiers of death- how can the Bloodshots stop an army of replicas of themselves?

I will be honest, I haven’t been reading the Bloodshot series as of late, so I was a little thrown off on who the group of Bloodshots are, but the story within this book is pretty well contained. How can Bloodshot and whatever allies he may have left stop a city infested with Bloodshot soldiers? This is the story, especially since Bloodshot is used to solving problems by putting a bullet into his opposition. Lemire and Braithwaite have created a good start to what is sure to be a bloody good series, if the last page is any indication. Bloodshot U.S.A. is here, who survives this new nation remains to be seen.