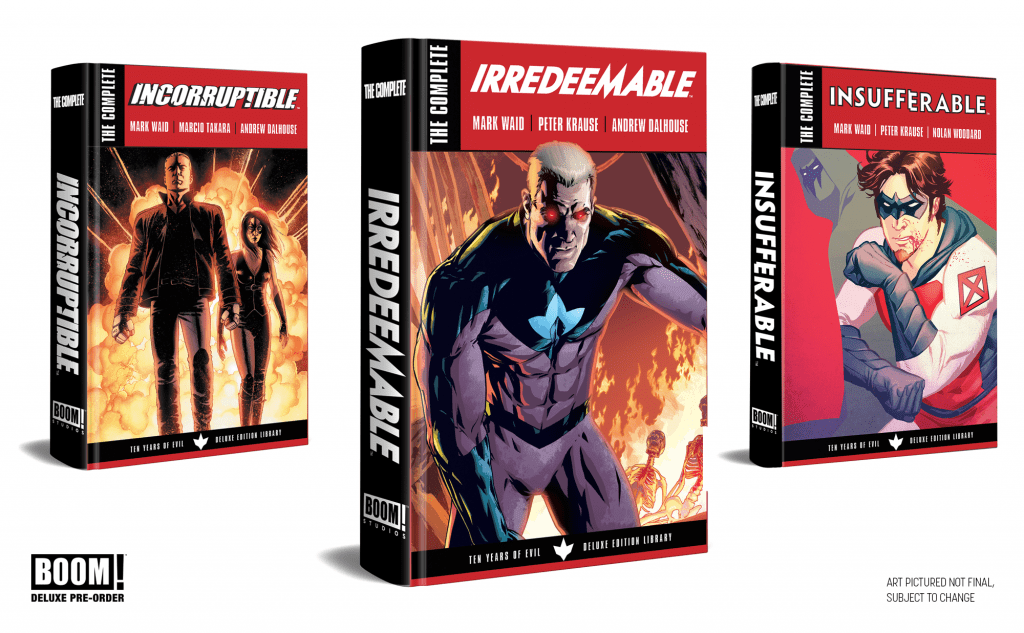 Now, BOOM! Studios is proud to bring the three interlocking narratives of the IRREDEEMABLE mythos – the original IRREDEEMABLE run, plus its hit companion series, INCORRUPTIBLE, and the spiritual successor co-created by Waid and Krause, INSUFFERABLE – together for the first time in THE COMPLETE IRREDEEMABLE DELUXE EDITION LIBRARY.

Over the course of the pre-order campaign, BOOM! Studios will be unveiling even more surprises with Stretch Goals that include brand-new covers for all three hardcover volumes by original series cover artist and Eisner Award winner John Cassaday (Astonishing X-Men) and the promise of  “a major announcement for the future of the IRREDEEMABLE franchise” with more to be revealed over the next 30 days.

An immediate critical sensation upon its debut, IRREDEEMABLE earned multiple Eisner and Harvey awards and nominations for its founding creative team of Mark Waid and Peter Krause. In the years since, the IRREDEEMABLE saga’s influence and renown has only continued to resonate further, finding legions of new fans and leading to the eagerly awaited news that Netflix is currently developing both IRREDEEMABLE and INCORRUPTIBLE as the foundation of a new feature film franchise from BAFTA Award-winning director Jeymes Samuel (The Harder They Fall), Academy Award-nominated screenwriter Kemp Powers (Soul), and producers Jay-Z and James Lassiter.

Now, with even more big IRREDEEMABLE news looming just over the horizon, BOOM! is excited to offer longtime fans and new readers alike a limited-time opportunity to pre-order the ultimate edition of the series that forever erased the shades of gray that once separated hero from villain – with a variety of limited-edition upgrades and extras, featuring brand-new contributions from some of the comic medium’s most beloved creators, including Cassaday, Howard Chaykin (American Flagg), Barry Kitson (JLA: Year One), and Waid and Krause themselves.

Collecting every single issue of IRREDEEMABLE, INCORRUPTIBLE, and INSUFFERABLE into complete, standalone volumes, THE COMPLETE IRREDEEMABLE DELUXE EDITION LIBRARY is the only place to get the three hardcover behemoths that comprise the totality this brutal superhero epic. Each volume is a full color, 6.625″ x 10.1875″ hardcover, available first on Kickstarter and running anywhere from 400 pages for INSUFFERABLE to a massive 1000+ pages for IRREDEEMABLE.

Limited to 100 pieces with signed and hand-numbered silver bookplates (signed by writer Mark Waid), packaged in a signature, silver collectible box with hinged magnetic lid and featuring a bevy of extras, including an original sketch from artist Peter Krause, limited-edition prints reproducing the cover art of John Cassaday, exclusive merchandise, and more.

Limited to 50 pieces with signed and hand-numbered gold bookplates (signed by writer Mark Waid), packaged in a signature, gold collectible box with hinged magnetic lid. Plus: A bevy of extras, including original sketches from artists Peter Krause and Barry Kitson; limited-edition prints reproducing the cover art of John Cassaday; exclusive merchandise; and all of the Special Edition Variants – including CGC 9.8 editions of each Gold Foil variant!

Limited to just 25 pieces! Includes exclusive, clothbound hardcover editions of all three volumes featuring red foil-stamped covers and hand-numbered ELITE bookplates (signed by writer Mark Waid), packaged in a ELITE collectors’ box with hinged magnetic lid. Plus: A bevy of extras, including an original sketch from artist Peter Krause, alongside a second “blind box” sketch  for the first five backers by Howard Chaykin (with subsequent artists to be revealed as the campaign progresses!); limited-edition prints reproducing the cover art of John Cassaday; exclusive merchandise; and three CGC 9.8 Signature Series variant covers featuring exclusive ELITE red foil that will never be available anywhere else.

Plus:  All backers at the ELITE tier will become inaugural inductees into the first class of BOOM! ELITE membership holders. In tandem with a 12-month BOOM! ELITE membership available only at the highest tier, backers will receive an exclusive metal ID card and carrying case, which can be used to redeem 20% off all BOOM! webstore inventory and convention items with no annual limit and multiple other perks – including access to exclusive, ELITE-only variant covers, special signing opportunities, and access to an exclusive online Q&A with Mark Waid and special guests. It’s a small club…because there can never be more than 100 BOOM! ELITE members at any one time!

For longtime fans, now’s the time to relive the metropolis-smashing comic book epic that reshaped a generation of superhero storytelling.

For new readers, there’s never been a better way to experience the ultimate hero’s fall from grace…if you can handle the ride.

Welcome to the world of IRREDEEMABLE.

For continuing news on IRREDEEMABLE and more from BOOM! Studios, stay tuned to boom-studios.com and follow @boomstudios on Twitter.