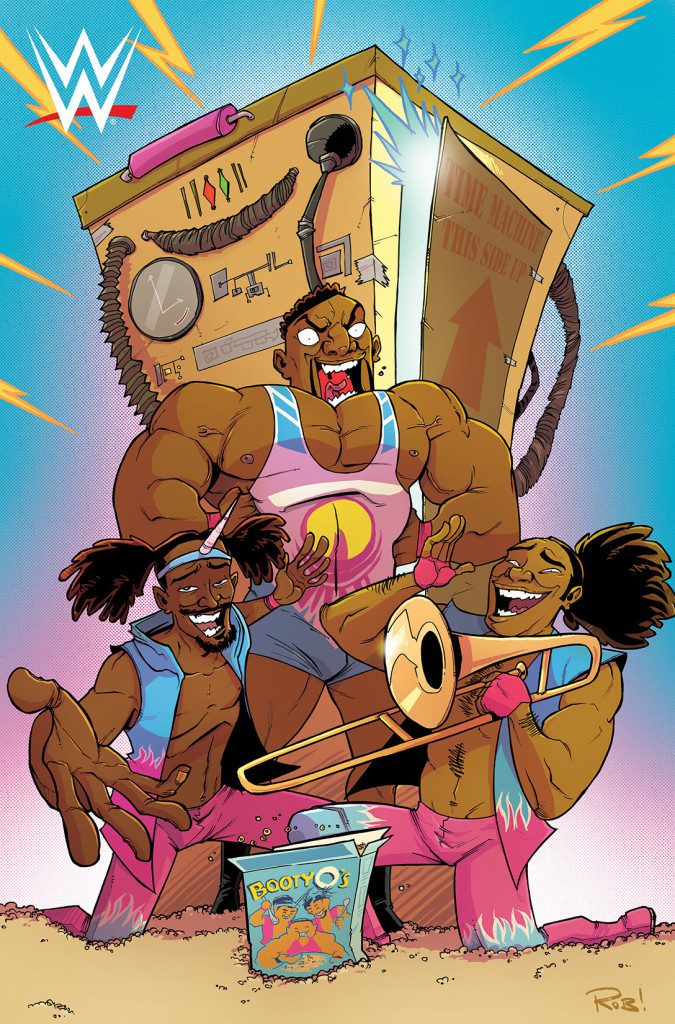 First Announcement by Boom! Studios Brings the WWE to the Comic Book World

Our first announcement in the #RoadToSanDiego is out! We have partnered with WWE for new comics!

We will launch the initiative at Comic-Con with a set of six, blind-bagged, one-page comics ($5 each, for sale at the BOOM! Studios booth #2229) titled WWE: Then. Now. Forever. Each comic will feature a pin-up image on one side of a different wrestler and a one-page info-comic on the other side that explores that wrestler’s background and history in the ring. Three of these comics will focus on current wrestlers (Now), two on retired favorites (Then), and one on a legendary WWE talent (Forever). A seventh one-page comic will be given out FREE to all attendees of our panel on the WWE comics (see below). Each info-comic is illustrated by Russ Manning Award nominee Daniel Bayliss (Kennel Block Blues, Translucid), colored by Doug Garbark, and lettered by Jim Campbell.

Here are the 10 panels at Comic-Con that Boom! Studios will be participating in:

12:00-1:00 Getting into Comics and Staying There—“Breaking into Comics” panels are among the most popular panels at comic conventions throughout the country. Aspiring writers and artists are as in-demand with publishers as social media wizards and Excel-loving number crunchers. Listen to the origin stories of Jim Zub (Wayward, Thunderbolts), Felipe Smith (Mighty Morphin Power Rangers, All-New Ghost Rider), Caitlin Kittredge (Lucas Stand, Coffin Hill), Dan Mora (Klaus, Hexed), and Kyle Higgins (Mighty Morphin Power Rangers, C.O.W.L.), and the behind-the-scenes professionals they work with to make the comics you love to read! Moderated by BOOM! Studios Editor-in-Chief Matt Gagnon and Editor Dafna Pleban. Room: 28DE

1:00-2:00 From Concepts to Comics: A Conversation about Editing in the Comics Industry—BOOM! Studios Managing Editor Bryce Carlson and Editor Eric Harburn lead a discussion on the roles editors can play in the comics industry with James Tynion IV (Detective Comics, The Backstagers), Mairghread Scott (Toil and Trouble, Transformers: Windblade), Hope Larson (Goldie Vance, Compass South), Simon Spurrier (Weavers, Cry Havoc), Pat McHale (Over the Garden Wall), and Adam Smith (Long Walk to Valhalla) as they explore the differences between working with and without an editor, at an indie publisher or the Big Two, and how editors can partner with talent to put creators’ vision to paper. Room: 28DE

10:00-11:00 Queer Representation in All-Ages and Youth Media—Many people have often dismissed queer content as adult content inappropriate for kids. However, as we’ve seen in the popularity and successes of Legend of Korra, Steven Universe, and Lumberjanes, LGBTQIA+ characters and storylines resonate with young audiences. Join moderator Dylan Edwards (Valley of the Silk Sky) as Dylan leads as a discussion with Shannon Watters (Lumberjanes), James Tynion IV (Detective Comics, The Backstagers), Paige Braddock (Stinky Cecil, Peanuts, Jane’s World), Magdalene Visaggio (Kim & Kim), and Josh Trujillo (Adventure Time, Love Machines) about how we can better include healthy representation and how to make it standard practice. Room: 4

5:00-6:00 The World of Mouse Guard—David Petersen’s fan-favorite Mouse Guard series has been around for more than a decade, and publisher Archaia, an imprint of BOOM! Studios, is proud to be a part of its legacy! But what’s next? Join Petersen and BOOM! Assistant Editor Cameron Chittock in a behind-the-scenes look at the award-winning comics and games, including the recently released Mouse Guard: Art of Bricks, a peek at the forthcoming Mouse Guard Coloring Book, and more! Plus, comedian Hal Lublin (The Thrilling Adventure Hour) will be on hand for a live reading performance of a Mouse Guard short story! Room: 32AB

5:30-6:30 BOOM! Studios’ Publishing Partnership with WWE—BOOM! Studios is proud to announce its publishing partnership with WWE to bring the Sports Entertainment leader back to comic shops everywhere. Come join BOOM! Studios President of Publishing & Marketing Filip Sablik along with Managing Editor Bryce Carlson, Editor Eric Harburn, and artist Dan Mora for an inaugural power hour of special announcements and the debut of exclusive artwork, including the exclusive announcement of who will be writing the upcoming WWE: Then. Now. Forever. comic coming in November. Plus, every attendee will receive an exclusive, double-sided, one-page comic for free! Room: 7AB

10:00-11:00 Camp Out with Lumberjanes!—Pack your bags, bring your s’mores kit, and get your badges ready! Join the brilliant minds and collaborators behind the breakout hit Lumberjanes, published by the BOOM! Studios imprint BOOM! Box. Lumberjanes Shannon Watters, Kat Leyh, and Chynna Clugston Flores, along with Editor Dafna Pleban, discuss the book’s runaway success; what’s in the pipeline for Mal, Molly, April, Jo, and Ripley; their current crossover with DC’s Gotham Academy; and the importance of hardcore lady types. Moderated by BOOM! Studios Associate Editor Whitney Leopard. Room: 25ABC

1:00-2:00 YA, Why Not? The Importance of Teen and Young Adult Comics—Once the fastest growing genre in literature, YA books have grown beyond babysitting and first loves. Now that graphic novels are making award-winning shortlists, comics aimed at middle-grade and young adult readers are growing in popularity. Join BOOM! Studios Senior Editor Sierra Hahn and creators Hope Larson (Goldie Vance, Compass South), Raina Telgemeier (Smile, Drama), Cecil Castellucci (Shade, The Changing Girl, Moving Target: Princess Leia), and Brenden Fletcher (Gotham Academy), in a discussion about the significance of these emerging categories of comics and what they mean for modern literacy. Room: 24ABC 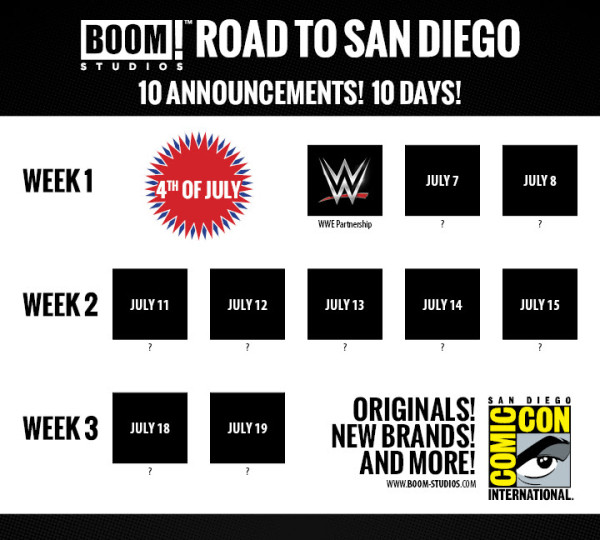