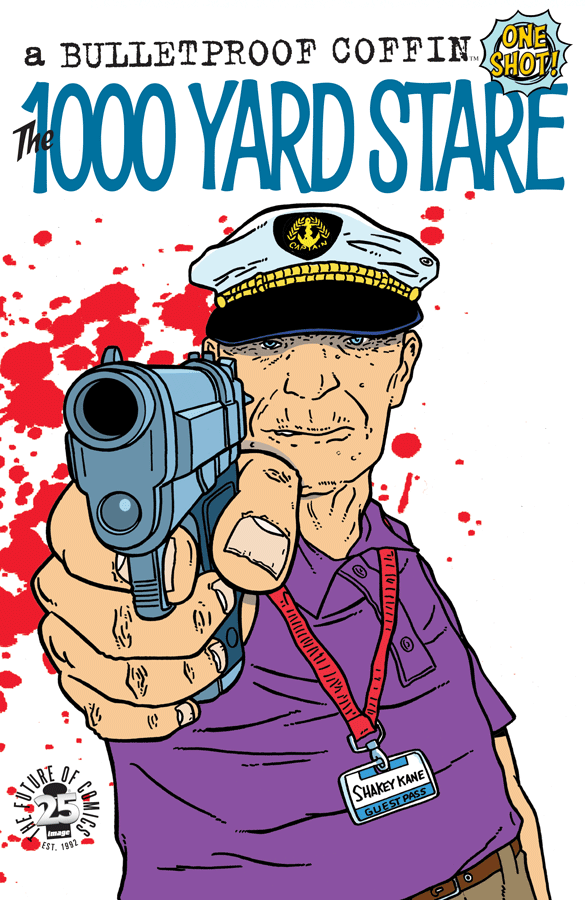 The Bulletproof Coffin One-Shot is brutal and brutally honest

Years ago artist Shaky Kane and his writing partner, David Hine, gave in and sold out by selling their comic creation to a huge publisher. They made a lot of money, were living the dream, but quickly went broke. Over the years, their friendship ended and they went their separate ways. With Hine out of the picture, Shaky is given a second chance that brings him back into the comic book business, but not without some consequences.

‘The 1000 Yard Stare’ is a strange meta exploration of comic books and the fandom that comes with it. The main story is about Kane’s struggles with being an artist and trying to remain relevant. Another is one that takes you into his newest comic creation, “Hypno Vampires from the Stars”. It’s a comic within a comic, a homage to the science fiction comic books of the 50’s and 60’s. In the end, the two stories come together and create a narrative that is both fun and somewhat horrifying.

Without knowing anything about the ‘Bulletproof Coffin’ series, I can say this book is in a league of its own. This story is about comic creators and its fans. It’s also about consumerism, entitlement, paranoia and getting too close to your creations. Reading the book, the amount of pure love that the real Hine and Kane (writer and artist, respectfully) have for comics is made perfectly clear. It is also clear the amount of frustration and distain they have for the craft as well. It’s a uniquely honest book, with an entertaining narrative at its core.