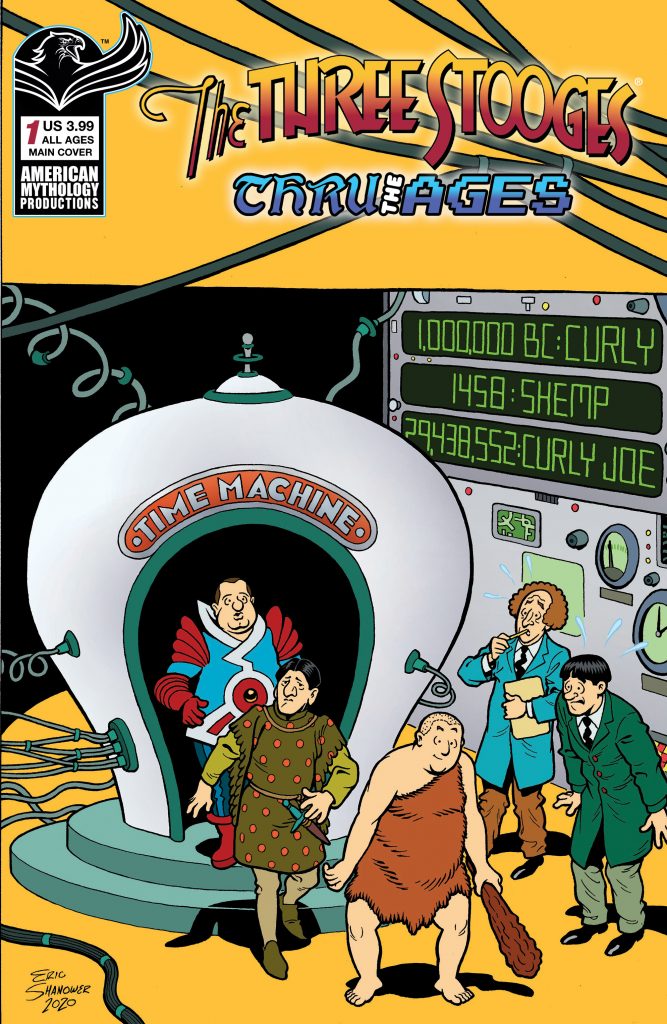 Looking to get in touch with your inner-wiseguy? Trying to put the wit back in your half-wit? Ignite you ignoramus? Well then, American Mythology has just the comic for you! To kick off the book publisher’s five-year anniversary, the company is releasing The Three Stooges, “Thru the Ages”. The book is filled with new Stooge content from front cover to back to help celebrate five years of producing new Three Stooges funny books. It’s a Stoogetacular celebration!

The Three Stooges are a legendary comic team who have been making the world laugh since their first days in Vaudeville nearly 100 years ago. And while the comic book publisher has big things planned to help celebrate the group’s upcoming comedy centennial next year, they couldn’t pass up on the chance to toot their own publishing horn celebrating the five-year publishing mark with one of their flagship titles!

To help make the book extra-special, AM decided to add three brand new never before seen Stooge stories to the issue. Each tale helps to celebrate a specific period in The Boys’ careers. In “For Doody & Humanity” by Stooge-veteran writer, S.A. Check (Three Stooges, Laurel & Hardy), fans will see the original lineup of Moe, Larry, and Shemp as they try to protect a rare bird egg from gorilla garbed poachers! “Rubes in the Ring” by writer Todd Clark (Underdog & Pals, Rocky & Bullwinkle) brings Moe, Larry, and Curly together to deliver a knockout punch, and, finally, “Stooges on Set” by writer Jordan Gershowitz (Tom & Jerry, The Twisted Timeline of Sammy & Raj) teams Moe and Larry up with Curly Joe for a wild ride through a working movie studio! Interior art for the stories were drawn by fan favorite artists, Jorge Pacheco, Diego Tapie, and Brendon and Brian Fraim. Cover art was drawn by award winning artist, Eric Shanower.

But wait!  There’s more!  If that’s not enough to wet your Stooge whistle, how about an exclusive interview with not one, not two, but three Stooge family relatives, who all help to keep the comedy flame of the Stooges burning bright.  The great-grandsons of none other than Larry Fine himself, Kurt and Don Lamond, and Curly Howard’s grandson, Brad “Curly G” Server!  The interview focuses on the three’s unique memories of their famous relatives and gives some insightful and, often times, touching recount of what The Boys were like when not in front of the camera.

“If we stuffed any more Stoogedness into this comic, it would explode,” said book writer, S.A. Check.  “AM came to us and said we want to celebrate our five-year anniversary with a Three Stooges book that truly encompasses what we’ve done with The Boys over the last few years.  I said, ‘Hold my porcupine! We’re on it!’  We threw everything we had at this issue.  We have Moe!  We have Larry!  WE HAVE SHEMP! Curly! Curly Joe!  You name it – it’s in there for an all-out Stooge-fest of epic proportions!  The three stories we ended up using for the book are just great fun snippets of different points in The Boy’s epic careers.  I think fans will really enjoy the little trip we take across the Stooge universe and each story brings something unique with the lineup of wonderful artists who contributed.  We also have an interview with some Stooge family members that revealed some things I think even die-hard fans didn’t know about The Boys!  And, as if that isn’t enough, we have a fun look back at all the comics AM has published to get us to this point!  This is a cover-to-cover blast, filled with all things Stooges!  Don’t miss out on it!”

The Three Stooges “Thru the Ages” is slated for release on February 10, 2021, and will be available at participating comic book retailers everywhere.  No shops near you?  Go over to www.AmericanMytghology.net/shop and order direct from the publisher’s website.