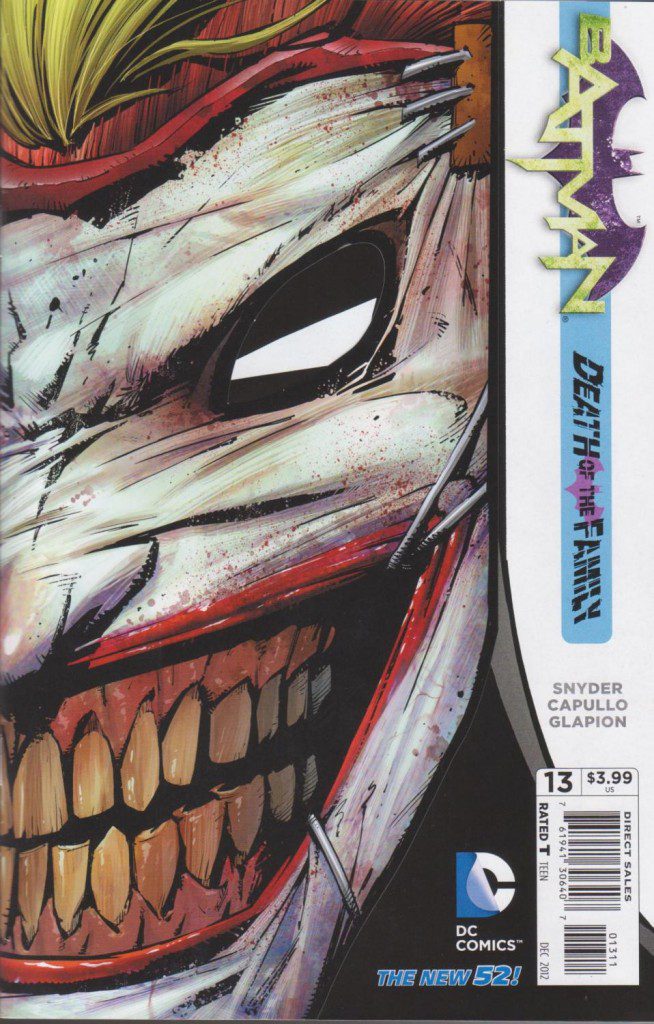 The New 52 hasn’t been a really big hit with me, I want to be honest with that right at the beginning. I was picking up Justice League, Aquaman, Batman, Green Lantern, and so on at the beginning. Soon, that changed to only picking up Batman and Animal Man, and eventually I ended up dropping all my DC titles. Yet, I kept hearing about how good the Batman books were, especially from my good friend David (R.I.P Dave). He would tell me about the Court of Owls, and how Snyder and Capullo were knocking it out of the park every single time. So I gave the recent Issue #0 a try, and it was great. That made me want to pick up Batman #13, the start to the Death of the Family storyline. But would a person who hasn’t read a Bat book all year be able to pick up the book and enjoy it?

That answer is a loud YES! Batman #13 is a perfect example of what a Batman book should be: creepy, scary and dark. By the look of the cover, you can see that it’s the return of the clown prince of crime himself, The Joker. But this is the Joker we have always wanted: the insane, horrifying demented man that balances out Bruce Wayne’s methodical mindset. But this Joker is worst than before, just one look at his mutilated face should be evidence enough. The way the Joker acts, speaks, and terrorizes embodies what the character should be.

Scott Snyder provides the script, and he continues to show why he is one of the best in the business. I read Snyder’s Gates of Gotham, as well as his Image Comics series Severed, so I know what the man is capable of, and he shows it here tenfold. Greg Capullo, the man (besides McFarlane) most associated with Image Comic’s Spawn, is showing why his art style is perfect for Batman. I came in not knowing much about what happened before this issue, but with the issue being such a great jumping on point it made no difference. A suspenseful romp through Gotham with a surprise ending, this book has me on board for a New 52 book once again, and that’s a huge accomplishment. Highly recommended, I give Batman #13 a perfect @@@@@ out of FIVE.