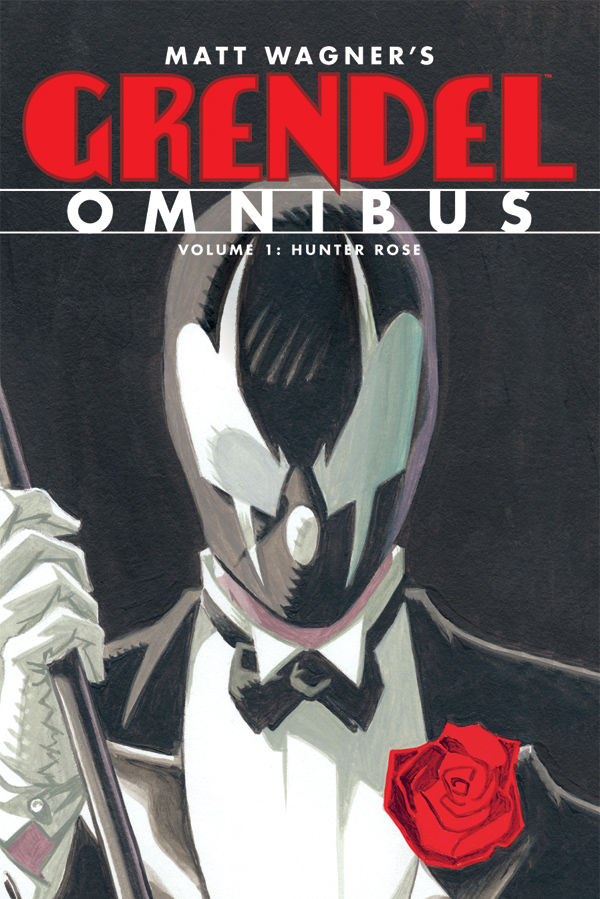 Thirty years ago, a single man shook the world of comics: a solitary man donned in black with a thirst for blood and a way with words. Matt Wagner’s Hunter Rose, the man behind the iconic Grendel mask, was a character no one was expecting, and that’s something that has stood the test of time. Now, in 2012, the epic works of Grendel are being collected in four omnibus editions starting with Volume 1: Hunter Rose.

Story: The story of Grendel and his legacy are somewhat a legend in the comic world now. But for those that are in the dark, let me help you in understanding the devil that is Grendel. Hunter Rose is a wealthy young man, barely reaching the age of 18 when the story begins. A visionary author whose appearances spark mayhem wherever he may go, Hunter holds a dark secret: he is the murder known as Grendel. A sadistic, violent masked murderer who kills for profit, or any other reason he sees fit.

This volume follows the exploits of the young man, his violent actions, and the soft spot he gains for a young orphan, Stacy. This young girl is the link to his heart, but also to his sworn enemy, the wolf like man, Argent. Matt Wagner’s original Grendel was far beyond its time, as it introduces characters with so many layers, so many secrets, that it was really a rarity at the time it was published. This omnibus follows Grendel from his prime days to a fateful showdown that changes everything. Though very mature in nature, this should be recommended reading for anyone wanting to learn about the world of sequential art.

Art: Matt Wagner, along with a host of artists, brings these bloody, emotional stories to life in ways that haven’t really been seen too often in the printed page. For me, its Wagner’s merging of graphic design elements and line artwork that creates something new and innovative. Artists today, like Marvel Comic’s Jonathan Hickman, use the presence of graphic design and merge it with artwork to create a look and feel that is all their own: a style that they all owe a tip of the hat to Wagner for as he trail blazed the style back in the 80’s.

Overall: I have followed the works of Wagner in regards to Grendel for some time now. Having purchased separate hardcovers throughout the years, this omnibus series is the perfect way for someone to experience the Grendel saga in chronological order. I can’t recommend this volume enough, as this 600-page monster of a book should be on every comic book fans bookshelf. Highly Recommended, I give the Grendel Omnibus: Volume 1 a perfect ***** out of FIVE.