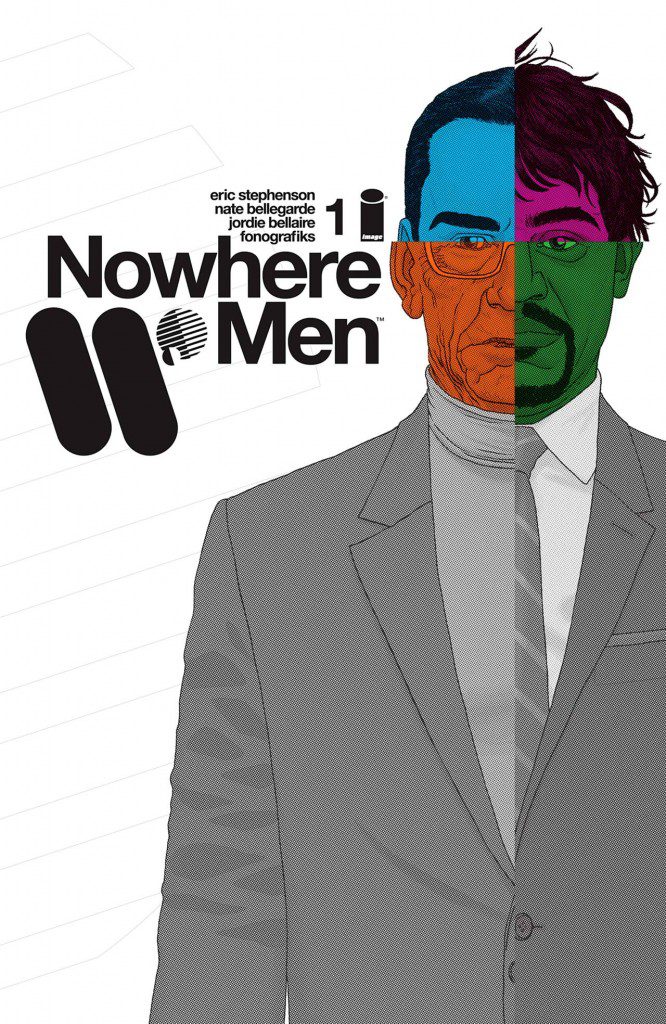 Science is all the rage right now, and why shouldn’t it be? Think of some of the most successful properties out right now, and let’s draw the scientific link, shall we? The Walking Dead is television’s smash hit and an amazing comic book: link to science being the zombie outbreak, how it started and how it works. Breaking Bad, the story of Chemistry teacher turned drug kingpin: the link to science is obvious. With the new Image Comics series, Nowhere Men, science takes the forefront once again, and does so in grand fashion.

Simon Grimshaw, Emerson Strange, Dade Ellis and Thomas Walker: they are the Beatles of the science community. Brilliant minds who all came together to create World Corp, where their ideas can take form and help shape the world. Of course, the ideas of a few geniuses aren’t always the safest, as we see right away in this debut issue from the massive rock/crystal guerrilla tearing through its handlers. World Corp and it’s idealists seem to have plans that span much farther than most would think, leaving the story wide open to just about anything to happen next. One of the coolest part of this book is right at the beginning, where we get magazine like bios on the four big brains of the book. Why is this cool? I always imagine that to create a character, you need to know this character all the way through. What’s his favorite color? Favorite movie? Trivial things like that are what helps create a lifelike character, one you can relate to, or at the very least feel more comfortable with. Eric Stephenson creates these living, breathing characters with ease, making the book stand out from anything else on the shelves when it comes to character development.

Nate Bellegarde provides the artwork for the series, and does a great job doing so. His style has hints of Mike Allred, which is not a bad thing at all. The book has a clean look, with characters leaping off the page at you in all their four-color glory. The book jumps from point A to B and C without notice, which could leave some wondering what the heck is going on. However, I think that by the time you reach the last page, you will be hooked enough to at least give issue #2 a try, if not more. A great first issue, Nowhere Men looks to be going places, and I, for one, will be there to see what happens in the name of science. Highly recommended, I give Nowhere Men #1 a solid @@@@ out of FIVE.