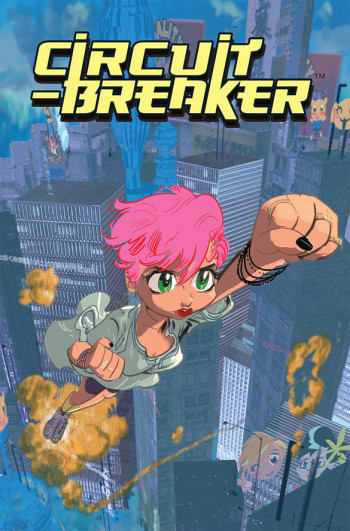 Circuit-Breaker is an Electric Read

CIRCUIT-BREAKER #1 is set in the aftermath of World War IV, where the heroic robots that saved Japan during war are outlawed. Now they’re turning against mankind, waging a campaign of terror across the last city on Earth.

“If Circuit-Breaker isn’t the best Shakespearean-Sentai, shōjo-shōnen superhero, soap-opera satire on the market, it’s at least in the alliteration. I mean, the conversation,” said McCarthy.

Meanwhile the vengeful robots’ original creator builds one more soldier—disguised as his teenaged granddaughter—and tasks her with dismantling the marauding mechanical militia. But as she begins to question her programming, will she be the last hope for humanity, or the final nail in our coffin?

McCarthy went on to describe the creative process of working with Baker. “The real hero here is my fellow Circuit-maker, Kyle Baker. There’s a lot going on in this book, and he took every one of my crazy ideas and obscure references and brought them to (artificial) life. I’m excited for everyone to see this book.”

McCarthy added: “Readers can expect our story to take a lot of left turns. So many in fact, that we made a complete… circuit? (Sorry.)”