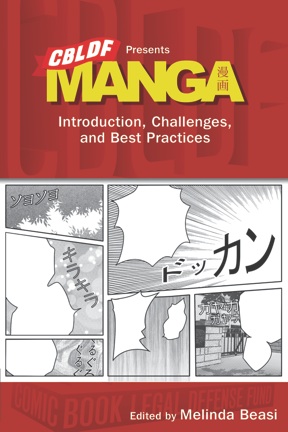 (New York, NY)—This summer, Dark Horse is proud to publish CBLDF Presents Manga: Introduction, Challenges, and Best Practices, an authoritative yet accessible handbook designed to help librarians, educators, and parents navigate the vast and popular field of manga. Prepared by the Comic Book Legal Defense Fund, a nonprofit organization dedicated to protecting the freedom to read, CBLDF Presents Manga provides what you really need to know about manga from those who really know it! The book will premiere at the ALA Annual Conference in Chicago, June 27–July 2, and at Anime Expo in Los Angeles, July 4–7.

Made possible with a grant from the Gaiman Foundation, CBLDF Presents Manga is a handbook designed to provide a concise and informed overview of manga—its history, genres, and issues. This educational work delves into the history of manga, its major demographic divisions, its most significant creators, and the challenges it has sometimes faced in North America.

What sets this book apart from other manga guides is its expert panel of writers, including not only scholars of the medium but veterans of the manga industry itself—professionals who have worked from both the North American and Japanese sides of manga in publishing, editing, review, and library services. Edited by Melinda Beasi of Manga Bookshelf, CBLDF Presents Manga is written by Manga Bookshelf columnist Sean Gaffney, Ed Chavez of Vertical, Erica Friedman of Yuricon and ALC Publishing, Shaenon Garrity of Viz Media and Otaku USA, and Robin Brenner and Katherine Dacey of School Library Journal.

CBLDF Presents Manga is an insider’s view on this dynamic and influential field and promises to be an essential resource for years to come!

About Comic Book Legal Defense Fund
Comic Book Legal Defense Fund is a non-profit organization dedicated to the protection of the First Amendment rights of the comics art form and its community of retailers, creators, publishers, librarians, and readers. CBLDF provides legal referrals, representation, advice, assistance, and education in furtherance of these goals. http://www.cbldf.org