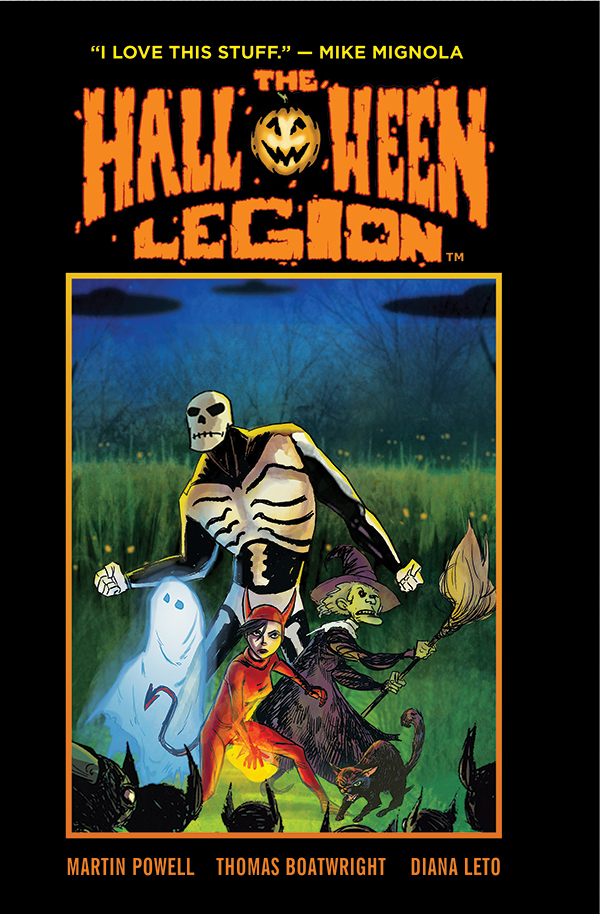 Check out the press release for The Halloween Legion, as well as the awesome cover above!

The sleepy rural town of Woodland is protected by a mysterious group of extraordinary guardians. They come from a place of eternal October, where orange, gold, and crimson leaves follow you in the autumn breeze.

THE HALLOWEEN LEGION characters, The Skeleton, The Witch, The Ghost, The Devil, and Autumn the Black Cat, are the creations of writer Martin Powell and illustrator Diana Leto, who share a passion for All Hallows Eve.

“I had the notion for THE HALLOWEEN LEGION, a team made up from Halloween archetypes, when I was still in high school, but it’s taken this long for me to know who they really are,” Powell explains.  “Diana has added considerably to their visual and personal charm.  She instinctively knows the World’s Weirdest Heroes as well as I do, and they are very real to us.  The art by Thomas Boatwright captures the HL’s whimsical nature without diluting the darkness lurking within our little group of weirdos.  At last, they are ready to be born into comics and graphic novels – and now every day will be Halloween!”

Also, included in the full-length graphic novel is Martin Powell’s autobiographical “Once Upon a Halloween”, illustrated by Diana Leto.  The eerie tale is, according to Powell, his very own origin story.

“This is such a wonderful project to work on,” adds co-creator, Diana Leto.  “The story really brings back some magical childhood memories of Halloween and the message that Martin’s ‘weird’ characters deliver is an important one for children and adults.”

Sequential Pulp Comics is a graphic novel imprint distributed by Dark Horse Comics, specializing in works of classic and new pulp literature.  Producer, Michael Hudson says, “Martin and Diana’s characters have depth and soul. I fell in love with them from day one.  The stories are pure pulp fun that will hook everyone.”

THE HALLOWEEN LEGION has already developed an enthusiastic fan base with no less than Mike Mignola cheering them on. “I love this stuff,” says the HELLBOY creator.