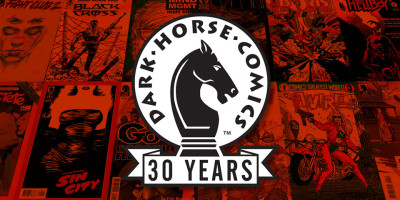 This year’s Dark Horse selections are as follows:

ApocalyptiGirl: An Aria for the End Times. By Andrew MacLean. Illustrated by the author. Dark Horse Originals, paper, $9.99 (9781616555665). Alone at the end of the world, Aria and a cat named Jelly Beans search for an ancient relic with immeasurable power.

EI8HT Volume 1: Outcast. By Rafael Albuquerque and Mike Johnson. Illustrated by Rafael Albuquerque. Dark Horse Books, paper, $17.99 (9781616556372). Joshua agrees to go on a mission through time to save his wife, but finds himself in a world outside of time.

Nanjing: The Burning City. By Ethan Young. Illustrated by the author. Dark Horse Originals, hardcover, $24.99 (9781616557522). This harrowing tale follows a Chinese captain and one of his soldiers as they try to escape the city of Nanjing in 1937, which has been overrun by the invading Japanese army.

Satoshi Kon’s Opus. By Satoshi Kon. Illustrated by the author. Dark Horse Manga, paper, $19.99 (9781616556068). When one of his characters doesn’t like the ending of a mangaka’s series, he steals the last page and the mangaka falls into the world of his story to resolve the mess.

“Dark Horse has long recognized how much fun librarians are as well as the important role they play in placing our books in front of not only graphic novel readers but potential readers, too,” said Dark Horse’s VP of book trade sales, Michael Martens. “For that reason we are happy to again have a number of our titles selected for the YALSA 2016 Great Graphic Novels for Teens list. Thank you, YALSA, on behalf of all our authors, illustrators, and employees.”

Dark Horse congratulates the editors, writers, and artists who worked on each of the above titles and thanks the Young Adult Library Services Association for recognizing these works.