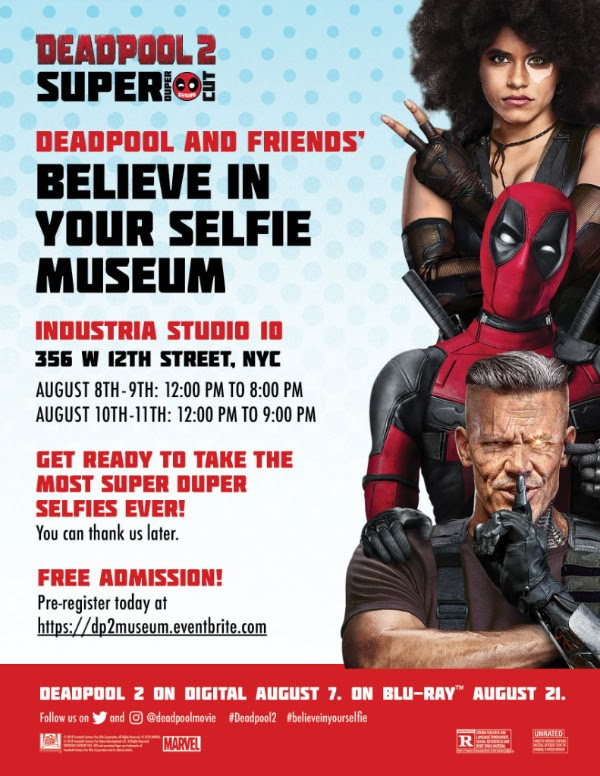 Deadpool “Believe in Your Selfie Museum” Comes to NYC

If you didn’t think the “selfie museum” craze could get any more ridiculous, just wait until Deadpool gets his [baby] hands on one of his very own!

This museum may not have 29 rooms, but it’s not all about size, ok? Nine distinct photo opps give fans the chance to take outrageous selfies recalling some of the Merc with a Mouth’s favorite things—from unicorns and rainbows to his most beloved X-Force members. Dive into Colossus’s big, shiny foam pit and even see what you would look like with a pair of freakishly small toddler legs!

TICKETS
Admission is FREE but extremely limited. Guests (ages 18 and up) must register for an appointment in advance at: https://dp2museum.eventbrite.com

There will be a standby line on-site, though admission is not guaranteed. Standby guests will be accommodated on a first come first serve basis as space allows.

ABOUT THE DEADPOOL 2 SUPER DUPER $@%!#& CUT
The sequel to the first one! (That’s just lazy writing)

But wait…there’s more! If your second time wasn’t enough, your second, second time will blow you away. The Deadpool 2 Super Duper $@%!#& Cut gives you even more of everyone’s favorite red-spandexed superhero now with 15 minutes of brand-new action and jokes lovingly inserted throughout. That’s a whole lotta D in a surprisingly small package!

Add DEADPOOL 2 to your Digital collection on Movies Anywhere August 7 and buy it on 4K Ultra HD, Blu-rayTM and DVD August 21.

Pre-order on Digital at: http://bit.ly/Deadpool2SuperDuper