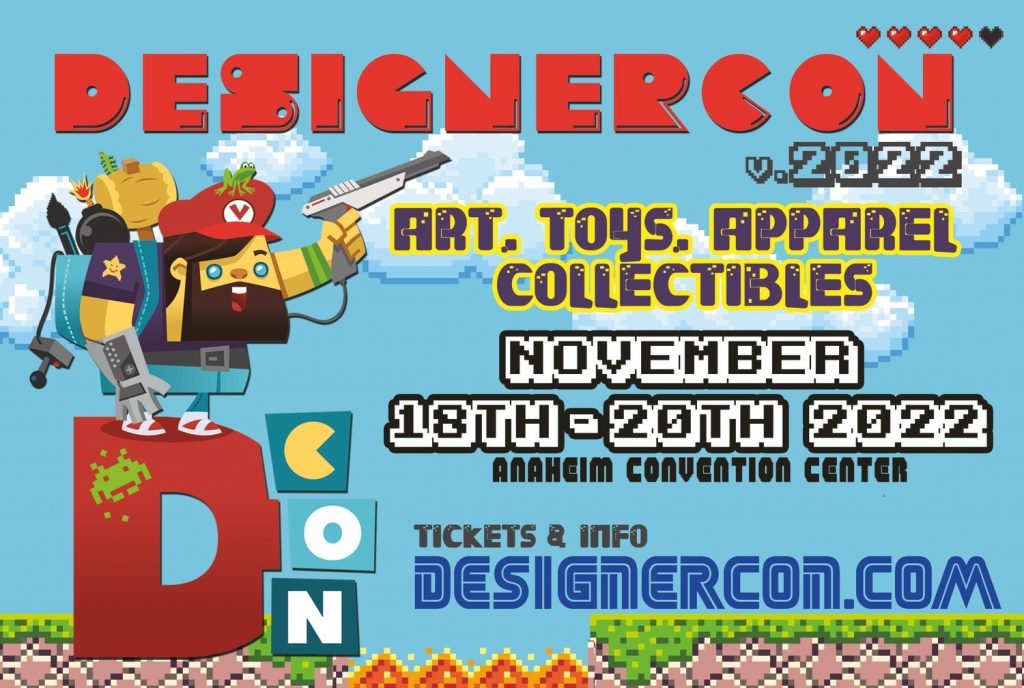 DesignerCon has amassed a hugely impressive following over its 17 years of existence. From an office and a few desks to filling convention centers and lines around the building, the show has grown exponentially since its conception, unifying a community of collectors and enthusiasts. Now, in 2022, DesignerCon is returning to the Anaheim Convention Center, bringing all new content and fan-favorite artists. With three epic partners, the show is reaching wider audiences, elevating the experience for existing enthusiasts and bringing new ones to the wonderful works of art toys and collectibles!

For 2022, VIP Night is presented by eBay. This year, eBay will host the opening night frenzy with special programming, including a highly sought-after VIP box which will feature special merch only available to VIP holders, and an exclusive MEDICOM TOY BE@RBRICK release featuring artist King Saladeen.

DesignerCon is also partnering with leading livestream shopping platform, NTWRK, to expand their audience. This summer, NTWRK will host the official DesignerCon virtual festival, which will feature over 50 individual sellers going live to showcase their products, exclusively on the NTWRK app. The brand will also have a booth at Anaheim’s DCON in November.

VeVe is participating in the DCON mania again, but this year with an expanded presence. After selling out each drop in mere seconds in 2021, the VeVe community and DesignerCon community will have many more opportunities to collect NFTs of their favorite toys and more. VeVe will participate in both DCON London and the flagship convention in Anaheim.

Longtime partner, Japanese-based MEDICOM TOY returns to DesignerCon, their only US show, releasing rare and exciting figures from their vault including the 2022 DCON Artist Pack including pieces from Doktor A, Hannah Webb, SHAG, Nina Palomba, and Bobby Hundreds. The highly coveted collectible badges are being designed by artist Persue, ensuring everything, including the ticket itself, is iconic.

About DesignerCon
Founded in 2005 by Ben Goretsky, DesignerCon brings together artists, manufacturers, distributors, and retailers in the designer toy/ vinyl collectibles market and has grown to incorporate everything in the design world including apparel, plush, printing, sculpture, designer toys, and both fine and urban art.