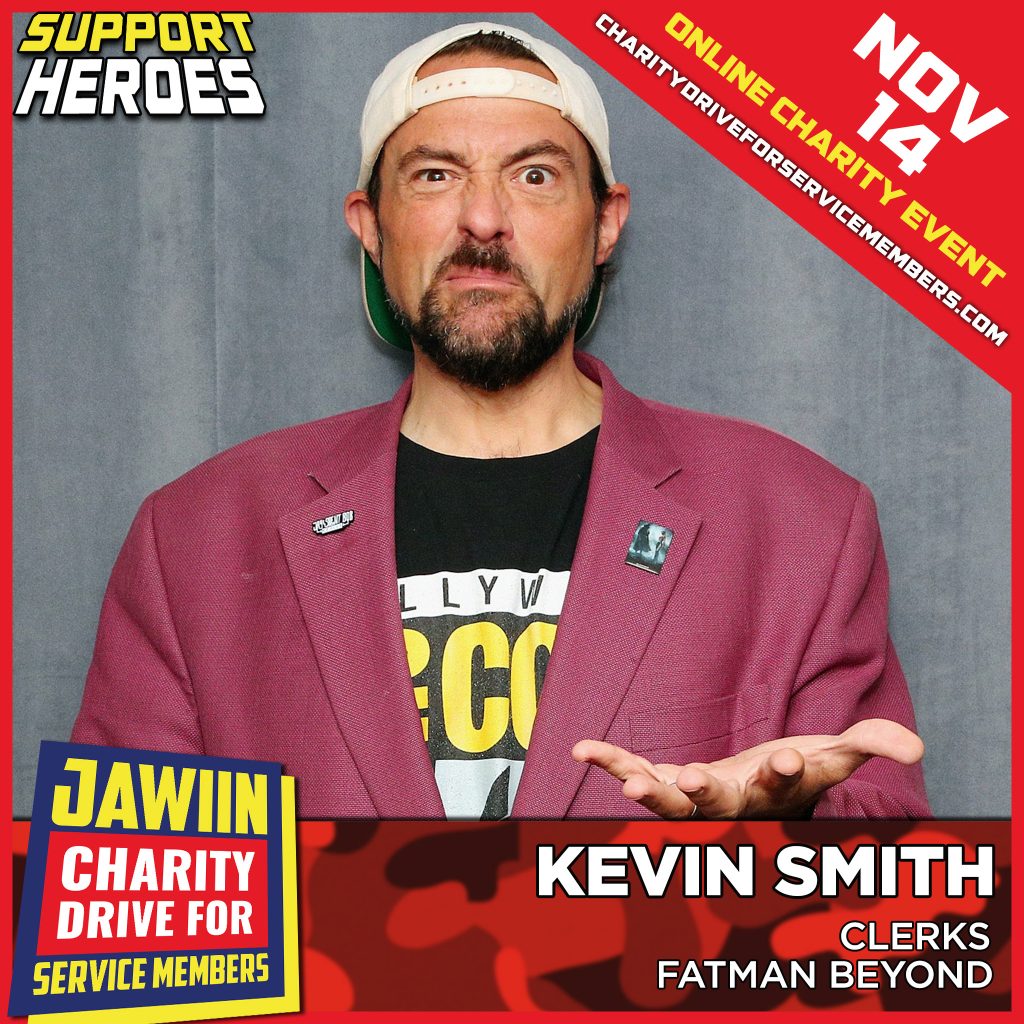 In honor of Veteran’s Day, the 6th annual The Jawiin Charity Drive for Service Members is proud to announce that they are going digital this year! Join founder, Veteran of Operation Iraqi Freedom, and Ringo Award-nominated writer Jason Inman (Jupiter Jet, Science! The Elements of Dark Energy, Super Soldiers), for a free live 5-hour virtual event to help raise $5000 for Operation Gratitude, featuring guests including Director Kevin Smith (Clerks, Mall Rats) as well as an exciting list of celebrities and comics creators. Funds raised will be put towards wrapping and shipping care packages to service members all across the world that include snacks, hygiene products, entertainment and even comic books!

The Jawiin Charity Drive for Service Members was founded in 2015 by Jason Inman. Jawiin stands for (Ja)son (Wi)lliam (In)man and covers the brand of Jason Inman’s podcasts and videos. In partnering with Operation Gratitude, the Jawiin Charity Drive has sent over 144,300 comic books to service members overseas, wounded warriors recovering in hospitals worldwide, and their families back stateside.

The 2020 Jawiin Charity Drive for Service Members will be a free-to-view live 5-hour virtual show with the goal to raise $5000 for Operation Gratitude to use towards packaging and shipping care packages to service members all across the world. These care packages include snacks, hygiene products, entertainment and even comic books!

“We’re using the heroes of comic books and movies to support our real heroes, U.S. Armed Service Members, “ said Jason Inman, “When I received a care package when I was deployed to Iraq, it brought so much joy to the hardest year of my life. I want every service member to feel the same way.”

With the help of drive organizer Ashley Victoria Robinson and engineer Christian Ruvalcaba, each hour of the Jawiin Charity Drive for Service Members will include a Comic Convention style panel with celebrity guests. One of the very first guests to join this special charity event is is famed Hollywood Director and Podcaster, Kevin Smith!

“What a great cause! I love comics and I love this country,” said Tom King. “So when Jason and Ashley asked me to help them fundraise for Operation Gratitude, and said I could just talk with Mitch and Doc about comics for an hour, I instantly said yes!”

In addition to panels, the highest donor of each hour of the livestream will win a prize. These prizes include original art by comic book luminaries Dan Jurgens (Death of Superman, Booster Gold), Cully Hamner (Black Lightning: Year One, Detective Comics), and Brett Booth (X-Men, Titans) and signed copies of Jason Inman’s prose book Super Soldiers: A Salute to Comic Book Heroes and Villains Who Fought for Their Country.

The Jawiin Charity Drive for Service Members will be available to livestream on the official Charity Drive website, which also includes the programming schedule for the show as well as a link to donate to Operation Gratitude directly.