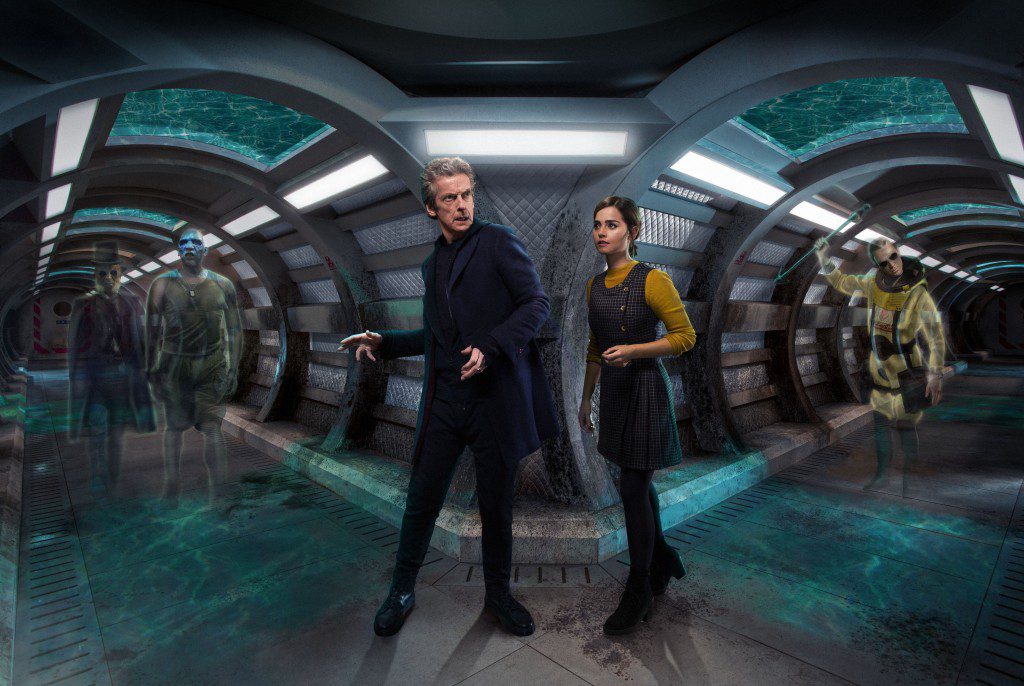 Doctor Who Review: Under The Lake

Do you believe in ghosts? Peter Capaldi’s first attempt to answer that question only led to a disappointing conclusion (Hide). This time around, his battle with these violent apparitions takes a much more terrifying turn as The Doctor follows the old adage, if you can’t beat them, join them.

Taking a journey into an underwater base, The Doctor and Clara find a team of scientists, soldiers, and business men hiding from 2 homicidal ghosts. One spirit appears to be a rockabilly old man in a top hat, and the other is the crew’s recently deceased commander. Appearing to originate from an alien ship that the underwater crew finds on the lake bed, the spirits seem to be acting as beacons, sending a signal into space. After recruiting a third ghost (by killing the business man), the team of apparitions attempts to flood the base and kill the entire crew.

This underwater adventure returns The Doctor to his horror roots while staying firmly in the science fiction realm. The spirits are genuinely frightening, yet clearly alien in origin. Toby Whithouse does a great job balancing the two genres while unraveling the mysterious purpose of the ghosts and their attempts to kill the crew of the station. Unfortunately for many fans, Whithouse also ensured that the sonic sunglasses are here to stay as The Doctor used them to project an image of Clara to trick the ghosts.

One of the details that was sprinkled through the episode may be the key to the whole mystery. While the base appears to be military in origin, it is sponsored by an oil company (who the business man works for) called Vector. Not only is the name mentioned more than once, but the logo is seen on several of the glass doors throughout the station. Vector’s involvement may hold the key to discovering what the ghosts want and how to defeat them.

With the episode ending of a cliffhanger in which The Doctor travels to the lake before it became a lake, and then reappears in the water to Clara as a ghost, fans were left on the edge of their seats waiting for the second half of the 2-part tale (Before the Flood airing next week).

Rating 4.5 out of 5. With the show returning to its roots and a ghostly Doctor haunting the station, there was a lot to be excited about this weekend.