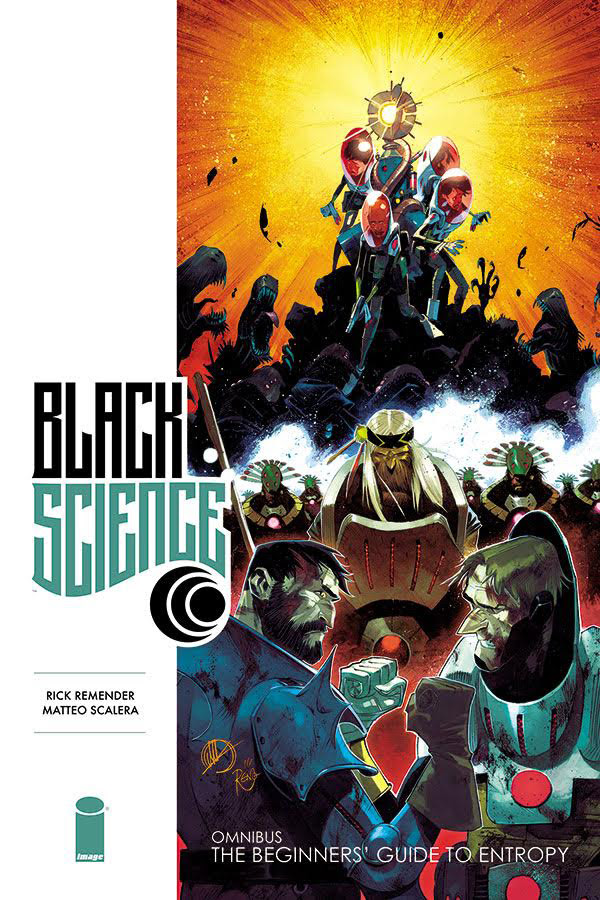 This premiere hardcover edition will collect the first three story arcs of the beloved, pulp science fiction world-hopping adventure and feature an array of tantalizing extra material for fans to enjoy.

BLACK SCIENCE follows Grant McKay, former member of the Anarchist League of Scientists, who has finally done the impossible; he has deciphered “Black Science” and punched through the barriers of reality. However, what lies beyond the veil is not epiphany, but chaos.

Now Grant and his team are lost, living ghosts shipwrecked on an infinite ocean of alien worlds, barreling through the long-forgotten, ancient, and unimaginable dark realms. The only way is forward. The only question is how far are they willing to go—and how much can they endure—to get home again?

“This hardcover commemorates the three-year anniversary of when we started production on the book,” said Remender. “Everyone involved has worked tremendously hard to make this prestige hardcover edition a must-have for fans of the book and new readers. It’s wall-to-wall with extras and all that lush art by Matteo Scalera, one of the most talented guys in comics. When you see Matteo’s work at this size you’ll be blown away.”

BLACK SCIENCE DELUXE HARDCOVER EDITION, VOL. 1 (ISBN: 978-1-63215-493-4) hits comic book stores on Wednesday, February 3rd and bookstores on Tuesday, February 9th, and will be available for $49.99. It can be ordered by retailers from Diamond Book Distributors with Diamond Code SEP150588. It can be pre-ordered now on Amazon, Barnes & Noble, and IndieBound.