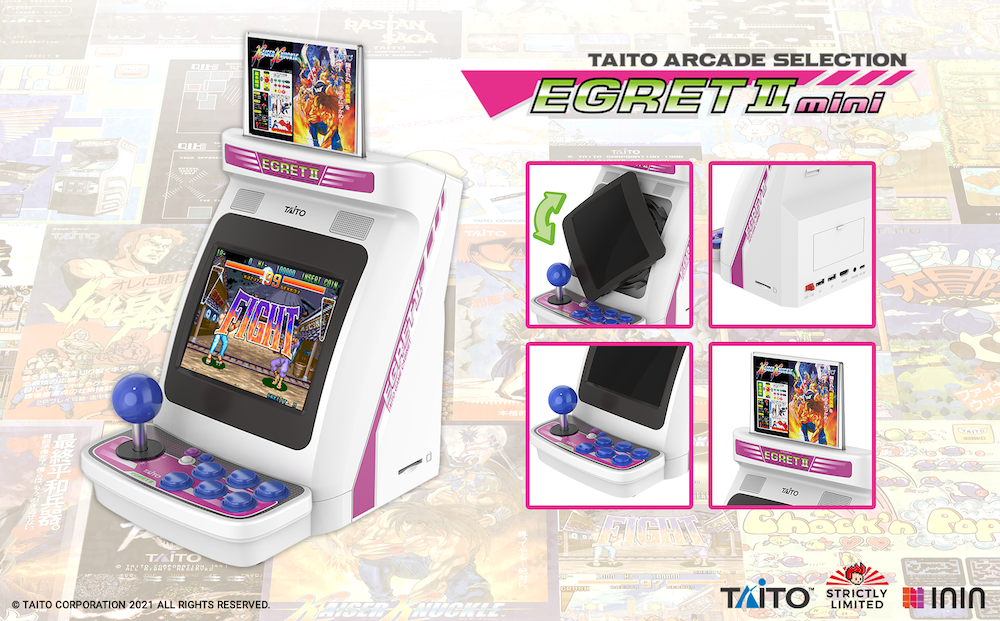 After the announcement of the EGRET II mini in December last year, Strictly Limited Games and ININ Games are happy to kick off the new year with more news and details about the awesome home console version of the legendary TAITO retro arcade cabinet. As of today, reservations for the EGRET II mini – Limited Blue Edition can be made! An exclusive Western edition, limited to 5,000 units worldwide, split over different versions that also come with special content.

Game publishers Strictly Limited Games and ININ Games are proud to bring the EGRET II mini to the West as their first hardware release, allowing fans to take a journey through the rich arcade history of legendary video game developer TAITO. The console comes with 40 iconic retro games of various genres and tons of awesome features; like a 5-inch 4:3 rotating screen for horizontal and vertical alignment, an adjustable joystick to switch from 8 directions to 4 directions and a lot more! These features are on full display in the new trailer.

The EGRET II mini – Limited Blue Edition comes with blue buttons and joystick presenting an exclusive color scheme, limited to only 5,000 units worldwide. Prices start at 229.99$ / 199.99€ (excluding tax and shipping costs). There will be three exclusive editions including awesome physical collectibles in addition to the console.

As the EGRET II mini – Limited Blue Edition will only be available in a limited quantity of 5,000 units, retro fans can now already make their reservation, obtaining the right to secure one of these faithfully miniaturized high-end home consoles as soon as pre-order starts. The three editions can be reserved as of today:

For the EGRET II mini – Limited Blue Edition Bundle from ININ Games, you can register on their partner’s website Gamesrocket to reserve the console and also the three separate, optional controllers: https://gamesrocket.com/

For the EGRET II mini – Arcade Cabinet Blue Edition and the Game Center Blue Edition with great additional collectibles, visit the homepage of Strictly Limited Games and register to make your reservation: https://www.strictlylimitedgames.com/