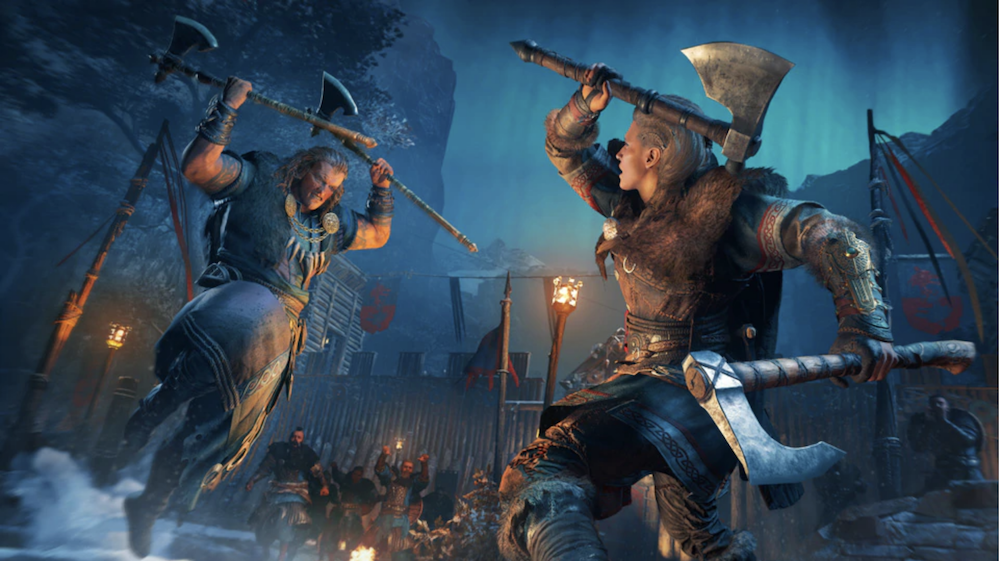 Today, Ubisoft announced that Assassin’s Creed® Valhalla, the next iteration of the Assassin’s Creed franchise, is now available on Xbox Series X|S, Xbox One consoles, PlayStation®4, the Epic Games Store and Ubisoft Store on Windows PC, as well as on Stadia, Amazon Luna and Ubisoft’s subscription service, Ubisoft+.* Assassin’s Creed Valhalla will release on PlayStation®5 alongside the launch of the console on November 12.** The game is rated M for Mature and its standard edition is available for a suggested retail price of $59.99.

With development led by Ubisoft Montreal,*** Assassin’s Creed Valhalla offers players the captivating experience of playing as Eivor, a legendary Viking warrior, driven from Norway by endless wars and dwindling resources in ninth century AD. Players can relive the ruthless fighting style of Viking warriors with a revamped dual-wielding combat system and experience new gameplay features, including raids, settlement-building, and the ability to customize hair, tattoos, and more. Political alliances, combat decisions, and dialogue choices can influence the world of Assassin’s Creed Valhalla, so players must choose wisely to protect their clan’s home and their future.

Players can also embark on more adventures with the Assassin’s Creed Valhalla Season Pass. Included in the Gold, Ultimate and Collector’s Editions, or available for purchase separately for $39.99, the season pass includes:

In addition, all players will have access to an extensive lineup of free seasonal content, including new narrative content and in-game events available after launch. Each season will last three months and will be accessible to all player types and levels of progression, focusing on gameplay, world evolution, and other exciting content. Season 1 will launch in December and includes:

As a result of collaboration with Microsoft to implement Xbox Velocity Architecture and DirectStorage API on Xbox Series X|S, players will have faster loading speeds for more play time, and a smoother and more powerful experience in 4K resolution at 60 frames per second on Xbox Series X.

PlayStation®5 players can immerse themselves in the stunning open world with the power of the Tempest 3D Audio Engine to hear the environment around them, along with detailed 4K at 60 frames per second visuals and faster loading speeds due to the additional power of the console’s ultra high-speed SSD.

Assassin’s Creed Valhalla also supports full cross-platform progression across all platforms and services with Ubisoft Connect, the ideal destination to connect with friends or participate in in-game events and activities. Along with new and exciting time-limited and community challenges, the service brings a cross-game loyalty system that lets players earn an uncapped number of Units to spend on unique rewards like weapons, outfits and consumables. For more information about Ubisoft Connect, please visit ubisoftconnect.com. For more information about Assassin’s Creed Valhalla, please visit assassinscreed.com.

For the latest news on Assassin’s Creed Valhalla and other Ubisoft games, visit news.ubisoft.com.

*$14.99 per month. Cancel anytime. Gold and Ultimate Editions will be available as part of a Ubisoft+ subscription. More information at ubisoft-plus.com.