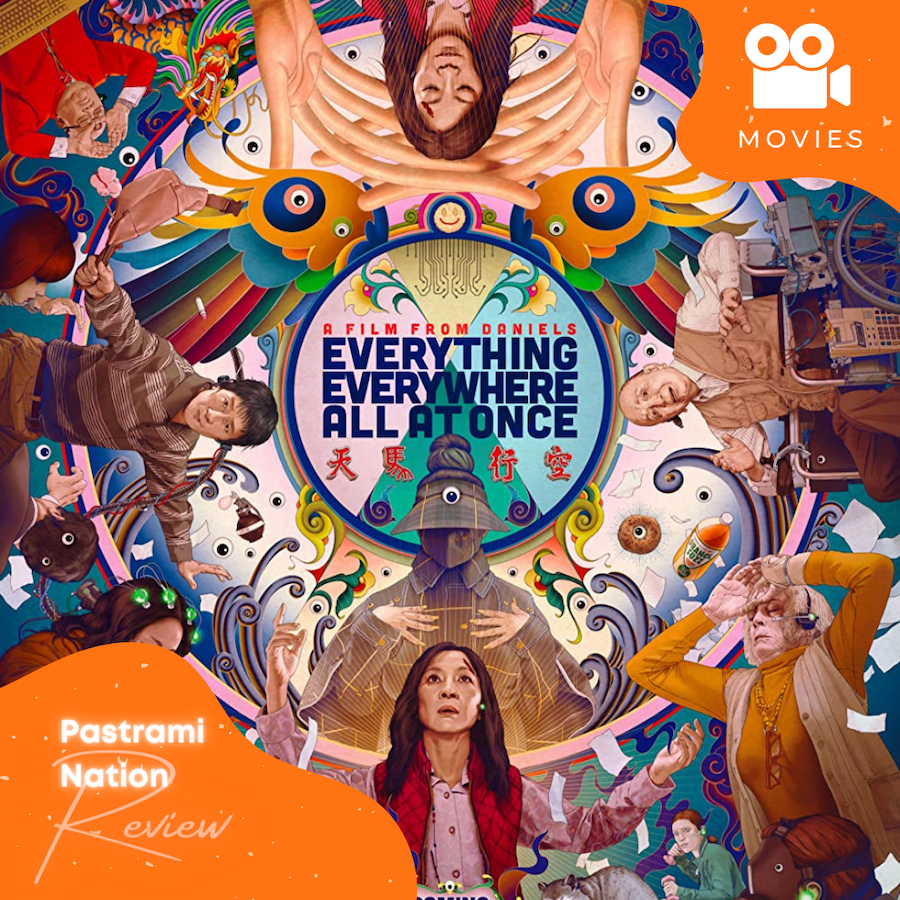 Everything Everywhere All At Once Review

It’s so hard to pin down a movie like Everything Everywhere All At Once. Being one of those movies that are hard to describe and oversell at the same time, it manages to draw from so many different influences but still feels completely unique. Filmmakers Daniel Kwan and Daniel Scheinert (collectively known as Daniels) have crafted a story that feels like a mashup of The Matrix and Eternal Sunshine of the Spotless Mind but told through a Douglas Adams lens. It’s a sci-fi/action/comedy family drama that captures what life is like for many people while also taking us on a journey, unlike anything we have ever seen before.

While not trying to be hyperbolic, I can’t stress enough how crazy and bizarre this movie is in the best way possible. At times it feels like a fever dream, so much so that I’m anticipating a second viewing just to take it all in. Evelyn (Michelle Yeoh) is chosen to save mankind from an unstoppable threat in the film. It’s not only her reality that is in danger as she finds out that the multiverse exists and all of them are being destroyed. In these different universes, there are versions of her living different lives. In one universe, she is a martial arts expert; in another, she is a master chef, and in another, she (and everybody else) have hot dog fingers, and she’s married to somebody else. It’s all of these versions of herself that she must learn to channel to accomplish the goal of saving the multiverse. The way she does it is unorthodox, but it pushes her to her limits for the better.

While the sci-fi multiversal story is what moves the plot forward, it’s the familial drama that is the heart of the movie. Evelyn is dealing with so many things in her life that it’s hard to balance it all. She’s trying to keep the laundry mat she runs with her husband afloat and keep her marriage together. On top of that, her daughter Joy (Stephanie Hsu) is trying to escape her overbearing ways, and her elderly father (James Hong) needs her to take care of him. The idea of having so much on your plate and struggling with it is the perfect metaphor for ADHD, which this movie tackles head-on. With everything going on all at once, it portrays a person on the verge of a breakdown and trying to keep it all together. It purposefully goes off the rails to bring you into the chaos but then presents a sense of calm. It’s not always easy to digest, but it’s realistic in its portrayal and doesn’t shy away from the realities of living your life, asking yourself, “what if?” every step of the way.

With all that happens throughout the film, credit needs to be given where it’s due. The Daniels give us an astonishing tale, but the talent in front of the camera makes it pop off the screen. Michelle Yeoh has recently taken the well-deserved spotlight again due to her performances in Crazy Rich Asians and Gunpowder Milkshake. In this movie, she is so good, nailing the role with a delicacy and dedication like no other. As fantastic as she is, it’s Ke Huy Quan who steals the show. Most fans know him as Short Round in Indiana Jones And The Temple Of Doom or Data in The Goonies. After taking a break from acting, he’s been reinvigorated and is better than ever as Evelyn’s aloof husband, Waymond. More so than her, Waymond changes from goofy husband to badass martial artist on a dime. He is the conduit between the “real” world and the others, flawlessly playing it. It will be a real shame if neither of them are nominated come awards season for their performances.

It may be too early to say Everything Everywhere All At Once is the best movie of the year, but it will be hard to top. It wears its heart and utter insanity on its sleeve and displays it as a badge of honor. In the end, it has a beautiful message about kindness and how the universe isn’t as bad as it seems. This movie may not be everybody’s cup of tea, but if you are willing to have all of your emotions put to the test, you can’t get better than this. It’s a masterpiece!

Kevin Hoskinson
0
Tags :
Everything Everywhere All At Once Review