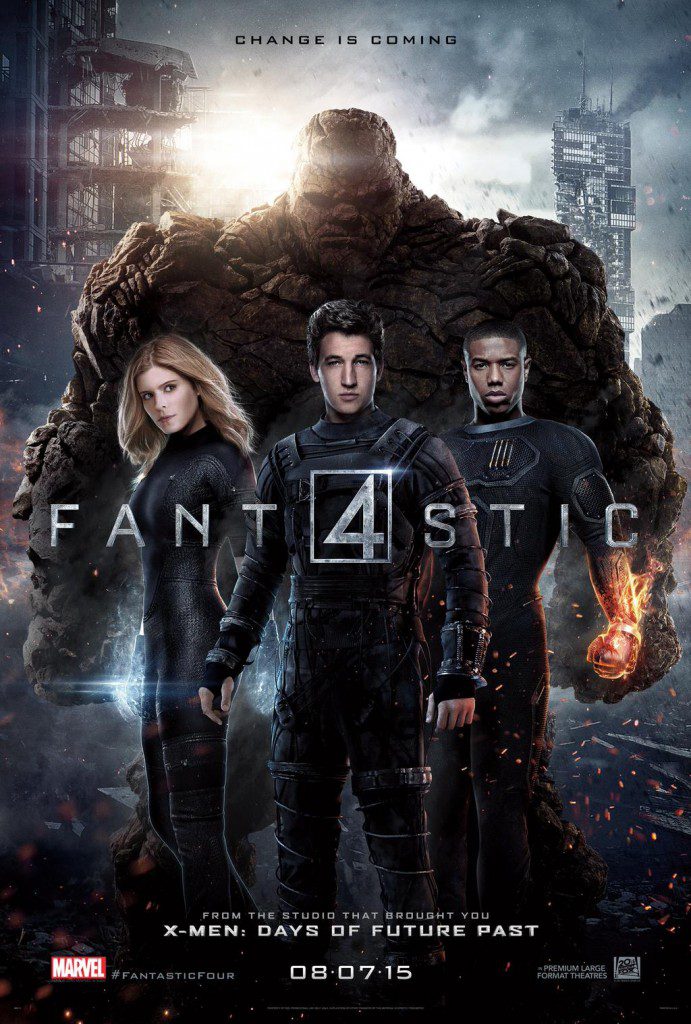 (Victor Valley)—Comic book movies have become box office blockbusters over the years, and magnets that draw moviegoers to fill the theaters. Marvel Studios, and their stable of super heroes, have been mainstays in the cinema spotlight for some time now. The Avengers, Iron Man, Captain America, the X-Men, even the Fantastic Four enjoyed time in the limelight for two films. Now comes the word everyone shudders at in cinema: reboot. 20th Century Fox has a new Fantastic Four, complete with a new director and cast, but does the film live up to the tag line from the comics, “the world’s greatest comic book magazine”?

Not by a long shot.

Directed by Josh Trank, the man behind the sleeper hit “Chronicle”, this new Fantastic Four takes a different approach. Young genius Reed Richards (Miles Teller) and his longtime friend Ben Grimm (Jamie Bell) create something extraordinary, something that important people in this world want to figure out: teleportation. Richards is recruited into a secret organization working towards such a goal, headed up by Doctor Storm (Reg E. Cathey), who is joined by his children, Sue (Kate Mara) and Johnny (Michael B. Jordan), as well as a begrudged genius hacker, Victor Von Doom (Toby Kebbell). It’s this project that leads to the young group to get exposed to foreign elements that gives them their infamous powers.

Well, that might sound okay on paper, but it absolutely does not work. What the Fantastic Four has always been about is family- Marvel’s first family. There is nothing in this film that even resembles the heart of the Fantastic Four from the comic books. There is no real solidarity, no connection (save for Reed and Ben)

I will break down the film by the good and the bad. Let’s start with the good, since there’s far less to list. The special effects are spectacular- The Thing looks far better than his previous incarnation, and the “flame on” Human Torch looks like the torch I remember from the comics back in the late 80’s to early 90’s- by far the best Human Torch we have seen thus far. Most of the young cast really do a decent job as well.

Sadly, it’s the snail like pace of a hodgepodge of puzzle pieces plot that dooms this movie. It took a good hour and 15 minutes to even have the pace pick up slightly. I don’t like to check the time during a movie, but I kept checking and checking to see how much longer I had to endure this. The storyline is so predictable, so juvenile, that anyone can see what’s going to happen next.

Every superhero is defined by their villain, so in the case of this sad excuse for a Dr. Doom, it makes Marvel’s premiere quartet a shell of a team. Dr. Doom, if you can call him that, is nothing like the evil genius the Marvel Universe knows. He looks more like a mummy wrapped in a dirty sock. He does fit as a villain for this film, as he is what such a sloppy, stitched together film deserves.

I am a huge fan of Marvel Comics, and of the Fantastic Four. This felt more like a fan film than an actual cinematic production. Marvel Studios must be clamoring to get the film rights back from Fox and do justice to Marvel’s first family. If you already saw the film- I’m sorry. If you haven’t save yourself the money- this film will make you hate the Fantastic Four, and nobody should hate such a classic team. I give Fantastic Four a not so fantastic 2 out of 5.