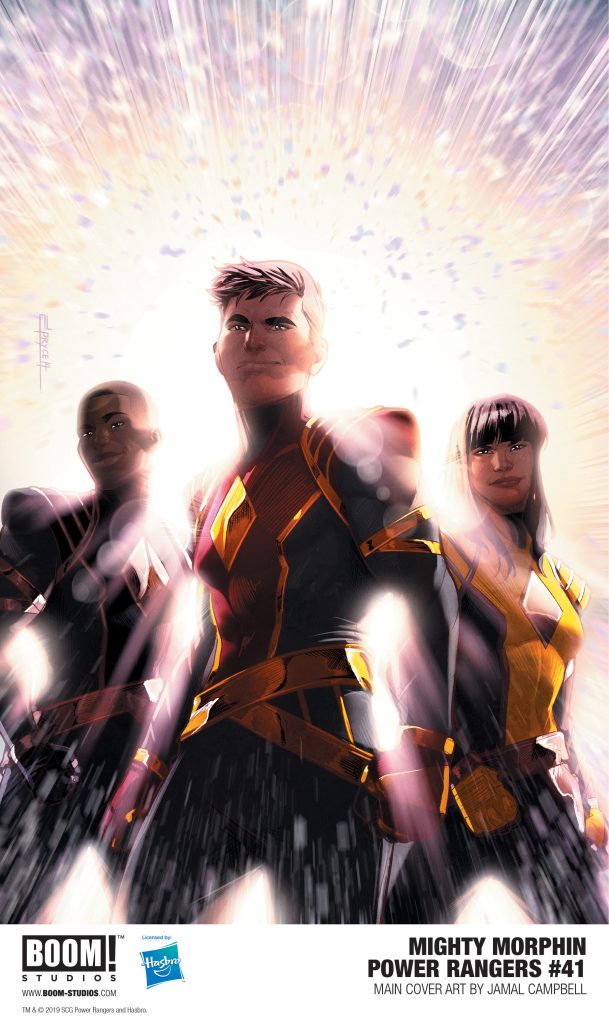 The all new covert team of Power Rangers has been revealed – and it’s Jason, Zack, Trini, and a BRAND NEW RANGER joining them to form the OMEGA RANGERS! But who is this all-new Power Ranger? Where did they come from? And why are the Omega Rangers hiding their existence from the Mighty Morphin Power Rangers?

Now fans can collect each of the Mighty Morphin Power Rangers in a new set of Trading Card Variant covers, illustrated by Kris Anka and designed by Dylan Todd. The MIGHTY MORPHIN POWER RANGERS #41 cover by Anka features the newest Red Ranger, Rocky DeSantos, with an image of the Red Ranger in action on the front, and all his stats on the back cover, including his team name, alias, biography, and Alpha-5’s assessment of the Ranger who stepped in to take on Jason’s mantle.

Print copies of MIGHTY MORPHIN POWER RANGERS #41 will be available on July 24, 2019 at local comic book shops (use comicshoplocator.com to find the nearest one), or at the BOOM! Studios webstore. Digital copies can be purchased from content providers like comiXology, iBooks, Google Play, and the BOOM! Studios app. Softcover collections of MIGHTY MORPHIN POWER RANGERS,  and other Power Rangers releases from BOOM! Studios are available now, everywhere books are sold.

For continuing news on MIGHTY MORPHIN POWER RANGERS and more from BOOM! Studios, stay tuned to www.boom-studios.com and follow @boomstudios on Twitter.