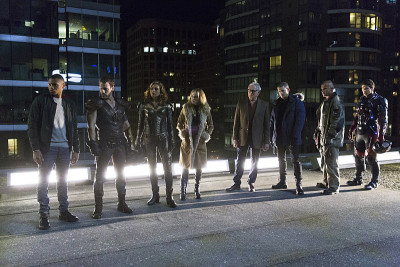 This week, the CW will debut their newest superhero drama set in the Arrowverse, DC’s Legends of Tomorrow. While some information about this new project has been leaked, most of this show remains shrouded in mystery.

The show is based upon time-traveler Rip Hunter assembling a team of heroes, villains, and everything in between in an attempt to prevent the immortal Vandal Savage from taking over the world. Featuring characters from The Flash and Arrow such as Captain Cold, Sara Lance, ATOM, and Firestorm, Legends of Tomorrow puts these secondary characters on center stage in a time-traveling, action packed adventure series.

Outside of the cast of characters and the premise, little is known about the plot or how the team plans to stop the immortal supervillain. Knowing the characters and how the Arrowverse works, we have come up with 5 predictions for the first season of the CW’s latest addition to its DC Universe.

Captain Cold Will Betray the Team

Is there really any doubt that Wentworth Miller’s Captain Cold will be the weak link in the Legends of Tomorrow chain? Leonard Snart does not play well with others (except for Mick Rory and his sister) and will break any vow or friendship if he feels that it will benefit him.

Having a little bit of hero in him (as shown this season when protecting his sister), he will be recruited by Rip Hunter. He will even go along with the program, at least for a while. Unfortunately for the team, the second that he feels he can get the upper hand, I believe he would be very happy to take his freeze gun and steal the time machine, leaving the team stranded and using it to create a new criminal empire and perhaps set himself up as the primary villain for the second season.

Even if the depth of his betrayal is not as dramatic as the example above, it will only be a matter of time before Snart stabs his teammates in the back and leaves them in a terrible position.

Sara Lance Will Be Left Behind

If the episode titles are any indication of the plot line, not everyone will be making the trip back to the present at the end of the season. With the final episode of the season titled “Left Behind”, it is very likely that one of the team members will fail to make the return trip either by choice or by chance.

The most likely candidate is Sara Lance aka. White Canary. One of the few spoilers that has leaked online is that Sara will have a female love interest who lives in the past (played by Ali Liebert). Having had a less than successful love life to date, Sara may find an instant connection with this new cast member and may not want to leave her behind. Given that there is already a Black Canary in the present, Sara may choose to stay behind and have a normal life with her lady love (no one can argue that she does not deserve to).

The only problem with this theory is that she has been “dead” twice on the show and her family has gone through hell with her in-flux state between life and death. Having just been brought back to life this season, it would be hard to imagine that she would again be permanently away from her family in the present. Then again, it would add an interesting element if she turns up on her father’s door step as a senior citizen who has lived a long and happy life.

Whenever you assemble a team this big and set them after an all-powerful and immortal villain, it is a good bet that all of them will not be finishing the season alive.

This begs the question: who is going to get the axe? Because they have just been improved or saved or resurrected, ATOM, Firestorm, and White Canary are almost guaranteed to finish the season in the land of the living. Chances are that the team will not be able to operate the time machine without Rip Hunter. This makes him safe. Captain Cold is a very important part of The Flash mythos. It is hard to imagine The Flash without him. This leaves Hawkman, Hawkgirl, and Mick Rory.

While one or both of the Hawks makes for an interesting choice (they are simply reincarnated anyway), my money is on the pyro with the flame gun. Heat Wave has never been the brains of the operation when working with Snart, and it seems that without his flame gun, he is just another average criminal. His death would have the least effect on the growing CW Arrowverse. Given all that, it would be a safe bet that the fire to Snart’s ice will be extinguished before season’s end.

The Multiverse Will Be Mentioned or Explored

The second season of The Flash began with a bang when Jay Garrick announced his presence and introduced the multiverse to the CW. While The Flash has just scratched the surface of the infinite possibilities taking place in parallel universes, Legends of Tomorrow can take the opportunity to explore time and different universes.

To date, only the main Earth 1 and the 50’s-looking Earth 2 have been explored. With several more versions of earth that have yet to be touched upon, Rip Hunter’s intrepid team could go looking for more allies in alternate versions of current heroes and villains.

It is yet to be determined if Hunter’s time machine can also travel through the multiverse. If not, he has to at the very least know about its existence. It would be shocking if there is not even a mention of Earth 2 or possibly another Earth (perhaps the villainous world where Johnny Quick terrorizes the people of Earth).

They Will Team Up With Past Versions of Hawkman and Hawkgirl

Having discovered the immortal nature of Kendra and Carter’s reincarnated past, fans may expect to see more of the winged duo than advertised.

It was explained in the Flash/Arrow crossover (Legends of Today and Legends of Yesterday) that Hawkman and Hawkgirl have been battling the undying Vandal Savage since ancient Egyptian times. Every time they are reincarnated, Savage kills them and they are reincarnated again, only to fall to him in an endless chain of repeating events.

Because Rip Hunter has a time machine and the Hawks have existed for thousands of years, it is quite possible that they could run into a past version of the flying superheroes. With Savage as the primary antagonist for the first season, the LOT team is going to need all the help they can get in order to take down the tyrannical and immortal villain. Having four (or more) Hawks in their corner would not only make for a fantastic final battle, but it would also help explore the history of 2 characters that have only begun to develop.