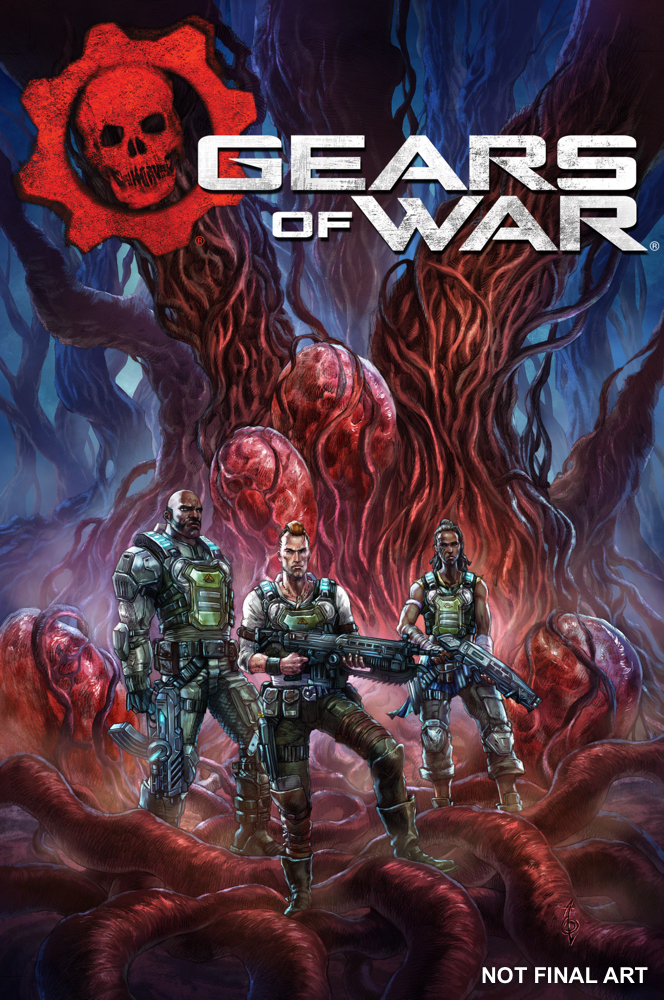 Rise of RAAM writer Kurtis Wiebe returns for Gears of War: Hivebusters, joined by Dark Souls artist Alan Quah. I’m really excited to get the chance to review this, as it’s coming before the release of Gears of War 5, and this is done in conjunction with Microsoft Studios. This comic has the chance to shed some light on the new game, and possibly touch on some of the older classics I love as well.

Because I don’t know what might be associated with Gears of War 5, I want to drop a possible spoiler warning here! If you’re a fan of the games and don’t want anything ruined, you may want to click away now. Still here? Great, let’s get into it…

The premise is simple enough and summed up in the name; Scorpio Team, comprised of Mac, Lahni, and Keegan, have one job: infiltrate Locust Hives and Bust ‘em! The story opens with Mac in the middle of a war-zone, and he’s pinned down pretty hard by hundreds of monstrous Locust soldiers. Beautiful full action pages jam-packed with horrific detail sends a clear message to the reader of the horrors war with the Locust Hive has wrought Humanity.

The way the story opens, you can tell something is amiss. Voices in Mac’s head, the way he’s falling through strange water. Lahni and Keegan bust in to save the day, but are dressed up in a gown and overalls. The world starts to fall apart at the seams, and we discover that the three of them were hooked up to Hive pods.

We’ve seen these pods appear in the games, whenever a human is taken by the Hive they are placed in these pods and transformed into Locusts. While inside, the person is connected with the Hive mind and can see just what is going on in that communal brain of theirs. Here, it looks as if Scorpio Team has found a way to dive into these pods and use them to their advantage, catching a glimpse of enemy plans.

After they’ve got the intel they needed, they light the place up, and things quickly get exciting. Panel composition, art style, color, everything fits together perfectly feeding into the action and story to create some genuinely fantastic pages. Each page turn was riveting, and for the first time in a long time, I reached the end of the book and felt heartbroken, wanting to know what happened next!

At the end of the issue, we see Scorpio team take one final suicide mission to bust the Hive that busted Mac’s hometown. We hear a lot of smack talk from Mac about his home, so I wondered why he would go back if he hated the place? It becomes quickly apparent that there is more to Mac’s story than he’s letting on, and I can’t wait for the next issue to find out what it could be!

Wiebe and Quah have done the series justice, and I can honestly say I’m not at all disappointed. Maybe a little too much swearing, even for a Gears title. We had a four letter word in just about every bubble, but perhaps I do not remember just how much swearing was in the games. The camaraderie between the team members is on point, it’s clear this isn’t just your average gore-fest for your eyes, it’s going to be full of heart and soul too.

An excellent read for fans, but might not be a good start for anyone new to the franchise. I give Hivebusters 8.5 Snatchers out of 10.