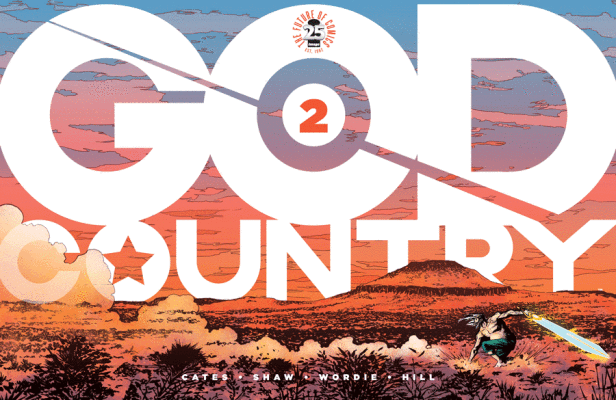 When the debut issue of God Country hits shelves last month, I was totally caught off guard. The story of Emmett Quinlan, a man who’s mind had succumb to Alzheimer’s Disease and was no longer able  to live on his own, suddenly gets a second chance when a demon attacks his West Texas home. By grabbing a massive sword that fell from the sky, it not only allowed Emmett the power he needed to protect his son and family, but it also let him reclaim his mind. But at the end of the first issue, we saw a massive being floating in space, looking for his lost sword- enter issue #2.

From writer Donny Cates and artist Geoff Shaw, with colors by Jason Wordie, this second issue serves as a set up and clarification to future issues, as well as catches us up to what exactly is going on after last month’s pedal to the metal, action packed and emotional slugfest. We see glimpses into the power the sword has granted Emmett, and we see the god the sword belongs to, Aristus- God of War, Blood and Honor. I didn’t think we would get a face-to-face encounter with Emmett and this god so soon, but we got it, and it was fantastic. Turns out the sword is a god of sorts as well: Valofax. But by the end of the book, we see an elder god isn’t going to leave the sword to a mere mortal, as we gear up for a titanic battle.

You know what makes God Country so good? It’s the emotional side of it all. Many of us, if not all, have seen the effects of dementia. There is nothing more devastating than seeing a life well lived lost to this disease. So to see Emmett regain his mind, regain his family, regain power over his life, it’s a refreshing take on a hero. Image Comics consistently pushes the envelope, creating heroes unlike any we see from the other publishers. Sure, you could say a mystical weapon from the gods bestowed to a mortal has been done before, but tell me: when have you been made to care so much for a character given a new lease on life?

This issue is a fantastic romp, answers a lot of questions and makes fans both excited and worrisome for the future. God Country is the series to beat right now, 2017- so do your best.