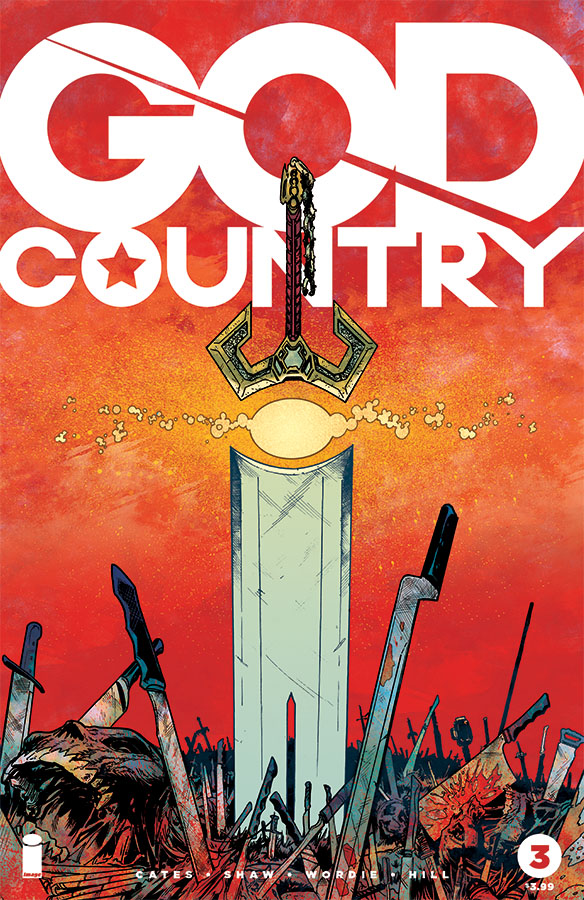 When God Country debuted earlier this year, it gripped me from the first issue. The story of Emmett Quinlan, a man who was on the brink of the end as dementia had taken away much of who he was. But when a giant sword fell to the Earth and Emmett grabbed it, the Alzeheimer’s went away, and allows for Emmett to protect his son and his son’s family in the face of an unknown monster. We found out that the sword belongs to a God, and the sword is a being all in itself. But when Emmett refused to give it back, he may have put a target on not only his family, but the entire human race.

Writer Donny Cates, joined by the art team of Geoff Shaw and Jason Wordie, craft another excellent issue in this growing epic. Emmett has been using his powers since grabbing onto the sword- he rebuilt his house, taken care of his family, and started to put his life back together. We get to see how his son and his son’s wife are dealing with the sudden change in Emmett, and how Emmett and his new sword Valofax are bonding, or not. Some humor is worked in before another God attacks, this time being Balegrim, the God of Death. Surrounded by the Death God’s minions, we see Valofax in full effect, and Emmett do what he has always wanted to: take care of his family. But one man can only do so much, and by the end of this issue, someone Emmett loves is taken away, and this can’t be a good thing for the gods that have tested a man on the edge.

This has become the series I recommend to those that are burnt out on the clichéd superhero comic book market. Cates crafts another masterful script, with Shaw and Wordie creating amazing visuals that bring this surreal world to life. God Country should be on your pull list: it is my favorite Image Comics series out right now.