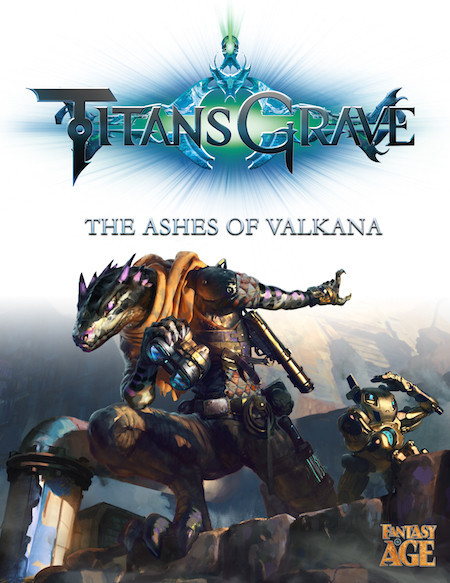 Green Ronin Releases Titansgrave: The Ashes of Valkana Rulebook – Sells Out Day One at GenCon!

After selling out of their initial inventory in less than one day at GenCon, the highly anticipated rulebook to accompany Wil Wheaton’s hit RPG series, Titansgrave: The Ashes of Valkana, is now available for Pre-Order Plus.  Wheaton’s latest TableTop show premiered on Geek & Sundry in June and shot to immediate success thanks in part to a loyal fan base that has supported the show since its inception after a record-breaking Indiegogo campaign in 2014.

Green Ronin’s Chris Pramas comments, “We first talked about Titansgrave at last GenCon, and it’s hard to believe what we accomplished in only one year. The finished book is beautiful and really enhances the experience of the show. I can’t wait for gamers to make Valkana their own.”

Wil Wheaton adds, “All these worlds are yours to explore, except for Dragons & Donuts in Nestora – attempt no adventures there.”

The game is played using Fastasy AGE, the latest iteration of the Adventure Game Engine by Green Ronin Publishing. Fans can now order the Titansgrave rulebook and Fantasy AGE via the Green Ronin website and should note that both book are needed to play the game. The book will be available for pre-order or immediate PDF download. The PDF sold separately is $13.99, but may be added to a pre-ordered print copy for only $5.

For more information and to order the books, visit www.greenronin.com, and check out the latest episodes of Titansgrave: The Ashes of Valkana on www.GeekandSundry.com

Green Ronin Publishing is a Seattle based company dedicated to the art of great games. Since the year 2000 Green Ronin has established a reputation for quality and innovation that is second to none, publishing such roleplaying game hits as Dragon Age, A Song of Ice and Fire Roleplaying, and Mutants & Masterminds, and winning over 40 awards for excellence. For an unprecedented three years running Green Ronin won the prestigious GenCon & EnWorld Award for Best Publisher. www.greenronin.com