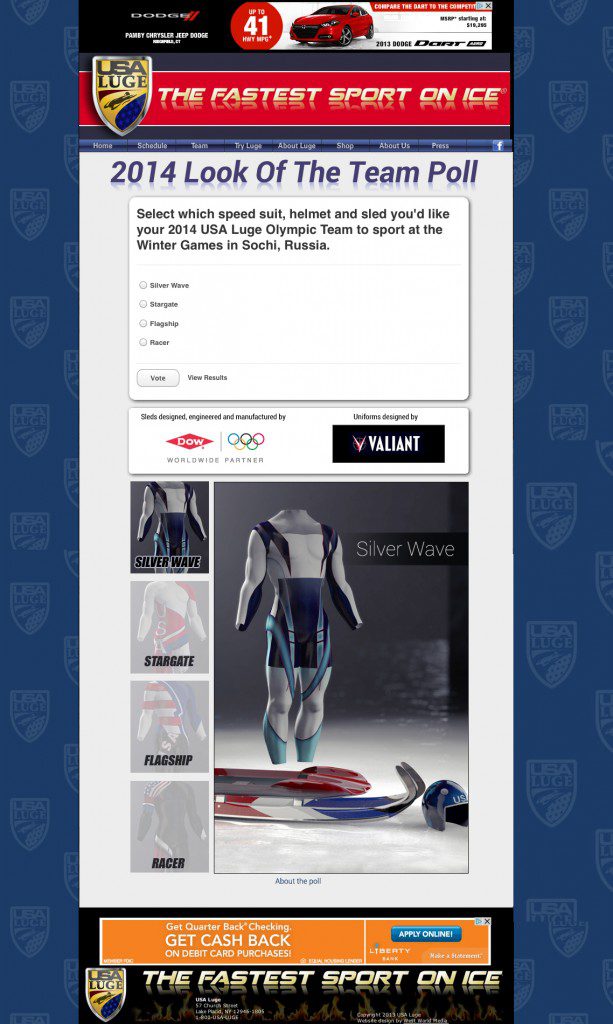 Before USA Luge takes to the ice at the Sochi 2014 Olympic Winter Games, you can help decide which Valiant-designed uniform America’s luge athletes will wear into competition next February.

Valiant is proud to announce that it has partnered with USA Luge, home of the fastest sport on ice, and USA Luge technical partner Dow for a new online contest to choose the final sled, helmet and suit designs to be used in competition at the Sochi 2014 Olympic Winter Games.

Now through August 23rd, fans worldwide can visit www.USALuge.com to vote on their favorite combination of Valiant-designed helmets and racing suits – as envisioned by Harvey Award-nominated artist Khari Evans (Harbinger, Archer & Armstrong) – and Dow-engineered sled! The winning, fan-selected design will join the USA Luge team in competition next February, as they represent the United States at the Sochi 2014 Olympic Winter Games.

“A modern, sharp-looking uniform is more than mere aesthetics, as it helps boost the confidence of athletes,” said Gordy Sheer, 1998 Olympic silver medalist and Director of Marketing and Sponsorship for USA Luge. “Valiant Entertainment has an incredible design sense, and we’re thrilled to have them contributing to the look of the USA Luge helmets and race suits for the Sochi 2014 Games.”

“Valiant is incredibly proud to be a sponsor of USA Luge, and the responsibility of overseeing the team’s next great suit and helmet designs – to be seen in action at the Sochi 2014 Games – is one that we do not take lightly. It’s been an honor to participate in the process, and we look forward to seeing which thrilling design the fans decide to send into action alongside USA Luge’s athletes in Sochi this winter,” said Russell A. Brown, Valiant’s President of Consumer Products, Promotions and Ad Sales.

The newly selected helmet and suit design will be the second Valiant-inspired uniform employed by USA Luge. A corporate sponsor of the team and its athletes since 2012, Valiant also designed the look of USA Luge’s race gear for the 2012-2013 and 2013-2014 World Cup and World Championship seasons with a groundbreaking uniform design patterned after the iconic design of X-O Manowar, the armor-clad hero of Valiant’s flagship comic series.

Now, with four all-new new designs to choose from – Flagship, Racer, Silver Wave, and Stargate – fans are encouraged to select their favorite look and make their voice heard before the final ballots are cast on August 23rd. Visit www.USALuge.com today to cast your vote and bring the USA Luge team one step closer to glory this winter at the Sochi 2014 Olympic Winter Games!