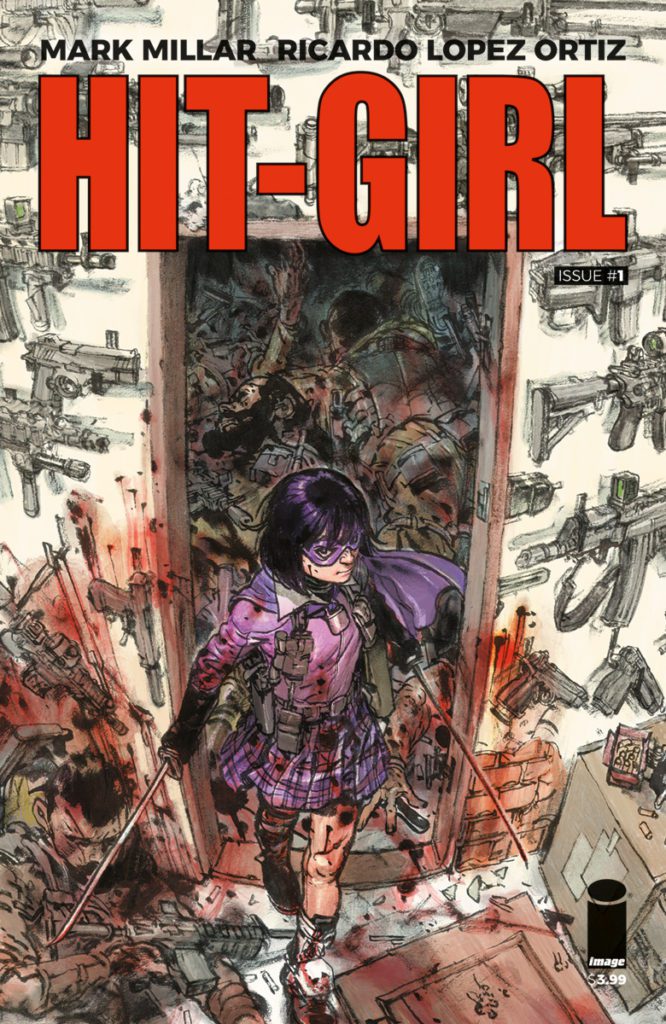 As Kick-Ass made a roaring return to comics, so did one of the books most popular heroines: Hit-Girl. The pint-sized purveyor of her own brand of justice, Hit-Girl has made the leap from comic panel to the big screen and is now back with her biggest assignment yet.

From Mark Millar and Ricardo Lopez Ortiz, we see the street level anti-hero step it up a notch as she travels to Columbia for more than one reason. One of those reasons being hitman Fabio Mendoza, who has been arrested and set to face justice. So what does Hit-Girl want with a fugitive already in custody? You have to read the issue to find out!

We also get a look at Hit-Girl and a new Kick-Ass, not the one from the new series, in a less than stellar performance. It seems our heroine has continued to seek a partner to fight crime with since losing her dad, Big Daddy, back in the original Kick-Ass run. Will she find someone to step up to the plate? What’s the score to settle in Columbia?

Millar created a violent, mature-themed spin-off here with Hit-Girl squarely placed in the middle. Ortiz’s artwork, though different than series regular and co-creator John Romita Jr, fits this title well. His style has a scratchy, frantic vibe to it, which fits given the frantic nature of this debut issue.

I really enjoyed this issue, as it sets up something far larger on the horizon and positions Hit-Girl to become a hero on her own merit. With Kick-Ass and now Hit-Girl returning in the same month, it’s a great time to be a fan of the Millarverse and Image Comics.