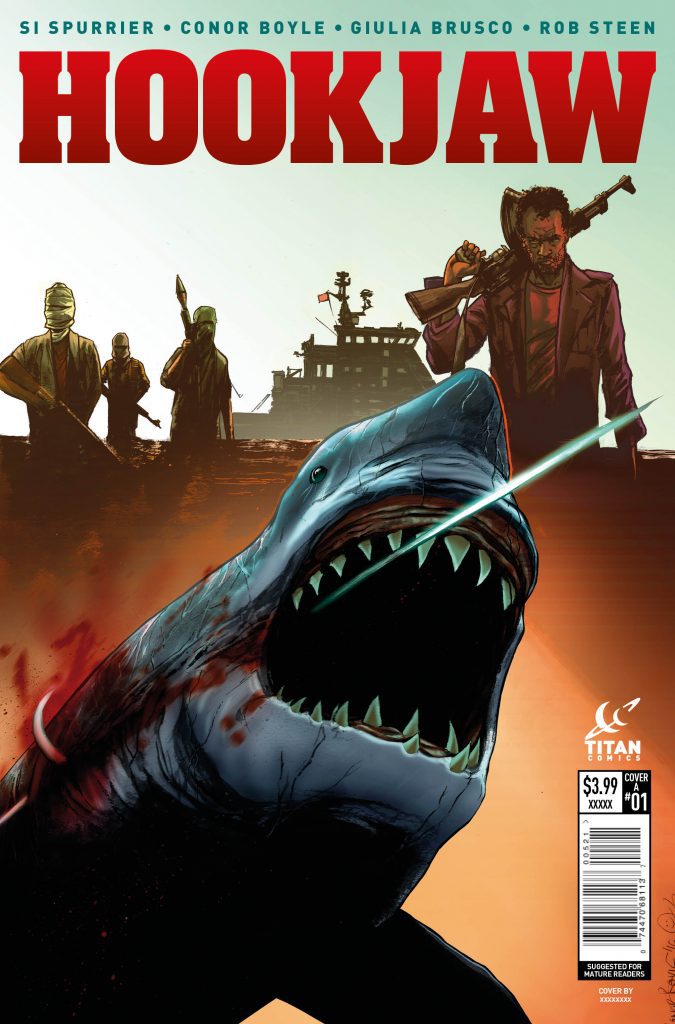 Titan Comics brings sharks to the forefront with Hook Jaw

Just when you thought it was safe to go back in the water, Titan Comics reminds you that it is definitely not. Their debut issue of Hook Jaw takes us on a very scary adventure with some Great White Sharks and the thing they do best” Eat, feeding on anything that comes their way, sometimes people. This story gives us a new perspective of the day in the life of nature’s oldest killing machine.

From writer Simon Spurrior (Cry Havoc) and artist Conor Boyle, the story starts off in a very creepy fashion, with the survivor of some kind of plane or boat accident clinging to a piece of debris trying to stay afloat. As he is hanging on for dear life, we see words as if they are coming from voices that are very much not human. We soon realize by the creepy font of the words and the basic English that it is in fact the sharks communicating with each other, which hasn’t really been done that way in a story before and is downright scary. Well, needless to say, they are talking about nourishment just before we see the man vanish from sight.

After that great opening scene we get introduced to the human characters: a group of scientists on a boat researching the behavior patterns of these sharks. They have discovered that their tagged sharks have been hunting in packs in pretty much the same part of the ocean. All is well until our group has an encounter with Somali pirates until they are rescued by a group of U.S. Navy Seals. Well at least from the pirates. But an even greater danger lies below the surface when the Seal commander soon learns the fate of two of his men, as we all do, when he sees them getting torn apart by the pack of sharks. It is then that we all get our first look at the leader of the pack, the monstrous Hook Jaw!

The Pros: Well written story, beautiful artwork, and excellent way to give us a look into the everyday life of a Great White Shark by using the creepy fonts for their words. By doing so it shows us that those words are definitely not coming from a human.

The Cons: I only have one gripe about Hook Jaw # 1. I don’t like the word usage from the human characters when they are using a curse word. For example, when the old scientist lady talks with that sailors mouth of hers, bad words are done like “S@#t  or F@#K, which I think would of came out better had they just used the actual word instead of trying to beep it out for us. We’re all adults here, it wouldn’t be the first time we’ve heard a bad word.

All in all a great comic: Hook Jaw gives us a horror story that keeps us amazed and gives us a science lesson in the process. I can’t wait for issue #2 to drop.