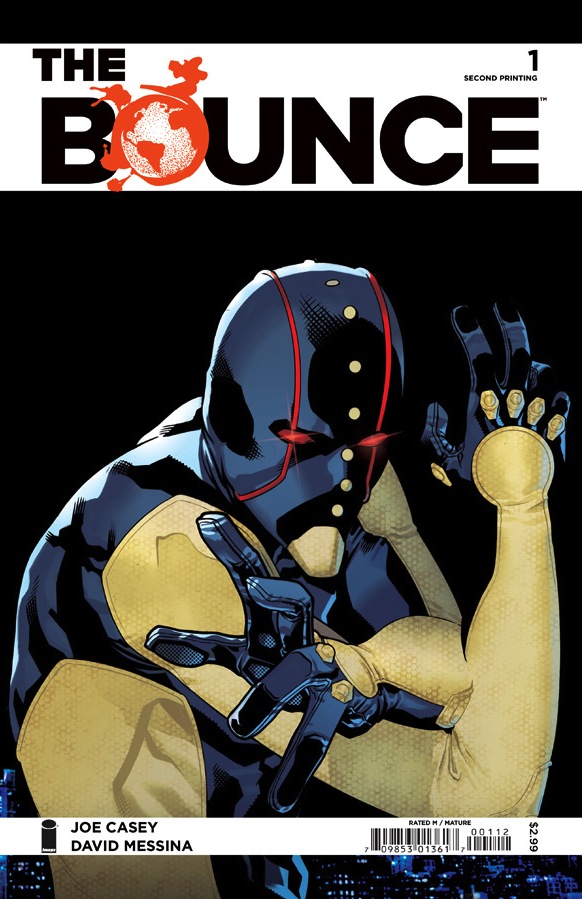 The first issue of Joe Casey’s and David Messina’s new series THE BOUNCE has sold out the same week of its release and will receive a second printing, to be in stores on June 26. THE BOUNCE is a comic about a new kind of superhero, infused with a psychedelic sensibility and definite sense of fun.

“All of us working on THE BOUNCE are more than gratified that people seem to give a damn,” said writer and co-creator Casey. “The first issue is just the beginning, though. Stick around and you won’t be sorry.  Meanwhile, there’s no better feeling in the world than selling out at Image Comics!”

THE BOUNCE #1 has been received with critical success:

“Casey and Messina have delivered a far more honest kind of superhero, and it’s a welcome change of pace.”
– Uproxx

“…off to a strong start with fantastic art and enough zany ideas to make Stan Lee jealous.”
– Unleash the Fanboy

“Casey has revitalized superhero comics in The Bounce #1.”
– Geeks of Doom

The second printing of THE BOUNCE #1 is available for pre-order now (Diamond code APR138113) and will be in stores the same day as the second issue, June 26. THE BOUNCE #2 will feature a special variant cover by Sara Pichelli.

THE BOUNCE follows on the heels of Joe Casey’s hit new series SEX (drawn by Piotr Kowalksi), which has had multiple sell-outs and reprints of its first two issues.

Casey is part of of the creative studio Man of Action.