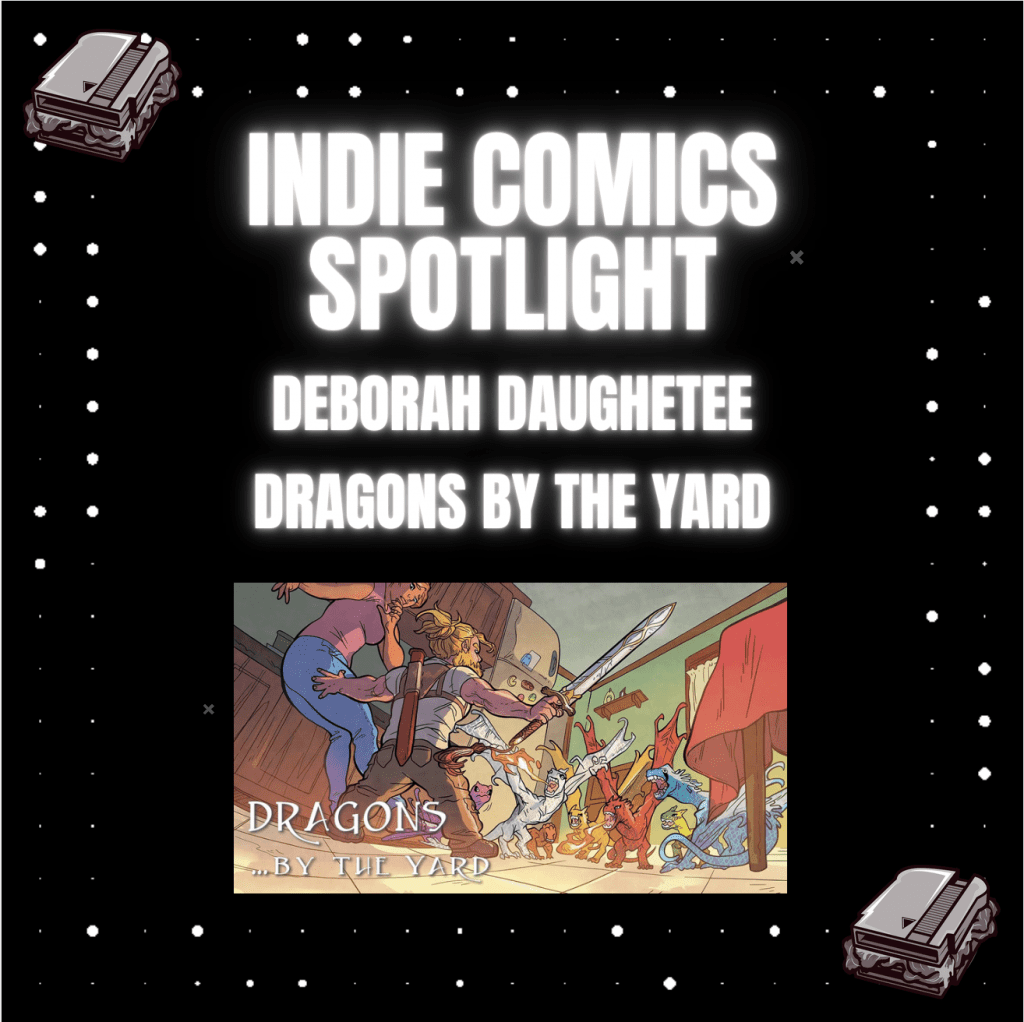 Welcome to Pastrami Nation’s Indie Comics Spotlight! We hope to help spread the word of amazing independent works with our comics and creator spotlights! With this installment, we shine the spotlight on Deborah Daughetee and her current Kickstarter project, Dragons by the Yard.

Deborah Daughetee: “I’m Deborah Daughetee, and I used to write for such television shows as Murder, She Wrote, Touched by an Angel and Dr. Quinn, Medicine Woman. One title, Mary Shelley Presents Tales of the Supernatural, is nominated for the Bram Stoker Award. Nancy Holder adapts the horror short stories of Victorian Women. Mary Shelley and her monster introduce each story. The original prose story is also included in the book.”

“We are currently running a Kickstarter for our title, Dragons by the Yard. Kelly Swails is adapting a short story I wrote about Anna, who loves to sew all things dragon. One day at the Rose Bowl Swapmeet, she meets a mysterious woman with wondrous fabric. They make a deal, and Anna takes the fabric home, sewing up seven little dragons… who come to life. The Kickstarter is for issue #5.”

Deborah Daughetee: “I ended up contracting a rare lung disease that culminated in a double lung transplant in 2017. While I was sick, my agent suggested I adapt a pilot I’d written into graphic novel form. I had read comics as a child but stopped when they all become superhero stories. I really wasn’t sure I wanted to write in that format. So I sent to Alternate Realities, my local comic shop, and Ralph gave me Saga, Y Last Man Standing, among others to read. I got hooked. I had no idea that comic books had come so far. So I took a year to study the form and go to conventions. I subsequently received a large settlement from a lawsuit, and I started Kymera Press. My mission was to create a comic book publishing company using all women writers and artists and to pay them a decent Indie rate. I adapted a pilot I wrote during my television tenure into graphic novel form. We now publish five titles with all-female creative teams.”

Deborah Daughetee: “I’m going to talk about my influences in business instead of in writing. I met Madeleine Holly-Rosen, who writes The Boston Metaphysical Society, at my very first con in Long Beach. She was very generous with her advice on how to set up our booth to make it more interesting. At this point, I only had two issues of Gates of Midnight and nothing else. Madeleine has continued to be a valued friend who helps me out from time to time. She has written a book on Kickstarter, which is my bible.”

“The other influence is Russell Noehlty of Wannabe Press. Russell and I were on the same panel at a convention, and I knew I had to get to know him. Russell has also been extremely generous with his help. He has some great workshops online as well.”

Deborah Daughetee: “Dragons by the Yard is my dream project. Kelly Swails (US) had done a great adaptation of my story, keeping my sensibilities while bringing in her sense of humor. Our artist, Paola Amorino (Italy), brings a beautiful sense of whimsy to the characters. She knows precisely which dragon is which, and when our colorist gets it wrong, she lets us know. Our inker is Laurie Foster (US), and she does the inks for all of our titles. That’s how good she is. Sandra Molina (Spain) was our colorist on the first four issues. She left to become an art director, and now we have the wonderful Lizz Buenaventura (Philippines). Both Sandra And Lizz bring bright colors that, as one interviewer said, “…is a feast for the eyes.” Finally, Saida Tempfonte is our letterer. Again she letters all of our titles; she’s just that good. It’s a dream team, to be sure.”

Deborah Daughetee: “Our website is Kymerapress.com. We have a shop where you can buy any of our titles. Our graphic novels are also on Amazon. We are on Facebook, Twitter, Instagram, all under Kymera Press. I also have a Dragons by the Yard Group page, so you search for Dragons, and you can join.”

Make sure to support this project today on Kickstarter at https://www.kickstarter.com/projects/maryshelleypresents/dragons-by-the-yard/.