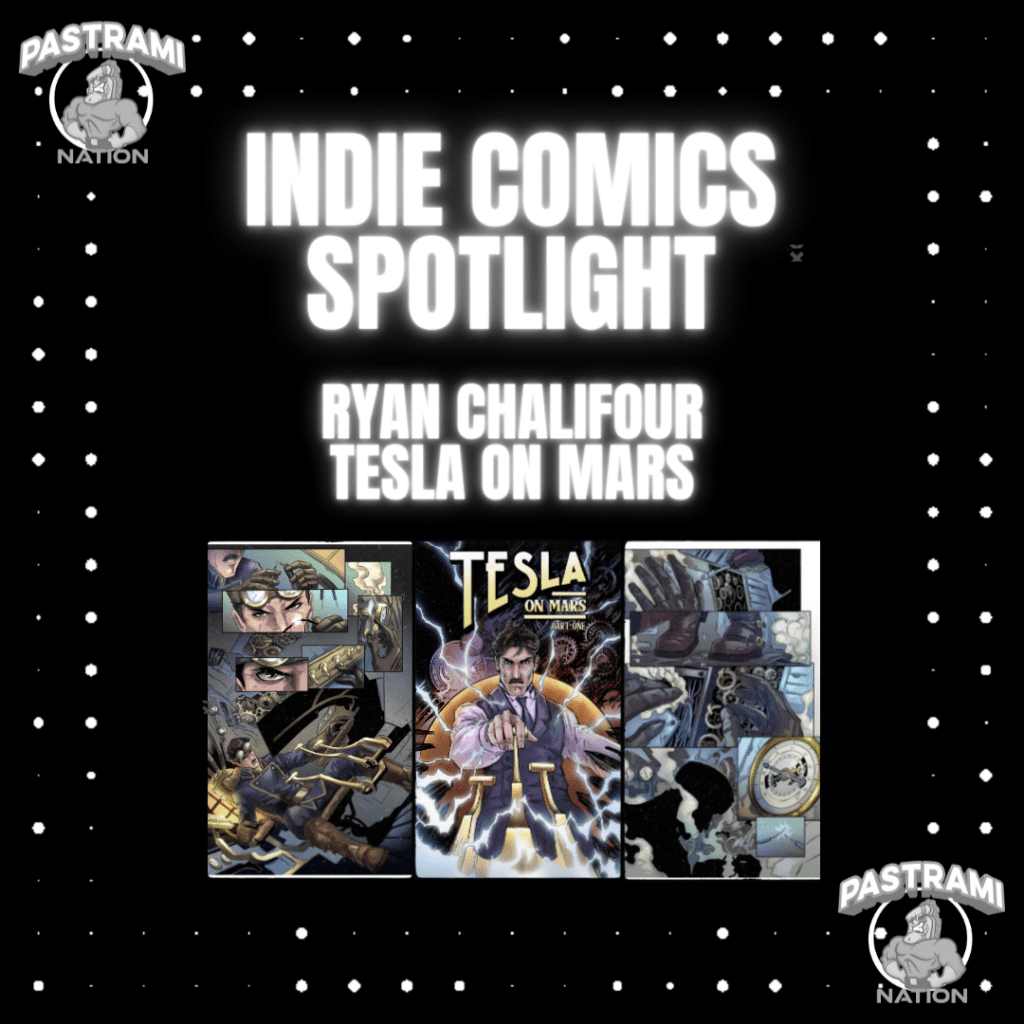 Welcome to Pastrami Nation’s Indie Comics Spotlight! We hope to help spread the word of amazing independent works with our comics and creator spotlights! With this installment, we take a look at a brand new Kickstarter project- Tesla on Mars.

What’s the book about? Here is the description straight from the Kickstarter campaign.

“Working in secret, the eccentric genius Nikola Tesla has built a machine that can transport him through time and space in an instant. Traveling to Mars in search of life, Tesla is confronted with unexpected mysteries, a shadowy secret society, and terrors from outer space.”

We spoke with Lead Author and Artist Ryan Chalifour about his new comic book from Obscuras Comics, his career, and more!

Ryan Chalifour: I’m a freelancer that’s been working as an artist full-time for about five years. That’s involved everything from comics to animation, to sculpture, and even to a somewhat failed attempt at becoming a fine-art oil painter.

The current project is Tesla on Mars, which is the first title being published by the studio I co-founded with my partner Ashley Mills. It’s a steampunk/science fiction comic which takes a lot of cues from early sci-fi stories like Journey to the Center of the Earth and basically everything else from Jules Verne. We wanted to make something unabashedly fun, but with some gritty and even horror-inspired details as well. So we’re getting into the territory of secret societies/cults, lost civilizations, space travel, and just really opening the flood gates on how much action we can bring into the story concept. This is not the Tesla from your history books, but with someone who was as secretive as he was… who knows, maybe it is? 🙂

Ryan Chalifour: It’s comics that got me started as an artist, so it’s suiting to come back to it. I took an interest in comics during the 90s boom since all of a sudden, comics were everywhere. I got some, fell in love with visual storytelling, and started trying to make some when I was around 12. It didn’t work so well because I had no idea what to write. I could draw a bit, but that was it, so I only ever drew a few pages. BUT it got me started and put that idea in my head of becoming a comic artist. I was reading anything I could get my hands on at the time.

Ryan Chalifour: Jim Lee and J. Scott Campbell made a big impact on me, but also artists like Budd Root and later on Frank Frazetta. Now, it’s kind of all over the place. There isn’t one particular style I gravitate towards more than another; it’s more about good composition and compelling storytelling. If the page pulls me in because it’s impressive on a technical level, style kind of comes second to that.

Ryan Chalifour: A dream project? This is it! I get to make a steampunk comic, working with a great team of artists, and we can do whatever we want with it? That’s going to be hard to top. Even better might be something like expanding it into an animation, but we’re not actually looking to do anything that wild right now.

Ryan Chalifour: As a new studio, we’re still working on building an online presence. The best way to keep updated and follow this project is on our Instagram, https://www.instagram.com/obscurascomics/.

Make sure to check out and support Tesla on Mars on Kickstarter at https://www.kickstarter.com/projects/obscurascomics/tesla-on-mars-part-one/.