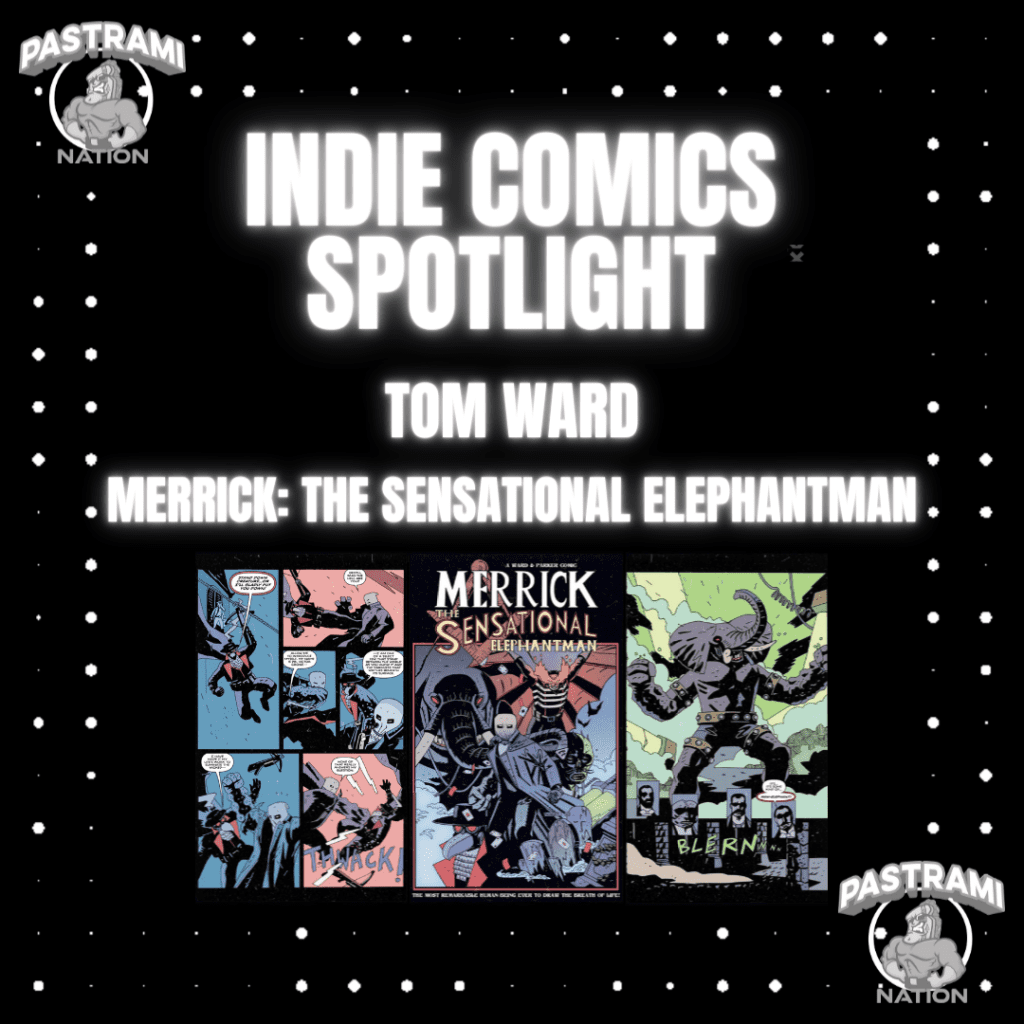 Welcome to Pastrami Nation’s Indie Comics Spotlight! We hope to help spread the word of amazing independent works with our comics and creator spotlights! With this installment, we shine the spotlight on Tom Ward and his comic book- Merrick: The Sensational Elephantman.

So, what’s it about?

Merrick: The Sensational Elephantman is a Victorian pulp adventure comic set in 1880s London. Based on a fictional version of the life of Joseph Merrick, it steps between historical facts and turn-of-the-century folklore juxtaposed with the American superhero comic conventions of super powers, masks, secret identities, and fantastic adventures.

Volume 2 is currently up on Kickstarter right now, with a chance to snag Volume 1 as well for new readers like myself. You can find the project HERE.

We had the chance to chat with Tom Ward virtually about Merrick and his life in the comic book world.

Tom Ward: “My name is Tom Ward; I’m from Liverpool, England. Our current project is a Kickstarter to fund the print run of the second collected edition trade paperback of our comic series Merrick: The Sensational Elephantman.”

“The volume 2 collection contains issues #5-8, which contains two story arcs. ‘The Gambler’s Cards’ in which The Elephantman battles Spring-Heeled Jack for a set of magic cards that can thwart the Devil. And ‘Monsters,’ where Merrick must come face to face with not only his own past but also the Lovecraftian maggot diety Phu-ggogot. On top of that, it also includes Merrick & Crowe #1, which was the first Kickstarter cross-over comic, which I co-wrote with Corey Fryia, and features his character Doctor Crowe in an adventure alongside Merrick.”

Tom Ward: “I’ve been reading comics since almost as long as I can remember, starting with The Beano and Dandy, Asterix, and Tintin. I then moved on to superhero books and indie stuff. It was only a matter of time before I decided I should try my hand at creating my own comic, a natural extension of being a fan. I started working on the scripts to Merrick and then eventually teamed up with artist Luke Parker. We released the first issue as a free download in Feb 2014 (which is still available for free at www.merrickcomic.co.uk), and on the same day we launched our first Kickstarter for the first four issues. Since then, we’ve released 11 issues, a prequel one-shot graphic novella, a collected trade paperback, and the first-ever Kickstarter cross-over issue. I’ve also been published in numerous anthologies, and Luke has had work published by both Image Comics and Dark Horse.”

Tom Ward: “My biggest influence is punk rock and the DIY ethos that comes with it. But my favourite comic writers are probably a little cliche, Brian K Vaughan, Alan Moore, Frank Miller, Matt Wagner, and Robert Kirkman. Not only do I love their writing but also their approaches to comics.”

“I think as we’ve progressed, my style has also been largely influenced by the way we make comics and what works best for crowdfunding. To optimise the budget, I try to write in a compressed style to fit as much in an issue as I can. We also don’t limit ourselves to a standard page count, so we can do whatever serves the story best, using oversize issues rather than two issues with filler.”

Tom Ward: “To be honest, this is my dream project. An ongoing series that I can do absolutely whatever I want in. I can play around in different genres within the confines of the series, and now we have enough issues to play with continuity, which is one of my favourite aspects of comics. I just hope we can keep going and become a truly long-running series; I’ve always had the ending and general overarching story to Merrick in mind

since its inception, and I hope we can see it out to the end.”

You can find our latest Kickstarter at https://www.kickstarter.com/projects/ourtom/merrick-the-sensational-elephantman-volume-2-tpb.

Our online store is www.merrickcomic.co.uk, where you can also download our first issue for free.