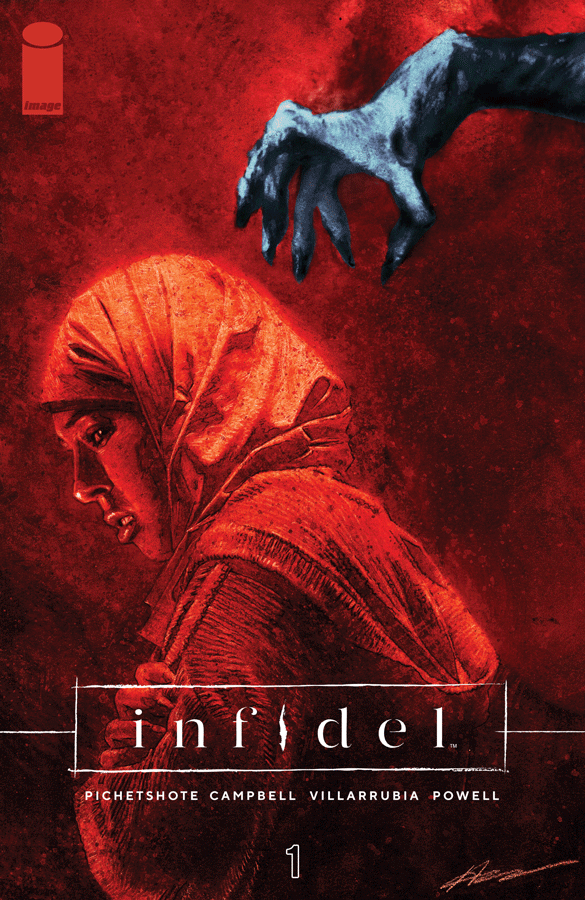 This week, I picked up a book purely by the cover, as it really caught my attention. I didn’t know any of the creators of the book, but I know that Image Comics has had some amazing series since its inception, so I figured, why not? So I picked up Infidel #1, and I am glad I did.

The miniseries centers around Aisha, a Muslim woman and Tom, her husband, and Tom’s daughter, all of whom moved in with Tom’s mother Leslie at a building that was the scene of a horrific crime. We see glimpses of the evil within right from the get-go with Aisha’s dreams, followed by what is seen throughout the issue. But a supernatural evil is not the only one lurking around, as modern-day racism takes center stage, and from Leslie most of all.

From writer Pornsak Pichetshote, making his comics-writing debut with this title, artist Aaron Campbell, colorist and editor Jose Villarrubia, and letterer/designer Jeff Powell, we get quite the kick off for this mini-series. Pichetshote crafts a gripping world right from the beginning, making Aisha instantly likable and relatable- she edits Star Wars comics for a living, I think most readers would love to hang out with her. He also blurs the line between love and hate as we try to see what Leslie’s true intentions are. With the cliffhanger we get, we will be wondering for the next month! Campbell’s artwork is perfect for this title, rooted in the real world with supernatural overtones. The colors, the letters, everything works, everything pulls you in and leaves the reader wanting more.

I’m hooked Image Comics. You got me for another series because Infidel #1 is a debut issue filled with drama, intrigue, and heart. Go check this mature reader title out, it’s going places.