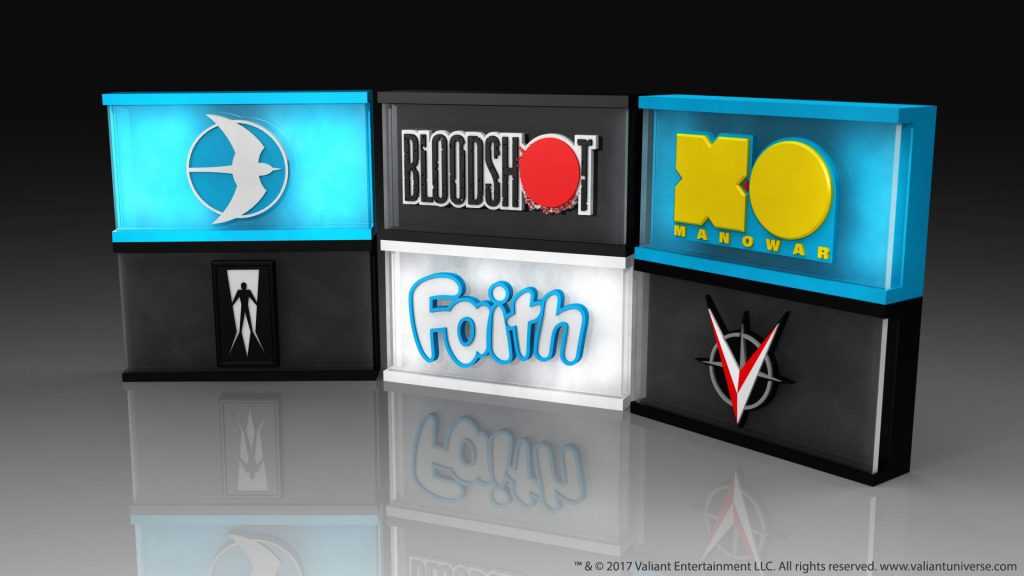 Light the Night the Valiant Way with New InLightz

By Staff Reports
InLightz, the exclusive designer of LED logo boxes for fans and enthusiasts, is proud to announce a new partnership with Valiant Entertainment. For the first time ever, the renowned publisher’s line-up of critically acclaimed superheroes including X-O Manowar, Faith, Bloodshot, Shadowman, and Harbinger, will shine like never before in three-dimensional LED light boxes that will power up your home, office, and everywhere in between! Hitting comic shop shelves everywhere beginning Second Quarter 2017, no collection will be complete without these superheroic display items!

The new InLightz logo box was developed by company founder Mathew Cianchino, a lifelong comic book, movie and gaming enthusiast. He was inspired to create this product as he searched for a way to showcase his favorite superheroes at his desk.  Since there was nothing like this on the market, he designed a back-lit, three-dimensional LED box that could display fun, colorful logos.

In collaboration with Michael Chiriac, InLightz has produced a product that fits enthusiast’s many passions. Fans of all ages will have the ability to interchange logos as they hunt to collect the entire Valiant Universe.

“Valiant is home to some of the most iconic superheroes in comics. From Bloodshot to Harbinger to Shadowman to X-O Manowar, our characters are becoming increasingly recognized by comics and pop culture enthusiasts across the country,” said Russell A. Brown, Valiant’s President, Consumer Products, Promotions & Ad Sales. “InLightz is a truly innovative way to display the bold iconography of the Valiant Universe, and we’re thrilled to partner with them for this fun and interactive product that will catch the eye of fans everywhere.”

The LED logo box features include:

InLightz is dedicated to providing a totally unique way for fans to showcase their enthusiasm for what they love. It is the first and only company to offer collectible, illuminated logo boxes that can be transported anywhere. Whether it be superheroes or villains, sports teams, automotive, games or movies, we want to make sure that our products light up our customers’ passions. Find more information at www.InLightz.com or follow us on Facebook (InLightz).

Valiant Entertainment is a leading character-based entertainment company that owns the largest independent superhero universe in comics. With more than 80 million issues sold and a library of over 2,000 characters, including X-O Manowar, Bloodshot, Harbinger, Shadowman, Archer & Armstrong, and many more, Valiant is one of the most successful publishers in the history of the comic book medium. Today, the company’s characters continue to be forged in publishing, licensing, film, video games, and beyond. Valiant consistently produces some of the most critically acclaimed comics in the industry and has received numerous industry awards and accolades, including a Diamond Gem Award for Comic Book Publisher of the Year. Visit them online at ValiantUniverse.com.