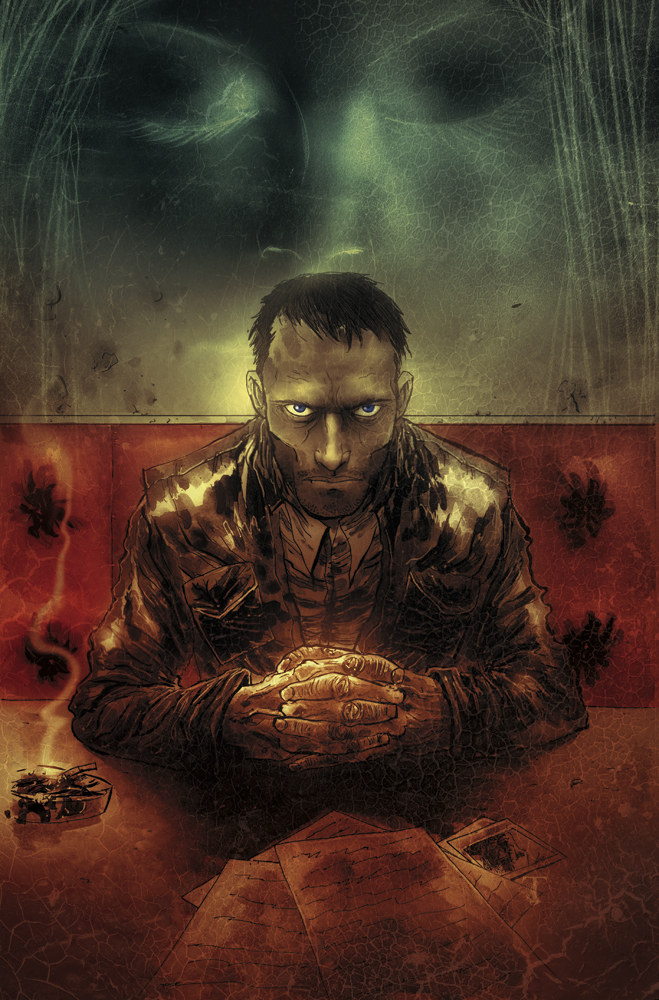 Joe’s Comics are Back with Ten Grand from Image Comics

Straczynski and Templesmith on a book? YES!

Joe’s Comics, J. Michael Straczynski’s (Babylon 5, Midnight Nation) comic imprint is back with a vengeance this May with Ten Grand, which teams the famed writer with one of my favorite artists, Ben Templesmith (30 Days of Night, Fell). For me, this is turning into a dream book:  I’ve always been a huge fan of Straczynski’s writing, from his Joe’s Comics books to his run on Amazing Spider-Man all the way to his more current Superman: Earth One. Templesmith’s style is one that stands head and shoulders above the rest. Put the two together, throw in some demons and violence…what more could you ask for?

Check out the press release from Image below:

The solicitations that went out the weekend of February 16th confirm the news: the relaunch of Joe’s Comics, the imprint that created Midnight Nation and Rising Stars, is officially underway with the first of what will be an entire line of new, original titles.

TEN GRAND, the first title to come out from Joe’s Comics, will be published by Image Comics and officially debut May 1st, with a convention variant to be unveiled at C2E2 in Chicago the week before.

The premise: Joe Fitzgerald was a mob enforcer until the day he met Laura, who convinced him to leave that world behind. Before quitting, Joe agrees to one last job, little realizing that the man he’s been sent to kill was deeply involved in demonlogy. He survives Joe’s attempt and comes after him, fatally wounding Joe and killing Laura. As he lies dying, an angelic force promises that if Joel agrees to work for them as a different kind of enforcer, they will bring him to life and keep on bringing him to life every time he is killed in a righteous cause. The reward: for those five minutes of death, he will be with Laura again. Would you endure an eternity of pain and death, dying over and over, to be with the woman you love for just five minutes each time you died? Most people might say no. But Joe Fitzgerald isn’t most people.

The return of Joe’s Comics has been in the works for several years, awaiting the right time to go forth.

“The temptation to bring back Joe’s Comics has been very powerful over the last few years,” said creator J. Michael Straczynski, “but I really wanted to wait until I had a collection of stories that I absolutely had to tell, that, like Midnight Nation, wouldn’t let me go until they were told. Stories that could be dark, funny, deeply personal but also played out on a large stage in terms of action. As those started to show up over the last few years – often in the middle of the night, which is why Joe’s Comics bears the slugline ‘where it’s always five minute to midnight’ – I began to pull them together until I felt I had what I needed, and made the deal with Image to move forward.”

The art on TEN GRAND (interiors and covers) is being provided by Ben Templesmith, the New York Times best-selling Australian comic artist and writer most widely known for co-creating 30 Days of Night with Steve Niles and Fell with Warren Ellis.

“How could I say no to working with the guy that created Babylon 5, that fairly well shaped how I think about science fiction and long form TV?” Templesmith said. “It was an honor to be asked and I can but hope to rise to the occasion.”

Issues #1 and #2 will also feature variant covers by Bill Sienkiewicz as well as Phantom variants. Like the other Joe’s Comics titles, TEN GRAND will run in twelve-issue installments, with two to three months in between each installment to make any corrections and get ahead on finished books.

“Watching this project come together with JMS and Ben has been thrilling,” said Patricia Tallman, CEO of Studio JMS, parent company of Joe’s Comics. “The ideas and concepts flying between them are so edgy and awesome, I can’t wait to share them with fans everywhere. Hang on, you’re in for one hell of a ride!”

Phil Smith, production editor for Joe’s Comics, had this to say: “Whenever someone suggests a small way to do something, Joe comes back with ‘Why don’t we do it bigger?’ Bigger? In an age of figuring how to get something for nothing, Joe is pushing himself and his work to the cutting edge. Tapping not just the best creators but the right creators to express, not just his ideas, but their artistic ideas through his name branded line of books, will, again, set a new standard in the world of creator-owned works.”

“The most important thing we would do with this launch was, and is, to ensure that the issues hit retailers on schedule,” Straczynski said. “So we started early, stockpiling scripts and art. We had our first lettered, finished issue last November, for a book that wouldn’t be coming out until May.”

In keeping with the innovation and experimentation that has been the hallmark of Joe’s Comics, readers will find a QR code in the back of the first issue that will lead them directly to an audio performance of the book’s dialogue by some of the top voice actors in the business, including Babylon 5 alumnus Robin Atkin Downes, Yuri Lowenthal and Tara Platt.

“We wanted to give readers an option of reading the book in the usual way, or sitting back to listen to the parts being performed while enjoying Ben’s amazing artwork. We’re very happy with how the first staged reading worked out,” Straczynski said, “and if there’s enough demand, we may do more of these in the future.”

TEN GRAND #1 is available for pre-order in the March issue of Previews.

SIDEKICK, the second title to be launched from Joe’s Comics, will debut at Comic-Con International in San Diego with a convention variant. This will be followed in the fall by ALONE and PROTECTORS, INC. (artist announcements pending).

Here’s what some of the best lights in the comics business have to say about the first issue of TEN GRAND:

“Ten Grand is grim and ugly and disturbing … which is exactly the way it’s supposed to be. This is Straczynski and Templesmith doing what they do best.”
– Ron Marz (Witchblade, Artifacts, Shinku, Green Lantern)

“Straczynski’s new book brings the supernatural back down to earth in a way we haven’t seen since John Constantine – all the way down to the bar, the back-alley and the gutter. Joe Fitzgerald is a hitman with values. Straczynki’s hard-edged narrative is perfectly matched with Ben Templesmith’s raw, uncompromising and hopefully beer-stained art.”
– David Hine (Spawn, The Darkness, Bulletproof Coffin, Storm Dogs)

“With Ten Grand, Straczynski and Templesmith deliver a heartbreaking story about a former hitman named Joe who, unfortunately for him and those around him, knows all too well that the reality we all know and love isn’t the only reality out there. No, sir. There’s also a reality where demons run amok, angels communicate by possessing the bodies of strippers, and a special keyboard shows you the real Internet. This is great stuff. More, please!”
– William Harms, award-winning writer of InFamous and Impaler