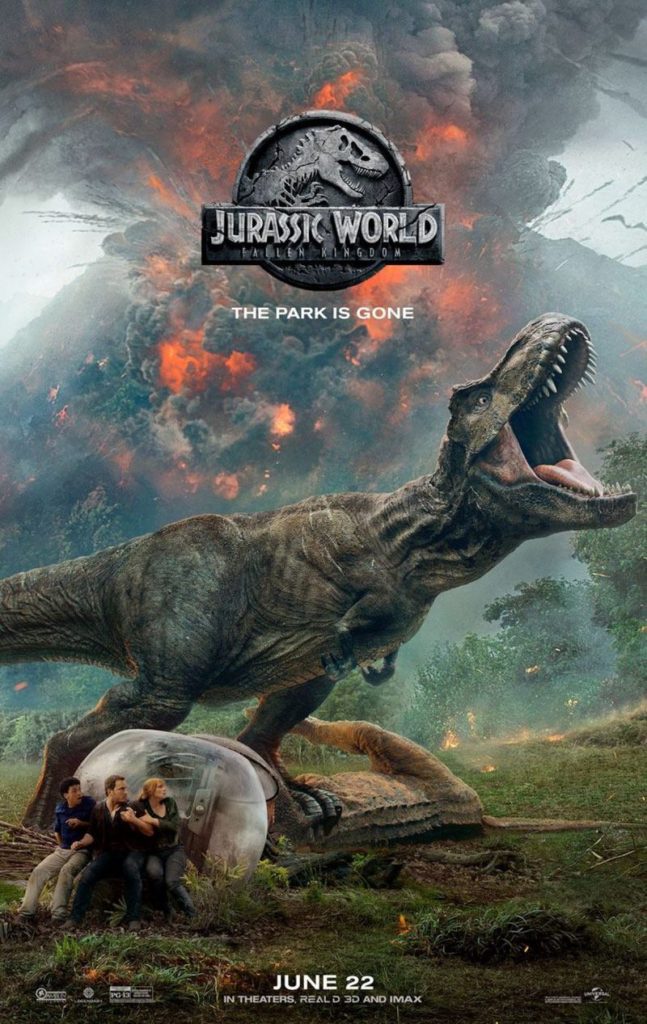 One of , if not, the most anticipated movies of the year has been unleashed in theatres everywhere this past week. Jurassic World Fallen Kingdom is now open and this film does not disappoint. The sequel to the highly successful 2015 Jurassic World and it continues to raise the bar.

Fallen Kingdom takes place four years after Jurassic World was closed down due to the tragic events involving the man made monster known as the Indominus Rex. We get a gritty look into a theme park over run with prehistoric life right from the start, with a group of scientists there on the abandoned Isla Nubar facility searching for the remains of Indominus Rex, seeking out a sample for “research” purposes, before their expedition is interrupted by two different , very big carnivores.

Fast forward a little bit and we are reintroduced to Owen Grady, played by Chris Pratt and Claire Dearing, played by Bryce Dallas Howard, leading a team back to Nubar to try and save as many dinosaurs as they can as all life on the island is now being threatened by a once dormant volcano. Owen, Claire, and the team are being funded by a private firm that has a secret agenda and are escorted by a large military presence to the island, with the primary objective being for Grady to find one dino in particular, the velociraptor Blue.

That’s where things really go south, as the firm is secretly engineering another man made beast and Blue’s DNA is the last ingredient. Enter the Indoraptor, the most dangerous animal to ever walk the Earth. Just picture a velociraptor twice as big with longer arms and longer claws. Dangerous is an understatement. Now you can just imagine how chaotic things would be should this animal ever get loose from its enclosure, which you know it does.

Jurassic World Fallen Kingdom was the perfect sequel with its wide variety of dinosaurs and different twists that kept us on the edge of our seats. Great casting and stunning visual effects make this film a true masterpiece to Jurassic Park fans as well as first timers who like a good movie alike. Please go out and watch this film more than twice, you’ll be surprised at all the extra little Easter eggs you’ll find. Jurassic World Fallen Kingdom is easily one of my all-time favorites.