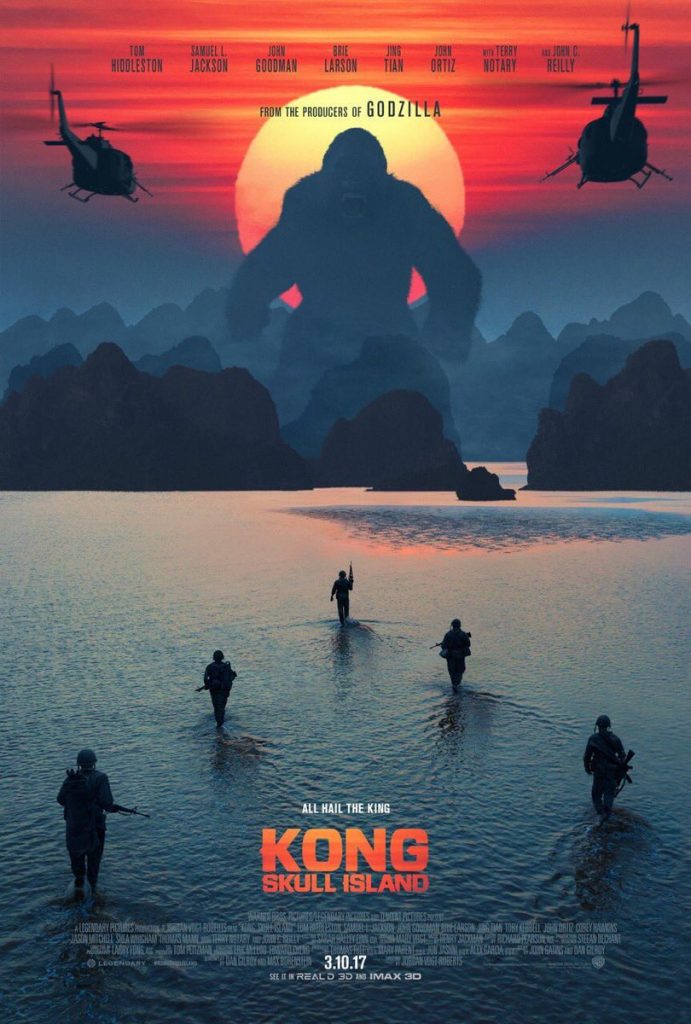 When Peter Jackson brought back the iconic King Kong in 2005, it was a monster success, no pun intended. So when it was announced that the giant sized gorilla would be getting a reboot, of course people were nervous. Jackson’s King Kong was fantastic, and hard to top, for sure. So did Kong: Skull Island reclaim the crown?

Directed by Jordan Vogt-Roberts, and starring John Goodman, Tom Hiddleston, Samuel L. Jackson, Brie Larson and John C. Reilly, Skull Island is a whole new story to add to the King Kong mythos. When a team of scientists, soldiers and explorers head to the uncharted Skull Island, they not only encounter the guardian of the island, Kong, but a tribe that includes a long lost American pilot (John C. Reilly), and dangerous, underground monsters that threaten the land. Each person on the trip has their own reason: for Bill (Goodman), its to discover a monster like the one he saw terrorize his childhood. For Mason (Larson), its to capture the essence of life on this undiscovered land through a camera lens. For tracker James Conrad (Hiddleston), it’s a quick buck in a lost world. For military man Preston Packard (Jackson), its finding and keeping a purpose right before he was going to be shipped back home.

The fight scenes here are fantastic- to see Kong battle against humans, monsters, giant squids, and more is a sight for the audiences’ eyes. Kong is now massively huge, far bigger than the Jackson film version. But of course, that is to be expected since Kong is to take on the Godzilla in a future film. The high impact fights are what people expect when they buy a ticket for a Kong film, and this film delivered big time. The human characters do a fantastic job here as well, with Reilly’s Hank Marlow stealing the show with his offbeat humor and emotional connections.

Also, one thing to note is to make sure you stay until after the credits, as one of the best end credit scenes belongs to this film. Kong: Skull Island is the opening film to a new monster renaissance, and I, for one, cannot wait to see what happens next.