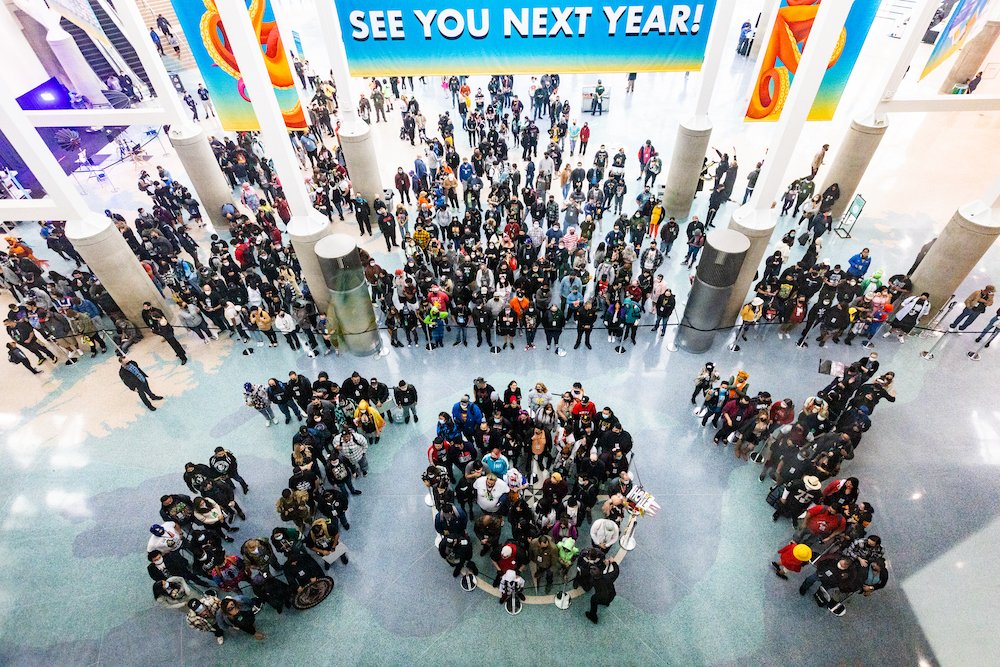 “There was a sense of joyous relief among fans, exhibitors and talent to be back,” said Chris DeMoulin, CEO at Comikaze Entertainment, L.A. Comic Con’s parent company. “We couldn’t be more thrilled that nearly 95,000 fans were able to join us this past weekend. Given the vaccination status of most 2–11-year-olds, it’s not surprising that those fans were the bulk (74%) of our decline – almost 21,000 fewer from 2019 – and we fully support their parents’ decisions to stay home this year. For the tens of thousands 12+ who were able to join us, it was a weekend full of friends, panels, celebrities, shopping, cosplay, gaming, discovery, and fun. We had full COVID-19 precautions in place and are happy to report that 98% of our attendees came with proof of vaccination or a negative test – and the 2% who didn’t get free tests onsite, and only seven received positive tests and had to go home. Only three attendees were made to leave because they refused to remain masked once inside the show.”
For those who stayed home, a digital pass was available, and over 50 hours of programming was streamed in the Comic Con Metaverse by Vatom.  Fans can still access that content for 30 days.

Happy exhibitors reported that most had achieved their sales goals for the show by close of business Saturday, and over one-third re-booked Sunday to come back in 2022. Fans and talent were thrilled to be able to see each other again and past records were shattered as over 8,000 autographs and photographs were purchased by fans, commemorating meeting their favorite celebrities. The new Gaming & Anime pavilion in West Hall debuted Saturday morning and more than 30,000 attendees explored the Tiltify Arena stage activations, the MSI gaming LAN, the AVOX signing areas and more.

Here are just some of the highlights from an amazing weekend:

L.A. Comic Con and PCB Productions, a cross-platform content creation company for interactive, VR, film, television, and emerging media, have joined forces to produce and present AVOX 2022: The Actors Voice Over Expo — a gathering like no other to celebrate the talent and performances in video games, anime, and animation, which is set for July 2–3, 2022 at the Pasadena Convention Center in Pasadena, California. Chris DeMoulin, CEO at Comikaze Entertainment, and Keith Arem, CEO of PCB Productions made the announcement Saturday on the Tiltify Arena Stage in the West Hall.

AVOX 2022 will consist of special appearances, unique performances, exclusive panels, private signings, and sneak peeks with more than 150 of the biggest names in voice acting from some of the most popular shows, movies, and video games. Fans will have a personal opportunity to meet their favorite stars as creators and performers share their talents, experiences, and professional advice. Audiences will get a chance to challenge their favorite stars, social media influencers, and commentators in casual and competitive gaming live onstage.

“We are excited to partner with PCB Productions. L.A. Comic Con had been looking to expand into gaming and anime given feedback from our fans. LA is a huge gaming market, and anime and gaming complement our current show content perfectly,” said Chris DeMoulin, CEO at Comikaze Entertainment, L.A. Comic Con’s parent company. “L.A. Comic Con’s motto is ‘by the fans, for the fans,’ and the AVOX format will be ‘by the talent, for the fans’ as a result of our partnership with PCB.”

The event will consist of 4 unique experiences guaranteed to every ticket holder:

Characters will come to life in a whole new way as more than 150 voice actors match a face to thousands of voices. Attendees will hear the stories of how some of their favorite titles were made and gain valuable insight into an industry often hidden behind the microphone.

“Teaming up with LA Comic Con for AVOX 2022, especially after what we were able to produce together for this year’s Con, was a natural and perfect fit,” said Keith Arem, CEO of PCB Productions. “This is going to be a different kind of show, a different kind of experience, it’s meant for the fan who wants a more in-depth interaction with the talent.”

PCB Productions are the preeminent directors and performance producers for voice acting roles in gaming and anime and is behind many popular video game franchises including Persona, Call of Duty, Monster Hunter and Yakuza.

A Star Trek Experience
LA Comic Con teamed up with Atomic Studios for a celebration of all things Star Trek, while honoring Nichelle Nichols (Lt. Uhura) and her contribution to society and pop culture. More than 20 cast members from several iterations of Star Trek shows and movies were in attendance. Over 35,000-square feet of exhibit space was dedicated to all-things Star Trek and space exploration.

West Hall Expansion Featuring eSports, Gaming, and Anime
LA Comic Con partnered with PCB Productions for a first-ever expansion into the West Hall. Fans were afforded the opportunity to watch competitive gaming on the Tiltify Arena stage, play PC games on high-end computers sponsored by MSI, attend workshops, and interact with some of the top video game and Anime voice-over talent in the industry.

Meet the Cast of: Demon Slayer
Demon Slayer actors Abby Trott (Nezuko Kamado), Billy Kametz (Rui), and Erika Harlacher (Shinobu Kocho) came together to discuss what it’s like being on the show, recount some of their favorite moments, and what they’re looking forward to next.

Sideshow
Pop culture giant Sideshow exhibited at Los Angeles Comic Con for the very first time. Sideshow’s booth featured high end collectibles inspired by and from the worlds of Marvel, DC, Star Wars, and more — including many that made their first physical convention debut.

Laugh Factory Comedy Show
Iconic comedy club Laugh Factory took over the Main Stage on Friday night with an exciting two-hour lineup. Fans gathered in front of the mainstage and kicked off their LA Comic Con weekend with more than a dozen rising comedy stars.

SpongeBob SquarePants
SpongeBob and Squidward are two of the most iconic animated characters ever created, and part of what makes them so recognizable and beloved are their unique voices. Tom Kenny (SpongeBob SquarePants) and Roger Bumpass (Squidward Tentacles) discussed one of the best loved, longest running shows in television history in a lively panel discussion.

Boy Meets World
From 1993–2000, Boy Meets World explored the trials and tribulations of growing up in the 1990s. Will Friedle (Eric Matthews), William Daniels (George Feeny), and Rider Strong (Shawn Hunter) chatted about this successful and popular series in a panel discussion.

Smallville Nights
Billed as a Smallville-themed comedy night, Tom Welling (Clark Kent/Superman) and Michael Rosenbaum (Lex Luthor) read scenes from the series and invited fans to participate during this interactive look at the show.

Eras of Batman
Londyn Jackson moderated a fascinating panel discussion entitled Eras of Batman featuring Kevin Conroy, who has portrayed the Dark Knight more times and, in more media, than anyone else, and actors Will Friedle (Batman Beyond), and John Glover (The New Batman Adventures). The trio discussed all things Batman and how they came to play their characters.

Spotlight on Bruce Campbell
Popular cult film actor Bruce Campbell was featured in an LA Comic Con Spotlight. In the late 1970s, Bruce Campbell and Sam Raimi collaborated on a horror short called Within the Woods, which became The Evil Dead (1981) which Campbell co-produced and starred in as Ash Williams. Campbell and Raimi followed with Evil Dead 2 in 1987, and Army of Darkness in 1992. Campbell reprised the role of Ash in the Showtime series Ash vs Evil Dead for three seasons from 2015–2018. His credits include Burn Notice, Bubba Ho-Tep, and much more.

Spotlight on Zachary Levi
LA Comic Con presented a spotlight on Zachary Levi, an accomplished actor, singer, and dancer, who has appeared in films, on television, and on Broadway. Most notably, Levi starred as the title character in Shazam! in 2019, and Chuck Bartowski in Chuck from 2007–2012. The Louisiana-native has also played the Asgardian Fandral in Thor: The Dark World and Thor: Ragnarok.

The Mandalorian
In a discussion with moderator Stephen Kramer Glickman, Ming-Na Wen (Fennec Shand) and Giancarlo Esposito (Moff Gideon) regaled convention goers with tales from one of the most innovative production sets ever built as the third season of the poplar Star Wars story, The Mandalorian, gets ready to hit Disney+ in 2022.

The Boys of Summer (Cast from the Sandlot)
The Boys of Summer, more popularly known as the boys from The Sandlot movie – Brandon Adams (Kenny DeNunez), Chauncey Leopardi (Squints), Grant Gelt (Bertram Grover Weeks), Marty York (Yeah Yeah), Thomas Guiry (Scotty Smalls), and Victor DiMattia (Timmy Timmons) – participated in a panel discussion about the making of the film, their foray into worlds of NFTs, the metaverse and merchandising. The cast participated in a Q&A as well and fans had the opportunity to win prizes.

Representation Matters: Telling Our Stories Through Comics
Mariana Da Silva moderated a panel discussion with actor and comedian John Leguizamo and producer and writer Peter Murrieta. The multi-talented Leguizamo has been featured in Bloodline, the John Wick series, the Ice Age franchise, Kick-Ass 2, Dora the Explorer, ER, Summer of Sam, and more. Murrieta is known for Mr. Iglesias, Superior Donuts, Wizards of Waverly Place, and more.

Lucifer
Londyn Jackson moderated a panel discussion about the popular series Lucifer (2016-2021) with actors Lesley-Ann Brandt (Mazikeen) and DB Woodside (Amenadiel). In the series, the devil himself takes up residence in Los Angeles as he tries to better understand humanity.

Julia Bianco moderated a panel discussion entitled What the VOX: Discussing the Difference Between Acting for Animation and Acting for Games with Cissy Jones, Courtenay Taylor,  Krizia Bajos, Arif Zahir, and Damien Hass.